Nick Clegg was one of the big casualties of the UK general election, losing his seat in Sheffield Hallam, but his Liberal Democrat party increased its overall number of MPs to 12.

The Lib Dems made notable gains in Scotland and London, where Sir Vince Cable, the former business secretary, regained his seat. The pro-EU party wants a referendum on the terms of the Brexit deal, and has ruled out a coalition with the Conservatives or Labour.

Sir Vince, who won by nearly 10,000 votes in Twickenham, said that the election could lead the government to take a softer line on the EU single market and customs union.

“I’ve never shirked from political battles,” he said in a concession speech. “In politics you live by the sword and you die by the sword.”

His departure means the next parliament will be without one of the few British politicians with first-hand experience of EU negotiations. He worked as a trade negotiator for the European Commission in the 1990s and subsequently served as an MEP.

The Lib Dems’ total number of seats rose from nine to 12, despite a minimal increase in the share of the national vote. Tim Farron, the party’s leader, and Norman Lamb, the health spokesman, both survived challenges by the Conservatives, while former ministers Sir Ed Davey and Jo Swinson joined Sir Vince in regaining the seats that they had held until 2015.

The party lost out on four more seats by a total of 4,638 votes, finishing second in North East Fife to the Scottish National party by two votes and behind the Conservatives in Richmond Park by 45 votes. 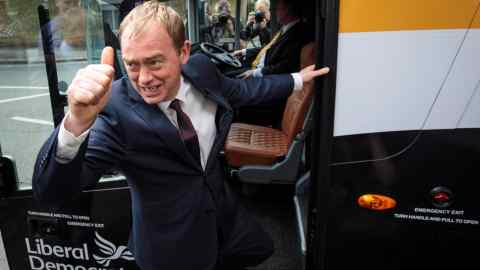 Mr Clegg had represented Sheffield Hallam since 2005, surviving a challenge from Labour in 2015 due in part to tactical support from Conservative voters. In this election, the Tory-supporting Daily Mail newspaper had asked its readers to support Mr Clegg to prevent a Labour victory in the constituency, but the Conservative vote rose sharply nonetheless.

He had appeared relaxed about his prospects in the final days of the campaign, visiting other seats and using a speech in London to set out his case against Brexit. “I have no intention of giving up and neither do the Liberal Democrats,” he said this week, predicting that public opinion would turn as “people begin to feel the Brexit squeeze”.

Video: May's gamble backfires: the night as it unfolded