On London’s Brook’s Mews last week, a grizzly bear had just arrived in a van. Minutes later, the delivery team were hoisting a hippopotamus down a stairwell. Wrapped in a protective blanket, it joined a flock of sheep, a giant grasshopper, a deer and two wild boar at Claridge’s newly opened ArtSpace. Meanwhile, down the road at Ben Brown Fine Arts, a couple of monkeys, a gorilla, some snakes and a crab had taken up residence.

The Mayfair menagerie is now part of Les Lalanne: Makers of Dreams, gallerist Ben Brown’s fifth – and by far his most extensive – London exhibition dedicated to the famed French couple François-Xavier and Claude Lalanne. From today, the two locations will display more than 100 works, both the utterly surreal sculptures and fantastically functional furniture the duo created, mostly in bronze, copper and aluminium, from the 1960s up until their deaths: François-Xavier in 2008, Claude in 2019. “Nobody has ever put on a commercial show this ambitious, not by a long way,” says Brown, adding that the only other possible contender for the biggest Lalanne show of all time was in 2010 at the Musée des Arts Décoratifs in Paris.

It offers both iconic and never-before-shown works. “A huge cabbage is going out here,” says Brown at the entrance of his gallery space, referencing one of Claude’s Choupatte sculptures. “The Lalannes’ work is all about being drawn into another world. It’s very surreal. They were friends with Magritte and Max Ernst.” Inside the gallery black walls, dotted with a night sky of stars, are the backdrop to Claude’s whimsical floral-edged mirrors, swirling tables of Gingko leaves and delicate bamboo branches. While her leafy fronds of cutlery hang in the window, her jewellery is suspended from a cloud.

“The work is made to look floating, effortless,” says the exhibition’s designer Manfredi della Gherardesca, who choreographed Brown’s two previous Lalanne shows in London. A highlight has been “creating a room environment for a unique bed”, he says of Lit Hibou, a bespoke piece created by Claude in 2000 for a private collector. Accompanied by two side tables, it is a fairytale forest of furniture, the intertwining branches of the bedstead watched by an owl. This nighttime dreamscape is counterbalanced by the white cube of Claridge’s ArtSpace. Here, the animal forms by François-Xavier are centred on a group of his early sheep sculptures – “concrete sheep, woolly sheep, baby lambs”, as well as several headless Moutons de Laine ottomans. “Three of the ottomans belong to a friend of mine whose mother bought them in the ’70s, so they’ve never been out of a house on Cheyne Walk before,” says Brown.

Although husband and wife are referred to collectively as Les Lalanne, worked in studios side by side at their home in the village of Ury, south of Paris, and always exhibited together, each had a distinct practice. One rare example of a collaborative piece is on show: the small Guéridon Singe aux Nénuphars table, in which François-Xavier’s sinuous monkey holds aloft a tabletop of Claude’s more textural Ginkgo design. One of the edition (of eight, plus four artist’s proofs) was auctioned at Sotheby’s Paris last year. With an estimate of €150,000-€200,000, it sold for nearly €2mn.

“In the past three or four years, prices have doubled,” says Brown. When he first exhibited their work in 2007, only “between 30 and 45 per cent of the show sold”. Now, following last year’s Les Lalanne exhibitions at the Château de Versailles and The Clark Art Institute in Massachusetts, interest is at a record high among collectors. “They are all horrified at the prices. And I’m like, it’s not my fault,” he laughs. “I mean, it is partly my fault…”

As well as championing Les Lalanne as a dealer, Brown is also one of their most impassioned collectors, joining the likes of Yves Saint Laurent and architect Peter Marino. “Seventy-five per cent of the work on show is mine,” he says, adding that he visited the artists about 50 times over the years. “Very few people buy one or two Lalannes. People either hate them or they get obsessive. It kind of niggles at you. You buy the bear, then you want the chicken feet…”

His most prized pieces? “The hippo bar; we use it every night,” he says referring to François-Xavier’s Hippopotame II, a version of which sold for more than €6mn last year. “And the Sauterelle, the grasshopper bar. There are only two in the world: mine and the Queen’s.” Meanwhile, works for sale include several of François-Xavier’s woolly sheep and a pair of his elephants (Paire de Guéridons Eléphants de Pauline, 2004), as well as two of Claude’s butterfly-strewn hanging lanterns and a table of lotus leaves, a monkey swinging in the base (Table Lotus et Singe Carrée en Bronze, 2013). Prices start at €10,000 for the jewellery, and from €50,000 up to several million euros for the other pieces. 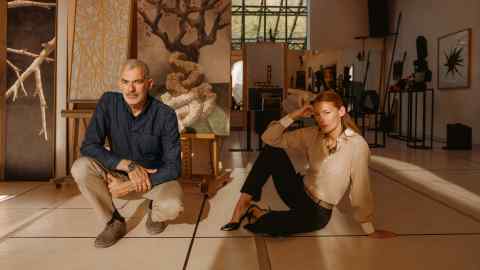 A round table of Gingko leaves will continue to be well used at Brown’s country home. “We’ve had lots of dinners on it,” he says. “That’s what this stuff is for; they are very much meant to be used.” What about Hippopotame I – Francois-Xavier’s bright blue polyester resin sculpture that opens to reveal a bath? Originally designed in the late 1960s – and acquired by Alexina “Teeny” Duchamp, the wife of Marcel – Brown bought his 1998 example two years ago. He says he hasn’t had a soak in it yet – “but I fully intend to”. Until the end of July, however, the hippo will be stationed in Claridge’s lobby, inviting guests to venture into the dream world of these two “absolutely wonderful and completely eccentric” artists.