Dishy of the day – the rise of hospitality chic

These new workwear brands get the *chef’s kiss*

On a recent trip to Tillingham Winery, the stylish vineyard with an outdoor pizza parlour in East Sussex, Sam Millen-Cramer, a 28-year-old marketing strategist, did a spot of shopping. Sitting at lunch, before filling his tote with take-home wine, he whipped out his phone and promptly clicked to buy a pair of crisp cotton trousers – the exact ones his waiter was wearing, in fact.

“I recognised the yellow label on the bum,” he says, of the grey canvas trousers from Service Works, the London-based uniform brand worn by trendy, young chefs. Millen-Cramer had seen them on Instagram. “The loose fit is great, but it’s a very in-the-know brand. That’s what really caught my attention.”

Describing the silhouette as “the perfect length to sit properly over a chunky-tongued New Balance 991” – apparently an elusive trait in ordinary menswear – Millen-Cramer has found his own sartorial flavour in modern chef’s uniforms. And he’s not the only one. Service Works, founded by Tom Chudley in 2020, launched with the aim of creating cool clothes for the kitchen that had a fashionable but performative fit and an easy price point; it’s now sold by retailers including Hip, Blacksmith Store and Peggs & Son. Owner of the latter, Ian Peggs says the trousers are “relaxed and versatile, with an internal drawstring waist that borrows from sportswear”.

Older Studio, the brand that has outfitted staff at Chateau Marmont, Tate Modern and Copenhagen restaurant Barr (a sister to Noma) in its button-down shirts, has seen an uptick in personal orders since offices have reopened, while London-based Ventura/Foreman’s unlined, baggy workers’ suits have whet the appetite of those heading to more casual weddings. In Sydney, Worktones has found broader interest in the boxy jumpsuit it originally designed for the staff of a hotel in the Surry Hills district; so much so that it’s now opened a new street-facing studio that doubles as a shop.

This flourishing customer base was largely ushered in by the pandemic, when chefs were out of work, and uniform brands had no B2B business to cater to. As restaurants adapted by offering street-food takeaways, their outfitters set their sights on those waiting in line. “Sales from ordinary clients completely froze, but products outside our apron offering started selling from our website,” says Worktones founder Huw Bennett of his playful Mortadella caps and loose utilitarian all-in-ones. In lockdown, his wife was wearing her jumpsuit on loop: he realised he was onto something. “We’re now launching a ‘best hits’ of our workwear collection – shirts, a jacket and trousers – to build on B2C demand,” he says.

With elasticated or drawstring waistbands, reinforced hems and silhouettes designed to suit many body types, modern kitchenwear remains an easy sell. That the price point is far less than other utilitarian fashion brands is even better. (Service Works’ classic chef pants cost £59; similar styles from Margaret Howell cost upwards of £200.)

Utilitarian clothes have long been worn out of context: Levi’s jeans – originally designed in 1873 as coveralls for labourers – are now a staple in the modern closet. But the trend for hospitality kit is, however, relatively novel. “We’re the outdoor-reared version of the battery-farmed uniform system,” says Chudley of his trousers, which are made from a washed heavyweight canvas with a worn-in softness. As a former chef, who later worked for fashion brand Billionaire Boys Club and Maharishi, he was inspired by his own kitchen frustrations and designed his own pants.

“The chefwear market is basically run by linen companies who get containers of goods as cheaply as they can, produced in insane volumes, and which get blasted at 100 degrees every day,” says Chudley. “Before starting the brand, I’d only ever had the option of wearing something super-basic.” Older Studio’s shirts are woven in Italy and cut using tailoring techniques (founders Morten Thuesen and Letizia Caramia met while working at Alexander McQueen), while Worktones uses Japanese mercerised cottons.

“My previous uniform was a bit drab, ill-fitting and not very good quality,” says Ryon Ishfaq, from Nottingham-based pizza pop-up Slice ’n’ Brew, of the shift towards more stylish chefwear. A self-professed “lover of decent garb”, he cites brands like YMC, Norse Projects and Universal Works as his closet favourites — and he now wears Service Works both in and out of the kitchen.

Ishfaq says there’s also newfound excitement around the labels. “It’s only recently that I’ve heard chefs actually chew the fat over the workwear they’re looking to buy for the kitchen, as it was never a point of conversation – beyond how essential Birkenstock Bostons were,” he says. But, having embedded themselves among the indie cooking crowd, these new brands have become a creed for chefs. “It’s a certain form of flex for sure,” he says.

HTSI
What Mickey Drexler did next 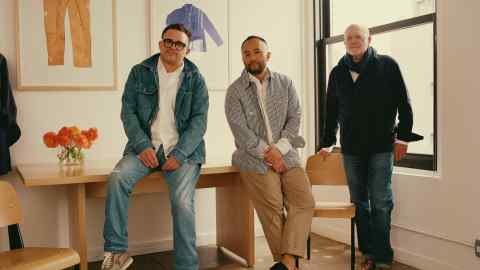 Chefwear is perhaps a natural evolution from restaurant merch. “There’s a cachet in having the jacket from the restaurant or café you like,” says Robert Ventura, who co-founded Ventura/Foreman with his wife, Sophie, in 2018. There’s also a trust attached to taste: restaurant goers are attracted to the aestheteics of a place as much as the food. Clothing is part of that. After Norman’s posted its logo-embroidered jacket on Instagram, Ventura/Foreman was inundated with requests. Soon, the brand will launch with luxury fashion retailers – offering unique colourways that are a specials board version of its classic menu fare.