The head of Stellantis, the world’s fourth largest carmaker, has warned “brutal” environmental policies in the EU risk pricing the middle class out of car ownership.

“The brutality with which change is imposed on this industry is an understatement. It’s completely top down and completely brutal,” he told the FT’s Future of the Car Summit on Wednesday.

“How do we protect freedom of mobility to the middle classes that may not be able to afford to buy €35,000 BEVs [battery electric vehicles] where today for the same conventional product they pay half for it?”

While electric car prices are falling, they are not expected to become cheaper than petrol rivals until the second half of the decade. The overall price of petrol cars is set to rise after 2025 in the EU because of new emissions-reducing technology required by the rules.

The boss of Stellantis, which was created at the start of this year in a merger between Fiat Chrysler and Peugeot-owner PSA, cautioned that “social consequences” and job losses could result if carmakers are unable to protect their margins and offer electric vehicles at an affordable price.

He argued that the industry had not made the choice on the technology supported by policymakers, adding that “we could have been more efficient with multiple technologies”.

Despite the rules, he said the probability of Stellantis, which owns the Jeep, Peugeot and Vauxhall brands, of reducing costs and maintaining margins on electric vehicles by 2025 was “significant”.

JLR chief executive Thierry Bollore told the FT summit that the carmaker is already ahead of its targets for 2021 because of the sale of plug-in hybrid models. He said the carmaker expects to launch only hybrid or electric vehicles after 2025.

Also speaking at the FT summit on Wednesday, UK transport minister Rachel Maclean suggested that Britain would introduce an even tougher emissions system than the EU. “We are going to create our own emissions regime now we’ve left the EU,” she said. “It has provided us with the opportunity to go further.”

Britain’s move to phase out sales of petrol or diesel cars from 2030 has led Stellantis, which owns the Vauxhall plant at Ellesmere Port in the UK, to cancel plans to build a new Vauxhall Astra at the site and instead explore making an electric vehicle. 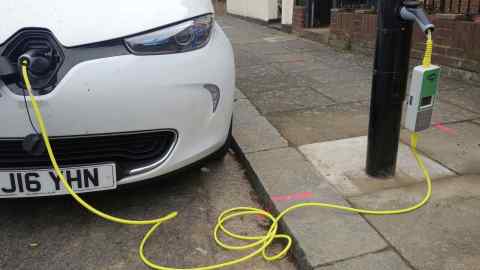 Tavares said talks with the government are “extremely positive”, though he is waiting for the UK government to approve certain measures before the final investment decision can be taken.

“What I want to say for Ellesmere port is that so far things are moving in the right direction, but we cannot conclude until we have the approvals from the relevant administrations who actually have the power to say yes or no,” he said.

“We are now expecting that a certain number of approvals will be given by the UK administration.”