When Swiss watchmaker Hublot appointed self-made social media celebrity Chiara Ferragni as a face of the brand last year, it underscored the role female influencers increasingly play in selling its pieces to women.

This mission, arguably, is harder for brands that, like Hublot, have thrived on pronounced alpha male aesthetics. But winning over women is crucial for watchmakers.

Not only is the female market an essential engine for growth but it is also an increasingly strategic audience to protect the company’s core, male-focused business.

“Ambassadors are incredibly important because they act as a bridge between product and potential customers, making it easier for people to identify themselves with a brand,” says Ricardo Guadalupe, Hublot chief executive.

Ever since the Big Bang Broderie model won the Ladies’ Watch Prize at the 2015 Grand Prix d’Horlogerie de Genève, women have been a growing focus for the brand. By 2017, 25 per cent of its sales were to female customers, thanks partly to ad hoc designs and partnerships with the likes of Northern Irish Michelin-starred chef Clare Smyth and Spanish footballer Alexia Putellas.

Although their contracts vary in value from five figures to seven, the brand ambassadors are all offered at least one watch for everyday wear.

“Including more female influencers is one way to try and change the often patriarchal and male-focused messaging,” says Sarah Willersdorf, global head of luxury at Boston Consulting Group. She considers the move to be logical as watchmakers acknowledge women’s increasing spending power.

Zenith chief executive Julien Tornare compares the evolution in watch marketing to the car industry a few years ago when female-specific designs were ditched and women became part of the advertising message as a means to influence men. “When you buy watches today, women influence men and men influence women; couples share the watch they wear,” he says.

Influencers have played a big role in Zenith’s growth, with women now making up about 25 per cent of its customers, up from 15 per cent five years ago, according to the company. In 2020, Zenith started its DreamHers campaign to promote independent and inspirational women, alongside its new Defy Midnight model which, with a 36mm dial, fits snugly on women’s wrists.

“DreamHers are women achieving incredible things in their fields, such as chef Amandine Chaignot and ballerina Precious Adams,” says Tornare.

The potential of influencers to boost brands is particularly evident in Asia. “When you are entering a huge, complex market such as China, the more ammunition you have, the better,” says Jean-Marc Pontroué, chief executive of Panerai.

The watchmaker has signed a partnership with Chinese actress Dilraba, who is the brand’s first female ambassador and has more than 75mn followers on Weibo, one of China’s biggest social media platforms. “The partnership with Dilraba has undoubtedly sped up brand awareness among women,” says Pontroué.

Panerai’s oversized mechanical watches were first conceived for the Italian navy. But, with no diamonds in sight, the brand has trailed competitors in the women’s arena. Pontroué is confident, however, that by tweaking the dial size to 38mm and partnering with influencers, it can close the gap.

“Influencers are a strong pillar for the long term, but our identity is key,” he says. “We remain a 100 per cent mechanical brand and we will not have any diamonds.”

Women make up 14 per cent of Panerai’s customers. But, since 2016, the company’s female market in China has grown 60 per cent, it says, with the fastest rise coming since Dilraba’s appointment in the second half of last year.

Influencers can be useful, as women trust women and they represent a certain lifestyle with no right or wrong

Panerai’s strategy could also strengthen its core business, according to Olivier Billon, founder and chief executive of Ykone, an influencer marketing agency. “Reaching women and developing that side of the business, while tapping the prescription power they have on men in their lives, reinforces the core business,” he says.

“It is not news that people listen more to friends than advertising,” says Olivia Crouan, chief brand officer at Audemars Piguet, one of the world’s largest privately owned independent watchmakers. With its muscular designs aimed at men, Audemars Piguet appointed Crouan to balance the scales.

Partnering with influencers such as fiftysomething personal trainer Grece Ghanem is, according to Crouan, just the visible facade of a deeper shift in mindset at the company, which has increased the number of women in key positions and brought in a more varied product offering.

“I want women to see us and see what we can propose, as we have a lot of options for them,” says Crouan. “Influencers can be useful in this, as women trust women and they represent a certain lifestyle with no right or wrong.” 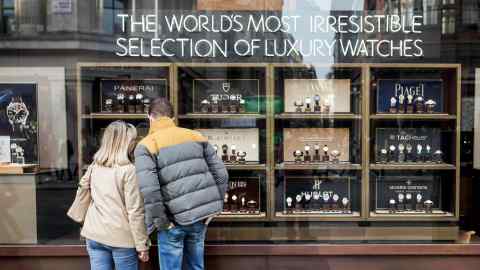 In an effort to woo the digital natives of Gen Z, Swiss watchmaker Maurice Lacroix has initiated partnerships with young personalities such as 24-year-old longboard skateboarding world champion, Marina Correia.

“We have supported all our new ladies’ launches each time with the portrait of one of our ambassadors,” says managing director Stéphane Waser. “We have also increased the marketing activities for ladies’ collections with dedicated content.”

This strategy has enabled Maurice Lacroix to make strides into women’s watches, which now account for about 40 per cent of its sales, up from 7 per cent five years ago, it says.

Addressing women through influencers can make watch brands more approachable, too, boosting brands’ inclusivity and diversity credentials. As Zenith’s Tornare puts it: “If we don’t want to end up in museums, we need to keep up with changes in society.”