Kuaishou, a popular Chinese short video platform, seems a world away from geopolitics. It shows items such as a grandmother singing Hey Jude with her Chihuahua, migrant workers dancing at construction sites and farmers making pork dumplings.

But the company’s initial public offering in Hong Kong this week — which is set to be the world’s largest since the start of the coronavirus pandemic — reveals a basic truth about the US’s strategic rivalry with China: when it comes to making money, there is much more that attracts than repels.

US institutional investors, including Fidelity and BlackRock, feature prominently among investors in Kuaishou’s IPO, which is expected to raise up to $6.3bn. Their interest is just one of many indications that former US president Donald Trump’s exhortation for “a complete decoupling from China” is falling short.

“Instead of decoupling financially, the US and China now have one of the largest and fastest-growing bilateral investment relationships in the world,” said Nicholas Borst at Seafarer Capital Partners, an investment adviser.

“Despite a concerted effort by the Trump administration to reduce investment in China, holdings of Chinese securities by US investors have skyrocketed over the past several years,” Mr Borst added.

Data from the Rhodium Group, a research company, show that investment ties between the US and China are much deeper than official statistics suggest. American investors held $1.1tn in equity issued by Chinese companies at the end of 2020 — or about five times more than the $211bn captured by official US data as of September 2020, according to Rhodium Group estimates.

Much of the discrepancy between Rhodium’s estimates and the official US data derives from the fact that many of the Chinese companies that issue shares on US exchanges are domiciled in offshore tax havens such as the Cayman Islands. The practice is so prevalent that the Caymans has vaulted to the top among overseas destinations for US investors, outstripping the UK, Japan, Canada and other countries.

“Trump administration policies have injected greater risk into US-China financial flows but they have clearly not curbed market appetite for greater financial integration,” said Thilo Hanemann, a partner at Rhodium.

In 2020, US investors’ appetite for Chinese equities was particularly strong. Chinese companies raised $19bn in primary and secondary offerings on US exchanges last year, a total eclipsed only in 2014 thanks to Alibaba’s mammoth $25bn IPO in New York.

The Trump administration did take several steps that may yet have a considerable impact on US investment flows into Chinese equities.

It put dozens of Chinese companies on blacklists that ban investments or make it harder to export technology to them. In addition, US lawmakers at the end of 2020 passed the Holding Foreign Companies Accountable Act, which would force delistings of Chinese companies that are unwilling to meet stricter auditing compliance requirements.

In November, Mr Trump issued an executive order that barred Americans from investing in Chinese companies on a Pentagon blacklist of groups that could be linked to the Chinese military. This included US-listed state-owned telecoms groups China Unicom, China Telecom and China Mobile.

However, Joe Biden has delayed the implementation of that ban until May 27 as his new administration starts reviewing actions taken by his predecessor. It remains uncertain how hawkish Mr Biden will be towards China.

Xi Jinping, China’s president, has shown signs of nervousness. He warned in a speech this month that any tendency by countries to “build small circles, or . . . wilfully impose decoupling, supply disruption or sanctions . . . will only push the world into division and even confrontation”.

Martin Wolf
Containing China is not a feasible option 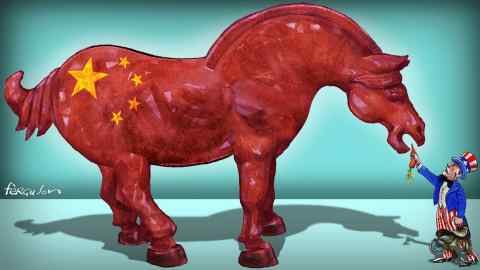 “Beijing is indeed concerned about decoupling or the perception of decoupling that both China and the US have advocated in their respective policies,” said Yu Jie, senior research fellow at Chatham House, a think-tank.

She added that China’s recent signing of the Comprehensive Agreement on Investment with the EU and the Regional Comprehensive Economic Partnership trade deal with mainly Asian countries was a sign that Beijing wishes to ensure that inflows of foreign direct investment continue.

The importance of FDI to China was emphasised by its performance last year, when it attracted $163bn in inflows and eclipsed the $134bn attracted by the pandemic-hit US to become the world’s largest recipient of foreign inflows for the first time.

Such numbers underline the fact that even as Beijing’s rhetoric towards the west, and especially the US, has turned more critical, the numbers point in the opposite direction. The capitalist imperative to chase returns appears, for now at least, to be at odds with growing wariness between the superpowers.