Feminists adjust to the age of Trump

As ‘identity politics’ is forced on to the defensive, advocates for women’s rights are finding new ways to make their voices heard

When Hillary Clinton lost the US presidential election to a man who talked proudly of pussy-grabbing and said women should be “punished” for having abortions, it was more than a blow. For millions of women, in the US and far beyond, it seemed to mark an abrupt end to the dream of a world in which women get to run things, too; a world in which the structures of workplaces and political and judicial systems, set up by men for men, might be made more equal. All that had evaporated. The backlash was on.

The narrative was that liberals, feminists and minorities had brought defeat on themselves, that the obsession with “identity politics” was to blame and that the focus had to be on helping the left-behind white working class. Donald Trump, meanwhile, surrounded by other white men, began removing reproductive rights and the rights of minorities and vulnerable groups. In the UK, deep cuts to state benefits and local services are affecting women, children and the elderly disproportionately. Brexit looms, and with it the threat to EU-mandated equality and employment rights.

For many feminists, the instinctive response to grim reality is to hide, and certainly to get off social media. Yet the upheaval has also generated a new dynamism — one that is reflected not only in activist responses such as January’s Women’s March but also in a wave of books that seek to reckon with how women can deal with this unfavourable world. These include two collections by essayists — a revived, reviving genre. One is by the established American writer Rebecca Solnit, who inspired the how-did-we-live-without-it term “mansplaining”; and one comes from the younger British activist, Laurie Penny. The latter is a polemicist — and her book is a largely data-free stream of consciousness — but she writes with verve and humour. It is a blast, in all senses.

Penny nails a truth early on in her arrestingly titled Bitch Doctrine (she starts as she means to go on): “I understand that a great many people are aggrieved that women, migrants and people of colour no longer seem to know their proper place. I understand that a great many otherwise decent human beings believe that more rights for black, brown and female people means fewer rights for ‘ordinary people’, by which they mean white people. But just because you’re angry doesn’t mean you’re right.”

Penny articulates the problem that has faced everyone who seeks change. It goes back to the first days of the anti-slavery, suffrage, civil rights and gay liberation movements. The oppressed refused to stay in their “proper place”. They want those who have the privilege of power to share the space — and in the 21st-century western world that means governing space, desk space in the top jobs, space in our newspaper columns — with those whose voices have usually gone unheard. But more jobs and influence for some people means less for others. Inclusion comes at a cost. And nobody likes losing out, least of all those who are used to winning.

The problem for individuals is that confronting resistance to change is exhausting and isolating, at even the most basic level, while many brave people who speak out in public are subject to appalling abuse, including threats of rape and murder. Penny describes the tactics of the troll armies that abuse liberals as “words of war”. Penny is a prominent Twitter user and writes movingly and eloquently of the hate speech she has suffered for years: “When those of us who were targeted spoke out, we were told that the abuse was not real . . . That we should laugh it off and get off the Internet . . . Be quieter. Behave.” The abuse of women via social media is something that the tech companies, and wider society, has yet to get to grips with.

Penny is a public figure and Bitch Doctrine reflects that experience. In contrast The H-Spot: The Feminist Pursuit of Happiness, by the New York Times journalist Jill Filipovic, provides a practical, carefully researched modern-life primer for everywoman. Through chapters about motherhood, friendship, sex, work and relationships, she uses her own experience and that of others to navigate the structural problems facing women in a patriarchal society — and to explain how they can be happier. “That means countering regressive political forces with our own moral vision of a great society — one that is structured around women and what brings us satisfaction.” Her thesis is that if women flourish — and have meaningful family lives, work that pays a living wage and freedom from fear of intimidation and domestic violence — it will increase the life dividends, and prosperity, for everyone.

In moments of gloom, feminists and allies might celebrate how far we have come, in a very short space of time, thanks to the activists who came before us. In her chapter on marriage, for example, Filipovic acknowledges that the kinds of marriages she and her (well-educated thirtysomething) peers would contemplate are “worlds apart” from those of even a generation ago. “One of the more profound shifts saw the status of married women transformed from men’s chattel into individuals in their own right. But we’ve seen social and cultural shifts, too. In the 1950s, intelligence didn’t even crack the top 10 qualities American men said they wanted in a wife (it was ranked 11th, tied with education). More important than intelligence were a woman’s cooking abilities, her housekeeping skills, and her pleasing disposition.”

By 1996 (just before my own wedding) intelligence was up to number five. Now it’s the number one quality that men look for. It’s slightly depressing that such a survey exists, but women are realists. We take our advances where we find them.

One of the keys to thriving in a suddenly oppressive world may be friendships. As Filipovic says, “platonic relationships between women have long been forces for creativity, adventure, love, and sometimes jealousy”. But much of the pleasure is relatively recent, given that for centuries women had to segue from childhood into early marriage and motherhood. Now things are different — and it’s perhaps in those friendships, and in collective experiences such as the Women’s March, that women can use often-toxic social media as an “internet for good” to reach out, organise, meet, resist. There’s a retro feel to this mainstream rabble-rousing, a whiff of a return to the 1970s and the consciousness-raising groups in each other’s homes that hoisted aloft the women’s liberation movement.

The internet also offers new ways of exploring female friendships — something Filipovic cites through the hit podcast Call Your Girlfriend. The hosts live on opposite US coasts, so call each other and talk — and in that riffing coined the now-famous Shine Theory, that “surrounding yourself with intelligent, successful women you admire makes you all the better and pushes back on the idea that there are only so many seats at the table for women”.

By amplifying and sharing interests, concerns and successes, everyone benefits. As a medium, podcasts allow intimacy but on a grand scale, and often through live events: at a recent recording of The Guilty Feminist podcast that I attended the theme was “intrepid women” and some of the audience came dressed as suffragettes, as Pussy Riot, as Cleopatra. We all ended on our feet, singing “I Will Survive”.

It is vital to celebrate the optimistic gathering together in everyday life — the workplaces, the social events, the (yes) “safe spaces” where women talk and listen. Rebecca Solnit, however, goes beyond this, reminding the reader of the urgency and importance to feminism of listening to the voices of those who have been forcibly silenced. She quotes the black writer, poet and activist Audre Lorde: “What I most regretted were my silences . . . And there are so many silences to be broken”.

The essays in Solnit’s latest collection, The Mother of All Questions, range widely — from the titular piece on society’s obsession with women and motherhood to literature (“Men Explain Lolita to Me”) and an analysis of the 1956 film Giant that will have you running to the sofa to watch it. She always, though, comes back to silence, defined in “A Short History of Silence” as “silence as what is imposed and quiet as what is sought”.

Over centuries, women’s testimony has been ignored, dismissed and disbelieved. “So much of feminism has been women speaking up about hitherto unacknowledged experiences, and so much of antifeminism has been men telling them these things don’t happen. ‘You were not just raped,’ your rapist may say, and then if you persist there may be death threats . . . Non-white people get much the same rubbish about how there isn’t racism and they don’t get treated differently and race doesn’t affect any of us, because who knows better than white people who are trying to silence people of colour? And queer people too.”

What Solnit is asking is for us to pay attention to what others say, “the foundational act of empathy, of listening, of seeing, of imagining experiences other than one’s own”. Reading this book finally gave me the key to understanding what happened in recent years that allowed the scale of sexual abuse — by celebrities such as the British TV personality Jimmy Savile, by senior figures in the Christian churches and public schools, and by sex gangs that preyed for years on vulnerable girls in English cities, whose testimony was dismissed by police — finally to come to light. “Silence is what allowed predators to rampage through the decades, unchecked. It’s as though the voices of these prominent public men devoured the voices of others into nothingness.”

Now things have changed — somewhat. The women who accused powerful men at Fox News of sexual harassment were denigrated — but the women’s testimonies were heard, and believed. “If the right to speak, if having credibility, if being heard is a kind of wealth, that wealth is now being redistributed,” Solnit offers, in what is ultimately a hopeful outlook.

Listening, talking, conversations between friends — these are the small things to treasure, and which may be transformative when women and their allies amplify each other’s voices. This is succinctly articulated in a beautifully produced book from the celebrated Nigerian novelist Chimamanda Ngozi Adichie. Dear Ijeawele: Or a Feminist Manifesto in Fifteen Suggestions is a letter to a friend who has just had a daughter, Chizalum.

It’s personal: “a map of sorts for my own feminist thinking”, Adichie writes. It’s political: “Teach her to question our culture’s selective use of biology as ‘reasons’ for social norms.” And it is, as Adichie’s fans might expect, written with skill and candour. “We have a world full of women who are unable to exhale fully because they have for so long been conditioned to fold themselves into shapes to make themselves likeable. So instead of teaching Chizalum to be likeable, teach her to be honest. And kind.” We could all do with a bit more kindness in the world at the moment.

The Mother of All Questions, by Rebecca Solnit, Haymarket, RRP$14.95, 192 pages (Published in the UK by Granta in September)

The writer is the FT’s assistant features editor for Comment

Even your photo relegated women to second place / From Susan Harvey 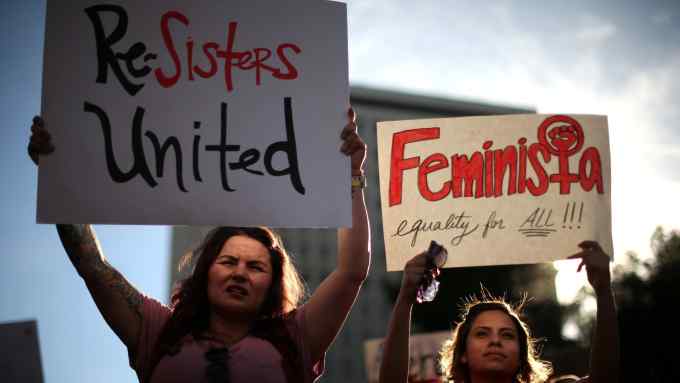