As political clamour and determination to cut carbon emissions grows, so too has excitement around the prospects of game-changing technologies that can accelerate the process.

From clean hydrogen to carbon capture and storage there is a rising cacophony around the potential of “silver bullet” solutions to climate change.

But there is a hitch: both of these technologies remain too expensive and neither has yet been successfully deployed at scale. Experts say a focus on futuristic solutions distracts from the ability of the energy sector to significantly decarbonise power production by using readily available technology and ramping up the deployment of renewables.

“I don't think we need to wait — and I don't think we can wait — for a silver bullet,” says Faustine Delasalle, director of the Energy Transitions Commission, a research body backed by the World Economic Forum. “To some extent, the silver bullet that we needed, we already have — and it’s renewables.”

The costs of wind and solar power generation have fallen by 90 per cent and 60 per cent, respectively, over the past decade, according to the ETC. That makes them competitive in price with fossil fuels.

This is really the low hanging fruit that doesn't require any major technology breakthrough. It's less sexy but it's available.

In order to reach net-zero emissions by 2050, the first priority should be the mass scale-up of renewable power, according to the ETC, by cranking up the rate of installations globally by a factor of five to six compared with 2019 levels, and retrofitting homes and businesses to stop energy being wasted.

“This is really the low hanging fruit that doesn't require any major technology breakthrough,” says Ms Delasalle. “It's less sexy but it's available and it's cost-competitive.”

Solid returns also make renewable infrastructure a more attractive bet for most investors than the likes of hydrogen and CCS and other promising technologies even further behind in the queue like small scale nuclear, tidal power and direct air capture of carbon dioxide. $311bn was pumped into renewable power in 2019, according to the International Energy Agency, approaching the $480bn spent on upstream oil and gas. 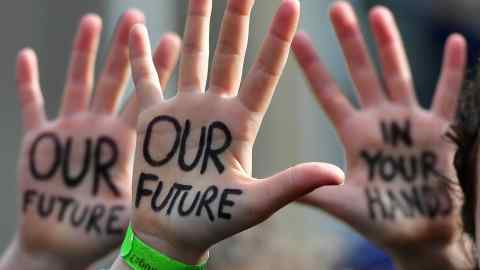 “The vast majority of the actual dollars are going to the things that may be less topical to talk about these days, which continues to be the construction of generation and transmission infrastructure — wind, solar, biomass, et cetera,” says Alfredo Marti, a partner at Riverstone Holdings who oversees a private equity portfolio of over $4bn in the renewables sector.

“It also makes sense because that is where the vast majority of the volume of dollars is required.”

Yet as countries become more reliant on renewables, the question of intermittency becomes more pertinent: the sun does not always shine and the wind does not always blow. In order to balance out the grid, carbon capture technology — which aims to stop CO2 entering the atmosphere — could be used to keeping gas-fired power operational without the ensuing emissions.

Moreover, even massively expanding electricity usage would still only cover about two-thirds of final energy demand. To reach net-zero across the board requires addressing other sectors. Fuel cells powered by green or renewable hydrogen could be used in place of combustion engines, allowing heavy vehicles, ships and even planes to shift away from oil-based fuel without relying directly on grid-supplied electricity.

“In order to reduce emissions in line with Paris Agreement targets we need to decarbonise other big-emitting sectors of the economy,” says Ashim Paun, global co-head of ESG research at HSBC. “And this means that we need to look at other alternatives other than just clean power generation.”

But that will require pushing down the costs of these new technologies and boosting supply — something that will need state support — much like what happened with wind and solar in recent decades.

The EU has laid out plans to ramp up green hydrogen capacity to 40GW by 2030 — a hugely ambitious increase from the bloc’s current sub-1GW levels. Joe Biden, the Democratic contender for the US presidency, has said he would pump money into carbon capture research and development and increase tax incentives. But more is required from policymakers, experts say.

“While the challenges facing the commercial deployment of green hydrogen and CCUS are daunting, both must be part of the solution if the world is to achieve the Paris goal for global warming,” says David Brown, an analyst at Wood Mackenzie. “To play that role, the technologies will require sustained policy support.”

He adds: “If world leaders want to maintain any credibility in pledging commitment to the Paris goals, they will need to do more to show how they intend to achieve them.”