Brexit: How long would Britain take to leave?

Process could be delayed by Tory leadership contest and EU negotiations

George Parker in London and Alex Barker in Brussels

The tightening of the opinion polls in recent days has prompted a renewed focus on what exactly Britain can expect if it votes to leave the EU. Contingency planning in the City is intensifying.

Peter Kellner of YouGov, the pollsters, said: “If history is any guide, then Remain is still heading for victory on June 23. Past referendums have tended to produce a late move to the status quo.”

But what if the country does vote for Brexit? How long would it take for Britain to end its 43-year membership of the European club. What would “out” look like?

David Cameron says he would not resign if he loses the referendum, but many Tory MPs do not believe him. In any event, power in the cabinet would immediately shift to the victorious Brexiteers.

Mr Cameron has said he would swiftly invoke Article 50 of the EU’s Lisbon Treaty to begin exit negotiations, but Michael Gove, the pro-Brexit justice secretary, says “no responsible government” would act so hastily.

A more likely scenario is that Britain’s EU membership is put on ice while the Conservatives first decide who should replace Mr Cameron as prime minister, with the task of suing for divorce.

Ken Clarke, the former Tory chancellor, predicts that Mr Cameron “would not last 30 seconds” if he lost the referendum, but appointing his successor would take a little longer.

Conservative MPs narrow the field of potential candidates to two, a process which could be concluded before the summer break. But the final choice is made through a postal ballot of the wider membership of the party. That could drag into the autumn. 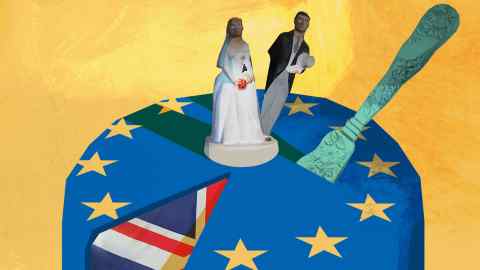 The contest could see Eurosceptic candidates, including former London mayor Boris Johnson, vying for votes by promising to take immediate action to curb the powers of Brussels, even before formal exit talks start.

Mr Gove wrote in a pamphlet for the communications firm Portland that the break-up would be a process of “evolution not revolution”.

“The British people will simply have given their instruction to the government to make arrangements for us to leave the EU,” he said. “It will be in Britain’s hands how we manage it and how long it takes.”

He wants to delay invoking Article 50, which sets the clock ticking on a final break two years later — unless all the other 27 member states agree to an extension of negotiations.

Mr Gove admitted at the weekend he could envisage Britain still being an EU member in 2020: “Well, we wouldn’t have left the EU by the end of this parliament,” he said. A spokesman later claimed he had misspoken.

How would that work in practice ?

Under Mr Gove’s plan, Britain would retain all the advantages of EU membership while it carried out negotiations on a new sort of relationship, including a trade deal. Formal Article 50 talks would come later.

A Eurosceptic Tory prime minister may not be the master of this renegotiation; there is a strong pro-EU majority in the House of Commons and some MPs may demand that any exit deal ensures that Britain retains access to the single market, even if that means retaining free movement.

But those who will be closely involved in the divorce negotiation in Brussels doubt either side will have a political incentive to commit to a long transition period, during which time Britain will be halfway out of the exit door.

“I do not think this will be acceptable in Britain. People will want the out vote to be honoured,” said one. “We will have a hostile situation. You have somebody who does not want to work with us any more.”

Could a newly-appointed Eurosceptic British prime minister really continue to apply all EU rules — including the free movement of workers and the payment of £8-9bn a year to Brussels — while technical talks took place?

What would happen in the meantime?

Mr Gove has proposed some immediate action — for example amending the 1972 European Communities Act to restrict the influence of the European Court of Justice — while still inside the EU.

But Sir Andrew Cahn, a former head of UK Trade and Investment, said: “Acting unilaterally would throw the law of the land into uncertainty, and risk a tit-for-tat response from others. It could be a slippery slope to real chaos.”

Officials on both sides are braced for a messy, acrimonious process. Apart from making budget contributions, Britain would also be expected to abide by EU rules until it left the bloc, even though its influence in shaping them would be virtually zero.

This could include hostile financial regulation intended to pave the way to a post-Brexit era. Should relations turn hostile, both sides could gum up the workings of the EU. This could range from research grants and competition decisions to the standing of Brits within the EU.

For instance Britain’s Jonathan Hill, the EU commissioner in charge of EU financial regulation, would likely be stripped of that role within months of the Brexit vote.

If Britain is still a member in 2020, then Britain’s future EU relationship would become a central issue at the next general election. But it is hard to see how Labour — or any other party — could seek to reverse a Brexit vote without incurring the wrath of voters. Or without another referendum.

The view from Brussels

For the EU officials looking at how to cope with a British vote to leave the bloc, one big gap in contingency plans looms large: what will the British want?, writes Alex Barker.

While the Brussels machine has worked through the legal options for a divorce and trade settlement with Britain, there is increasing bewilderment over when talks will start, who they negotiate with and what exactly they will be asked to concede.

“It is extremely difficult,” said one senior EU diplomat closely involved in the planning. “If you work on a Plan B you quickly realise that you need a C, D, E, F and G as well. We just can’t predict the politics.”

Another senior EU parliamentarian said: “There are two sides to a negotiation. London will need to give some answers. Nobody knows who will negotiate, if there will be a change of leadership, how long it will take and what the government will actually want.”

There are two main streams to the post-Brexit work relating to the UK, both of which largely turn on what the UK actually demands. The first concerns the divorce: how Britain leaves the club and settles financial bills and legal obligations, managed under Article 50 of the EU treaty. This is primarily about untangling past agreements.

The second separate strand regards future terms of trade between the EU and Britain. This is more like a traditional EU trade deal, requiring unanimous agreement between all 27 EU member states and an onerous ratification process.

Although Brexit supporters may see merit in it, for the EU there is little interest in linking the divorce and post-divorce settlements.

Trade deals typically take longer and the EU’s bargaining power to set trade terms with Britain will only increase once it is outside the club.

Countries such as France, Belgium and Luxembourg also have little patience with the idea of a long transition while Britain has one foot out of the union.

The mix of incentives — particularly the need to show that leaving the bloc carries a heavy price — has convinced some senior EU negotiators that it would be very difficult to manage a smooth exit. “This will be disruptive,” said one senior EU official. “It is hard to see a way around it.”

Get alerts on Michael Gove when a new story is published