We’ll send you a myFT Daily Digest email rounding up the latest Theatre news every morning.

Ever fancied yourself as a spy? Ella Hickson’s ingenious cold war thriller not only tells a slippery story of trust and betrayal in 1968 East Germany, it invites you to play along. We’re not the 007, fast-car-driving, cocktail-sipping type of spook, however; we’re more akin to the guys in the van, crouched over the surveillance equipment, listening in for the tiny tics that will incriminate or exonerate. It’s fun, smart — and very unsettling.

Every audience member has a set of headphones — the only way to access the drama in Anna’s East Berlin flat as it unfolds on stage behind a glass screen (at the National’s Dorfman). Moreover, we only hear what Anna (Phoebe Fox) is hearing. Binaural microphones fixed in Fox’s ears mean that we eavesdrop on her every moment — the whispered conversations, the phone calls, the trip to the bathroom — all scrupulously caught in the sophisticated sound-design by Ben and Max Ringham. Some conversations on stage come across clear as crystal, others are just out of range.

It’s a technique that neatly ties up form with content: the innocent instinct of drama to peer into characters’ lives and to listen out for revelations becomes entangled with a world in which private citizens could be sucked into espionage. We feel implicated, voyeuristic and uncomfortable as we pry into Anna’s most intimate moments — but also riveted as the tense story unfolds onstage.

Fox’s Anna, meanwhile, is wired in more senses than one. Her husband, Hans, has just been promoted at work and the couple are hosting a celebratory party for his colleagues. But a neighbour’s husband has disappeared and Hans’s new boss, when he arrives, brings Anna’s brutal wartime past crashing into the room. The plot twists and turns as fiendishly as a headphone cable in your bag and few people on stage are quite what they seem.

In its sweaty intensity and uncertainty, it’s a play that plugs into a time of ideological divides, idealistic uprisings and split loyalties: it’s no accident, perhaps, that Anna’s name is a palindrome that can be sliced down the middle and read in either direction. At an hour long, though, it’s a little overloaded and occasionally clunky, while the supporting characters don’t have much scope or definition.

But it’s also gripping: subtly directed by Natalie Abrahami and designed by Vicki Mortimer to create a constant creepy uncertainty punctuated by sudden scary plot developments. Fox’s nervy, volatile Anna is excellent, as is Max Bennett as the sinister boss Christian and Paul Bazely as Hans, desperately trying to keep up appearances as his wife begins to unravel.

It’s a piece that builds on work done by Sound & Fury on the importance of listening and on immersive theatre’s interest in audience participation. In Anna, the audience is together, yet separate; communal, yet private. And by making technology so integral a part of the story and the way we absorb it, the show subtly opens up the cracks between what we see and what we hear, reminding us that our perspective is partial. Most significantly of all, it reflects back on our own age of deep divisions, misinformation, digital footprints and smart devices. 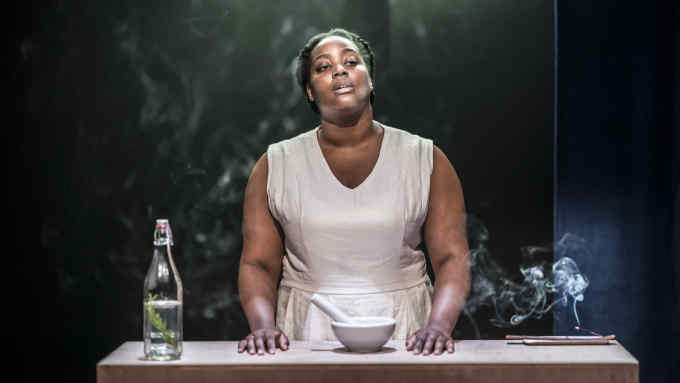