Trump faces ‘alternative facts’ from Putin in the Middle East

After six years of war in Syria, Russia and Turkey have brought government and rebels together in Kazakhstan, face-to-face for the first time, but at opposite sides of the same room glaring at each other. These talks in Astana are most unlikely to bring peace to Syria — but they will probably cement realignment, leaving the US substantially out of the regional picture from the Levant to Libya.

True, unlike at previous talks in Geneva, convened by the US and Russia under UN auspices, there are mainstream rebel fighters at the table rather than the five-star hotel rebels who have so signally failed to build a cohesive opposition and alternative government. Moscow’s ally in Syria, Iran, is minding the government delegation, while Turkey — until now set on toppling the regime of Bashar al-Assad — is supposed to be prompting the rebels. Everyone notionally agrees Astana is a bridge to resumed UN-run talks in Geneva next month; it could just as easily be a bypass. Either way, this is a diplomatic dance orchestrated in all its essentials by the Kremlin.

President Donald Trump and his team talk about what they are pleased to call “alternative facts”. The master of the Kremlin he so admires, President Vladimir Putin, is busy with his friends creating alternative facts across the Middle East.

“Putin intends to start the post-Obama chapter in Syria on his terms, confronting the new American administration with the fait accompli of [Assad] regime victory in Aleppo,” writes Fabrice Balanche of the Washington Institute for Near East Policy. “On the diplomatic front, the new Turkey-Russia-Iran alliance threatens to marginalise other outside actors.”

It was Nato ally Turkey’s tilt towards Russia and Iran, the architects of the Assad regime’s victory in retaking rebel-held eastern Aleppo, that changed the strategic equation in Syria. The U-turn by President Recep Tayyip Erdogan followed nearly a year of estrangement from Mr Putin, which came close to war after Turkey shot down a Russian warplane near its border in November 2015.

Ankara and Moscow made up after the failed military coup in Turkey in July, in time for Turkish forces to thrust into north-west Syria, clearing Isis jihadis from almost 100km of its porous border. But Turkey needed Russia’s blessing to pursue its real aim: stopping Syrian Kurdish fighters, allied with the US against Isis, from moving westwards across the river Euphrates to join up their eastern and western territories.

Now, even though Ankara is purveying “alternative facts” to disguise its shift on Syria, Turkey no longer seeks the removal of Mr Assad. “The facts on the ground have changed dramatically,” Mehmet Simsek, Turkey’s deputy prime minister told an audience in Davos last week. “Turkey can no longer insist, you know, on a settlement without Assad,” he said. “It’s not realistic”.

Mr Putin, for whom Syria is arguably about securing Russian superpower parity with the US, has just signed long-term leases with the Assad regime for naval and airbases in Syria. Iran and its militia proxies face an unpredictable but hostile Trump administration. Tehran may be trying to replicate its success with Lebanon’s Hizbollah — the most potent paramilitary organisation in the world — with the militia coalitions it has stitched together in both Iraq and Syria. 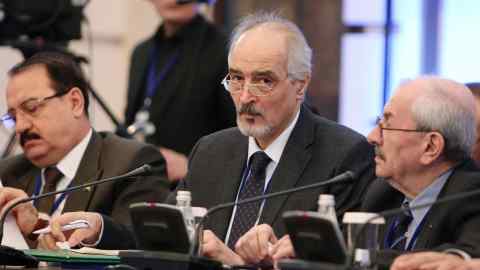 President Trump will have to make decisions about these emerging new facts on the ground. He may want to tilt towards Mr Putin, allying against Isis and Islamist extremism, and hoping Moscow can restrain Tehran’s muscle-flexing across the region. But that would have collateral costs, not least in Europe and within Nato.

For the moment, the US is a bystander to Russia’s “alternative facts” in the Middle East. Moscow is, for instance — along with another traditional US ally, Egypt — shifting support in Libya away from the UN-backed Government of National Accord in Tripoli towards a former Gaddafi general.

Mr Trump’s one ostensible attempt to create alternative facts on the ground in the Middle East — a lurch towards Israel’s irredentist government endorsing more settlement-building on occupied Palestinian land and a pledge to move the US embassy to Jerusalem — would alienate Washington’s Arab allies. In Saudi Arabia, the ruling House of Saud, as custodians of the holy cities of Mecca and Medina, would have to react robustly. Jordan’s Hashemite monarchy, descended from the house of the Prophet Mohammed, who in Muslim belief rose to heaven from Jerusalem’s Dome of the Rock, is guardian of the city’s Islamic holy places, by tradition and by the 1994 treaty with Israel. Any challenge to the religious status quo in the holy city strikes at the heart of Hashemite legitimacy.

These are all facts too, and the Trump administration would be wise to consider them.