Planned IPO will test the value of Uber’s network

With its army of human drivers, the group should be best placed to bring in new tech
Richard Waters

Amazon, which came to the stock market in 1997, was widely thought to be on the verge of bankruptcy after the dotcom bust. Fifteen years later, Facebook arrived on Wall Street as a shift to smartphones threatened to leave it behind — slicing 50 per cent from its share price before the company proved it could make money from mobile.

Yet the challenges currently facing Uber are something else entirely. The company’s advisers are warming up for an IPO valuing the ride-hailing company at more than $100bn. If this confidence is justified, it would underline Uber’s recovery from recent troubles and cement its position as the defining tech start-up of its generation. But that is a big “if”.

It is not just the questions that still hang over Uber’s basic business model. Uber, like its rivals, has built a new market through the liberal use of subsidies, racking up huge losses in the process. What demand will look like when pricing adjusts to an economic level is not clear.

Nor is it simply the uncertainty of operating a disruptive company in a highly regulated sector. Transportation is not like social networking, where start-ups have largely been free to screw up society — at least, until politicians can no longer ignore the consequences. The cities where ride-hailing services ply their trade tend to be more interventionist.

In some cases, the interests of transportation start-ups run directly counter to the interests of host cities. Uber, for instance, benefits from having many empty cars patrolling the streets, meaning riders never wait long. But San Francisco’s county transport authority said this week that half of the recent build-up in local traffic congestion was down to services such as Uber and Lyft.

And questions remain about the future of Uber’s business. Will it be a transportation supermarket — offering everything from electric scooters and bikes to food delivery and logistics — as well as a vertically integrated tech company, with its own self-driving technology? Or will it spin out certain businesses into separate entities, something that is already under consideration? Taking on everything might be too much for any company.

All of these issues, however, pale in comparison to the single, over-arching question: what is the value of Uber’s network?

In the early days, it was easy to imagine that Uber operated in a “winner-takes-all” market. The company with the most drivers on its network would attract the most users. That would lead drivers to accept lower fares, because they would spend more time working and less time sitting idle. The result would be a virtuous cycle that attracted more riders and drivers.

But that does not seem to have happened. Riders and drivers both like choice, and are capable of juggling multiple apps. US rival Lyft shows no sign of going away, and is planning an IPO of its own. In what is essentially a city-by-city market, competitors may not need to match Uber’s scale to be viable. 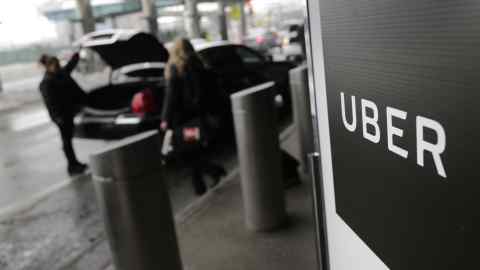 Yet whatever network effects Uber is able to generate could bring enormous benefits further down the road — particularly when the era of driverless cars finally arrives.

Autonomous vehicles have trouble in unpredictable environments, and at first, they are likely to operate only on limited, simplified routes, and under perfect weather conditions. That period could last for years.

A network such as Uber, with an army of human drivers, should be best placed to bring a new technology like this to market. It could release driverless cars on to the road as and when conditions are right, and only on the least complicated routes. As their capabilities increase, the cars could take on a progressively larger share of rides. If it played out this way, ride-hailing companies could be at the front of the driverless car revolution — whether or not they developed the technology themselves.

But will true robot taxis hit the roads in the next five years, or decades from now? Will deep-pocketed companies such as Alphabet — the parent company of Waymo, widely considered to be the most technically advanced — unleash their own fleets of vehicles, leaving Uber behind? Will Tesla, or another carmaker, succeed in turning its customers into owner-operators for a proprietary fleet of autonomous electric cars?

The answers to these questions have a huge bearing on Uber’s ultimate value. Until now, they have only been of concern to a privileged group of private investors. But if things go to plan, soon anyone will get the chance to take a punt.