The new front for green revolution rests on warrior accountants

Thirty years ago, when I was a student at a British university, I presumed that if anyone was going to start an environmental and social revolution, it would be lead by activists wearing tie-dye T-shirts and hippie bracelets — and waving political placards.

After all, back in the 1980s — or the era shaped by free-market ideas of Margaret Thatcher or Ronald Reagan — the people pressing for social change tended to be people with a liberal, anti-establishment bent, and/or students studying social sciences. (Full disclosure: I was a hippy anthropology student myself, and, yes, I frequently wore tie-dye too).

Students, or young professionals who had embraced the Thatcherite dream were too busy polishing their resumes and trying to win jobs at management consultancies, investment banks or accountancy firms to have time to embrace activists causes — or take part in say a Greenpeace rally, say.

There was, in other words, a quasi-tribal divide: well-meaning liberals and political or green activists seemed to sit in a different camp from hard-headed careerists who wanted to go into business, or handle balance sheets, spreadsheets and computers.

How times change. These days, there are still plenty of liberal dreamers (and anthropologists) who are fighting for social and environmental change. But sparking a revolution is no longer “just” about placards or street protests; chaining yourself to a bulldozer feels as outdated as 1980s shoulder pads.

Instead, the new front for activism revolves around something that anti-establishment hippies used to scorn or ignore — the world of accountancy and finance. Or to put it another way, we are entering an era when balance sheets matter more than protest barricades — and a new breed of activist warrior accountants could be the biggest revolutionaries of all.

To understand this, consider — by way of one example — the Carbon Disclosure Project, or CDP. This project first sprang to life in 2000, when a handful of business entrepreneurs and environmental idealists hit on the idea of tracking carbon emissions.

Initially, the concept seemed bizarrely alien. As Paul Simpson, the chief executive, recently explained in the HuffPost: “we had set out to do something that was practically unheard of in capital markets at the time — ask business to provide climate-related disclosures.” While many businesses initially refused, around 35 institutional investors, managing US$4 trillion in assets, jumped on board in 2002 and urged companies to provide data on their carbon emissions, targets and projected reductions.

The idea slowly snowballed, and these days around 6,300 companies offer this type of corporate statement. So do almost 600 cities and 100 states and regions. “It has been exhilarating to see how the flood of data, which we have helped to drive demand for, is influencing the way investors and asset managers approach low-carbon investment,” says Mr Simpson.

Or, for another example, consider the case of ExxonMobil. Environmental groups have been criticising the carbon footprint of the mighty oil company for many years — mostly with little effect. But a couple of years ago, campaigners prodded the Securities and Exchange to launch an investigation into whether Exxon had mis-stated the possible impact of future environment regulations in corporate reports about the valuation of oil and gas reserves.

As it happens, the Trump-era SEC leaders concluded this two-year investigation earlier this year without finding any evidence of wrongdoing. However, two state attorneys are continuing their own probe. And notwithstanding the eventual SEC ruling, the mere publicity around this case seems to have had some impact: earlier this year Exxon said it was re-evaluating how it measures carbon issues in its corporate accounts.

Other companies are likely to follow suit. That is partly because of the work of groups such as the CDP. But it is also because there is rising pressure for better metrics, as the impact investing sector swells in scale — there are now more than $22tn of funds being managed under an ESG (environmental, social and governance) or CSR (corporate social responsibility) mandate, according to the Global Sustainable Investment Alliance.

So, if I could be transported in a time capsule back to my Thatcher-era, anthropology student self, the message I wish I could give to my student cohort would be this: if you are angry about how the world works, and want to campaign for social change, do not ignore or dismiss the accountants. On the contrary, trying to start a revolution through corporate balance sheets, or the once-dry world of actuarial measurements and disclosure, might be far more effective in the long run than fringe protests.

No, not all accountants and asset managers welcome the idea of “going green” or pushing for social change; nor do all activists want to dance with the C-suite. Professional habits die hard. And nobody should deny that the world of impact investing, “green” corporate disclosures and sustainable accounting is still relatively young, and plagued by some logistical problems.

But it is time to hear cheer for the new breed of activist bean-counters — if nothing else because it might show that tribalism of my student days is dying away. Revolutionaries can come in many forms — sometimes dressed in boring grey suits, instead of tie-dye. 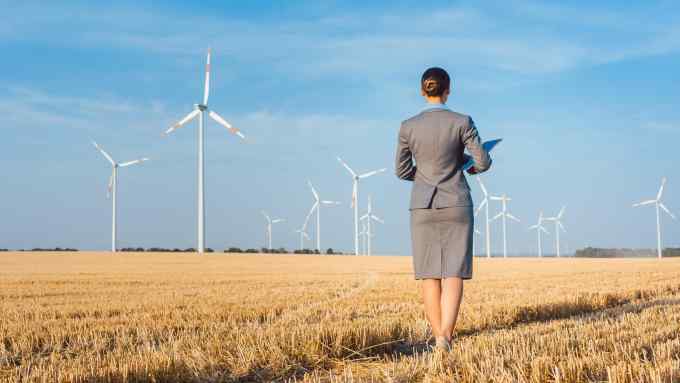