Breastfeeding in Poland: not in public, please

Zuzia Jesionowska, Marta Andreasik and Ania Niziolek all agree they have been lucky. The young mothers have breastfed their babies all over Warsaw without receiving any negative comments. They also realise their experiences are not the rule in Poland. Before Jesionowska became a mother she did not understand why a woman would breastfeed in public. Now, she says, she feeds seven-month-old Mikolaj anywhere. Andreasik has even breastfed her six-month-old, Amelia, in a church. Niziolek’s son, Ignacy, is 21 months old and eats solid food but she still breastfeeds him occasionally. She covers him with a scarf to avoid attention.

In Poland, breastfeeding in public is a controversial topic. Liwia Malkowska made headlines in August when she took her six-month-old daughter to a restaurant in Sopot, a seaside resort on the Baltic. When the infant began to cry she attempted to breastfeed her at the table. Before she had unbuttoned her blouse, a waiter told her to move to the toilets.

In response, Krzysztof Smiszek, head of the Polish Society of Anti-Discrimination Law, is suing the restaurant for discrimination. It is an unprecedented case in Poland and one of very few that have been made across the EU. The society has also filed a request to a Polish judge to direct the question to the European Court of Justice. If the ECJ rules that stopping mothers from breastfeeding in public is discriminatory and thus illegal, it is likely to set a precedent for all EU member states.

Malkowska’s case has triggered a public debate in Poland. According to Institute of Media Monitoring records, public breastfeeding-related content was viewed 20m times and provoked more than 100,000 online interactions in the week after the incident. The majority of comments were in support of Malkowska, but there were also critics, like Marek Migalski, a former MEP, who compared breastfeeding to “farting”.

Smiszek says he has received calls from people angry at what they see as his promotion of “moral laxity”. But, he says, “some people also said [this case] is only the tip of the iceberg and that women are being maltreated in shopping malls, restaurants. We touched an issue that had been swept under the carpet.”

In October, Polish women forced another issue into the limelight. Tens of thousands of them marched on the streets, dressed in black, to protest against a ban on abortions proposed by the ruling conservative Law and Justice (PiS) party. The demonstrations prompted the government to pull back from its plan, at least for now.

deaths of children under five per 1,000 live births

Progress in other areas of childbirth and care has been patchy, says Joanna Pietrusiewicz, head of the Foundation for Childbirth with Dignity, a Polish non-governmental organisation that seeks to protect the rights of pregnant women and mothers. The foundation celebrates its 20th anniversary this year and its experts say that although there has been some progress in increasing the safety of medical procedures during childbirth, it is not enough. “There is another issue: a human approach to perinatal care. Here Poland still has a lot to do,” says Pietrusiewicz. Normalising breastfeeding in public is one of the foundation’s goals. Pietrusiewicz has no explanation for why the debate on the subject is so heated in Poland. “Is it because breastfeeding is very intimate? Or, in a conservative mentality, a woman should sit at home with her baby? Or maybe because it is connected to a physiological act?” she asks. 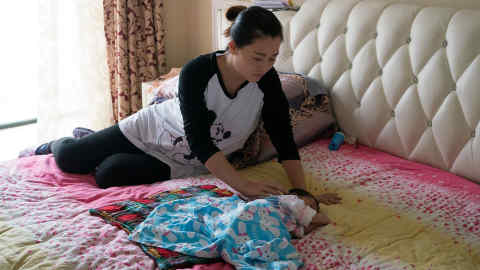 Agata Aleksandrowicz, who writes a popular Polish blog about breastfeeding, thinks that mothers who nurse openly are not socially accepted because there are simply not very many of them: “These women are not visible in public spaces, so breastfeeding becomes a very rare phenomenon, something unwanted,” she says.

The World Health Organisation recommends babies are exclusively breastfed up to six months of age, with continued, complementary breastfeeding for another two years or more. This helps mothers by speeding up their recovery after childbirth, and babies too, as breast milk contains all the essential nutrients for their development. In Poland, any woman who follows these guidelines and is unable to breastfeed openly would find her lifestyle severely restricted.

Almost 99 per cent of Polish mothers want to breastfeed their babies when they leave hospital. But most soon give up — only 14 per cent breastfeed exclusively until their baby is six months old, according to research by Urszula Bernatowicz-Lojko, a neonatologist.

“Whatever issue we look at — breastfeeding in public, the expertise of medical staff, the knowledge of mothers, the advertisement of formula milk — the topic has been neglected and no one has ever done enough to fix it,” says Aleksandrowicz. The problems begin in maternity wards, where every third newborn is fattened with formula, according to a report by the Supreme Audit Office. Producers sell modified milk cheaply, or even give it away, which means babies quickly get used to bottles.

Midwives often do not have up-to-date knowledge on lactation, says Pietrusiewicz. “It is easier to get a formula than good lactation advice from a midwife.” Paediatricians and gynaecologists — the first specialists women see after childbirth — are similarly short on proper advice: 45 per cent of doctors recommend women experiencing problems with lactation to bottle-feed instead of breastfeeding. Only 7 per cent suggest an appointment with a lactation expert, according to a report from Nutropharma, a company that produces Femilakter, a supplement for breastfeeding mothers.

Innovation to Watch
Breastfeeding by mail 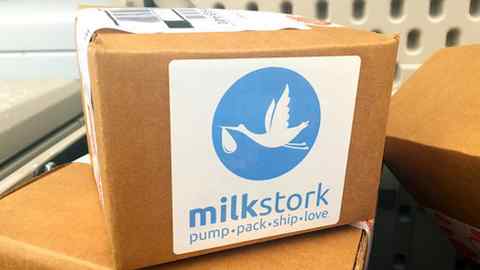 Another problem is the advertising of formulas. Poland has committed to comply with the recommendations of the WHO’s International Code of Marketing of Breast-milk Substitutes, which restricts the marketing of such substitutes to ensure that mothers are not discouraged from breastfeeding. It also includes a ban on product sampling and advertising, but since the code is not binding, Poland has implemented only a few of its recommendations. As a result, formula is advertised in the media next to articles on breastfeeding or healthy nutrition. In shops, processed baby food is available for four-month-old infants. The top hits in a Google search of “breastfeeding” in Poland are links to Pampers nappies and campaigns organised by formula producers Nutricia and Nestlé. In the UK, by comparison, the top two links are to National Health Service webpages on the benefits of early and continued breastfeeding.

Breastfeeding is even more problematic for working mothers. Under the Polish labour code, nursing mothers can take two 30-minute breaks a day to express breastmilk. “We do not know how [that law] is implemented,” says Pietrusiewicz of the Foundation for Childbirth with Dignity. “We get information from women who say they feel embarrassed; they get a sense that breastfeeding is not welcome at their company.”

Workplaces do not usually provide women with private places to nurse — half of women claim no space is made available in which they can express breastmilk. The lack of such facilities, and the negative attitudes of employers and colleagues, force 74 per cent of women to stop breastfeeding prematurely, according to the Nutropharma report.

New initiatives aim to empower women to breastfeed in public. The Land of Milk and Love foundation, for instance, creates comfortable corners for mothers in museums. “A drop bores through rock. In this case, a milk drop,” says Patrycja Soltysik, the head of the foundation, who was herself rebuked while breastfeeding her son in public — an episode that she says spurred her to take action.

Pietrusiewicz says public promotion of breastfeeding is crucial to give mothers knowledge and choice. “We can make 100 per cent of women breastfeed, but that is not what it is all about,” she says. “It is about women being relaxed, calm, happy and able to experience their maternity the way they feel it should be.”