Until this year there was no way to shop on Amazon.com without an international credit or debit card.

The solution, developed by the ecommerce giant and money transfer company Western Union, allows customers to place an order online and then pay in cash at a branch of Western Union. Called PayCode, the service has been rolled out in 20 countries, which range in size from Palau to the US, allowing Amazon to reach new customers and creating a fresh service line for Western Union.

“Lawyers were at the table from start to finish,” says the financial services company’s chief legal officer, Caroline Tsai, about achieving the deal. They had to ensure transactions would comply with financial regulations in each country and create a global model so that it could be expanded further.

There has long been a debate about whether general counsel and in-house lawyers generally are primarily business enablers or guardians. The distinction is between helping a business achieve new commercial objectives and protecting it from taking unacceptable legal, compliance or ethical risks.

The top-ranked in-house legal teams in this year’s FT report on innovative North American lawyers stand out for the roles they played to help their businesses grow, change and pioneer new products and services. In doing so, they have integrated the roles of enabler and protector.

PayPal’s legal team had to build relationships and trust with both US and Chinese authorities to allow the California-based online payments company to buy China’s GoPay amid an escalating trade war between the two countries.

The acquisition makes PayPal the first foreign company with a licence to provide online payment services in China and allows it to offer services to millions of Chinese consumers who want to buy goods overseas. The deal took two years to complete, during which PayPal’s in-house lawyers worked closely with compliance and business development teams to navigate numerous twists and turns involving data privacy, cyber security and licensing.

Louise Pentland joined PayPal in 2015 just after the payments company was spun off from online marketplace operator eBay. The legal team has shifted its focus under her watch: the GoPay deal is just one of many where in-house lawyers have played a leading role on important transactions or strategic projects.

“People talk about legal or human resources as support functions, but I think about us as enabling functions. We enable the business to be successful,” says Ms Pentland. Part of the difference is psychological because it means a shift from thinking in terms of providing support or a service to having a direct stake in creating new value for the business.

General Motors’ legal team are central to the business’s efforts to transform itself. Cruise, a start-up acquired by GM, now has its “robotaxis” on the streets of San Francisco, continuing tests in preparation to launch a fully driverless service in the city. Its lawyers created a shared development agreement with carmaker Honda to share the costs of developing and building new autonomous vehicles.

Lawyers help their companies compete by creating new business models and enabling innovation. GM’s general counsel Craig Glidden says the lawyers have shifted “to be much more proactive and to be more of a participant and co-creator than a scrivener”.

The move has involved changing how the lawyers work day-to-day, and making sure they are more involved in the early stages of developing new ideas. They now collaborate more across the business, he says, “instead of being that function you visit when you’ve had a problem”.

The carmaker now describes itself as a mobility company and is investing heavily in self-driving cars and new transport services.

“I think disruption is the new normal,” says Mr Glidden. “If you think about the automotive business in the 1920s and where it is today, that same rate of change that took 100 years is going to happen in 25,” he says.

To innovate and create new business models increasingly requires lawyers to work across disciplines and professions, which is a change for most professionals trained in the silo of a law firm. Mr Glidden points to what happens when privacy questions arise as these problems require a co-ordinated response from the legal, policy and communications teams.

Also in the automotive sector, Waymo develops technology for self-driving cars. Under general counsel Kevin Vosen, it has created a number of multidisciplinary legal teams that focus on areas including product safety and cyber security.

Lawyers work alongside engineers and safety experts, Mr Vosen says. The role is collaborative and crosses disciplines. It is also more strategic in its aims: “If we don’t deal with risks appropriately, the company won’t succeed.”

“It really is the internal legal team that is on the frontline in bringing innovation to the marketplace,” says Mr Glidden.

“Probably a majority of our work now is in assisting the business [to] tackle new frontiers . . . we are redefining longstanding relationships that are redefining our industry,” he says.

After a spell as chief legal officer at Nokia, Louise Pentland joined PayPal in 2015 when it was spun off from eBay.

Ms Pentland has led new approaches to closing the gender and ethnic pay gap at the online payments company. She has also helped launch its innovation lab, which has become an important source of ideas for the business.

Lindsey Haswell joined Lime as general counsel in 2018, only a year after the launch of the electric scooter and bike hire company.

Formerly an in-house lawyer at Uber, Ms Haswell has played a crucial role in enabling Lime’s growth by implementing tech, such as collaboration system Jira, to allow for faster responses to disputes. This work has helped maintain good relations with regulators, which is vital for Lime’s business strategy.

Since joining Juniper in 2015 as its general counsel, Mr Martin has enhanced legal performance at the network management group by adding technology and operations specialists.

Lawyers now account for just a third of the headcount of Juniper’s legal team, which makes extensive use of data to manage legal spending and compliance. Analysis tools introduced by the legal department are used across the company.

Scott Offer has extensive experience in business transformation. He took Motorola Mobility public in 2011 and then guided the business through its sale to Google and then Lenovo, where Mr Offer became general counsel.

Since joining Flex in 2016, Mr Offer has supported the business in its move from electronics manufacturer to a business focused on designing and developing new products for customers.

Since joining Pearson from Coca-Cola in 2014, Mr Tellmann has played an important role in the restructuring of the FTSE 100 company, which started in 2017.

As general counsel, he has guided the publishing and education business through a disposal of assets and reduced legal expenditure.

Mr Tellmann has also redefined the legal team’s mission so that it evolves in step with the business.

When Caroline Tsai started at Western Union in 2017, she was in charge of a team of 200. This quickly became 3,000 when she was asked to take on the compliance function as well.

Ms Tsai has since created a fintech practice group within Western Union. She has also hired a lawyer to lead an expansion of the company’s procurement and technology team, raising the understanding of tech within her team. 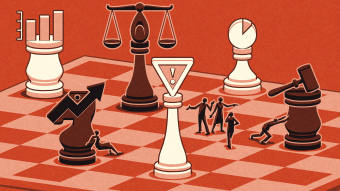