Twenty-one years after opening, the Francophile’s favourite destination shop is launching a line of its own

We’ll send you a myFT Daily Digest email rounding up the latest Womenswear news every morning.

When Val and Vanda Heng-Vong moved to London in their early twenties, one thing became clear: the “understated but intriguing” style of dressing the sisters had grown up with in Paris was a hot commodity. It was this realisation that led them, in 1999, to launch Aimé, a multi-brand lifestyle boutique in Notting Hill that specialised in functional womenswear with a French twist. It was among the first places in which women could buy the then-emerging designer Isabel Marant, as well as other Paris favourites such as Vanessa Bruno and the utilitarian APC.

Now, after more than two decades in business, this month sees the sisters launching their first collection designed in-house. Aimé’s own label will be a progression of the style principles it was founded upon: timeless designs, precise finishings and wearability. Pieces will be released in “chapters”, each coinciding with the month that the wearer needs them most. First up is an eight-strong set of long- and short-sleeved shirts for autumn. 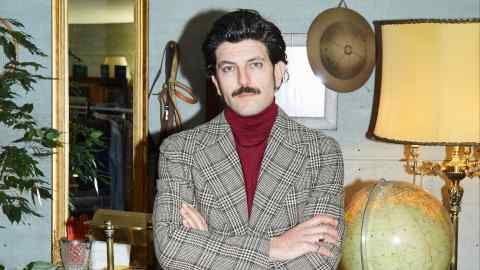 For the initial release, Val and Vanda have kept things classically Aimé – think Lee Radziwill in 1960s Paris matched with a 1970s Charlotte Rampling on the Côte d’Azur, both of whom feature on the sisters’ moodboard. “We wanted our shirts to be perfect in their simplicity,” explains Vanda. Silhouettes have a feminine touch – pleats, frills and turned-up cuffs feature throughout, while the colour palette has been kept to sage green, shell pink and sky blue. There’s also an option for customers to personalise their shirts through Fitzrovia embroiderers Hand & Lock.

In essence, Aimé’s goal is to produce a long-lasting, thoughtful wardrobe. A cashmere collection will follow the shirts in winter, while an embroidery edit will drop next year. As shopkeepers and buyers, the sisters are often frustrated to learn that a favourite piece of clothing from a brand has been updated in a bid to follow trends. “We wanted to free ourselves from that need,” says Val. “Sometimes these changes are just noise, but our collection hums quietly.”