Why work is not the right place to seek intimacy

The bitter truth, and one that many people struggle to accept, is that work will never love you back. This can be a harsh blow for those who persistently attempt to meet their emotional needs in the workplace, which I have found to be a recurring theme in my consulting room over the years. The fantasy that you are “special” to your boss because he or she smiles at you or shows appreciation can disguise the reality that work is predominantly a transactional affair.

Once an illusion sets in that the boss cares more for you than he or she actually does, the obsession to retain his/her attention can overtake one’s capacity to think creatively and make sound decisions.

This confusion normally results from people attempting to recreate at work what they experienced from their parents in early life.

Kenneth Eisold, a New York-based psychoanalyst and organisational consultant, says people’s deep longings and fears often surface when faced with authority. Where parents have provided an inadequate sense of security, their offspring may settle into work patterns where they attempt to recreate an alternative relationship that provides, if not actual security, then at least the fleeting feeling of it.

Children need to believe they have good parents to feel safe. They are unlikely to tolerate the truth that their parents are failing them in this regard. “Whatever you’ve done as a child to hold on to the belief that your parents love you gets transferred to other relationships,” he explains. “This often arouses very profound infantile motivations that are still alive. It means you don’t see certain things [about your boss] or you elicit their responsiveness in order to gain the kind of attention and care that you’re craving.”

Focusing on work relationships to the neglect of personal ones may also hamper intimacy with family and friends.

As one former patient said to me: “The risk is that family life disintegrates around you while your professional life heads gracefully forward until you reach a point where it’s too late to recognise what you’ve lost.”

For another ex-patient of mine who worked in education, the obsession to elicit interest and admiration from her headteacher meant that she made herself available 24/7, to the cost of her family. Amid her hard work and dedication, she misconstrued that she was the centre of her boss’s world.

“She had me believe [that] I’m amazingly intelligent and that everyone wants to be with me,” she says. “I had to work so bloody hard to be the golden girl. I even made a separate ringtone so that I would know if she was calling — even at the expense of ruining my children’s bedtime routine because I would leave them with the television when she needed me.”

This patient’s mother had been a single parent whose narcissistic tendencies meant she was often absent, and she gave her boyfriends precedence over her two daughters. When she was home she was often stressed and aggressive.

My patient learned from her mother that the way to connect to a parental figure was to focus on their needs to the exclusion of her own needs, and by extension, those of her children.

To sustain this, she had to ignore the fact that her “special place” was contingent on a certain type of behaviour. When the reality became more apparent in therapy, she reduced her more extreme pleasing behaviour — only for her boss to react aggressively and eventually make her job redundant.

“The end was a disaster because I started to have strong opinions and to see that she wasn’t as great as I thought she was,” my patient says.

For dependent personalities such as this, a demotion or dismissal can feel deeply personal and reignite wounds from the past, making recovery even more difficult.

As her illusions came crashing down she faced the harsh truths of who her boss actually was, and how she herself had colluded in a relationship that harmed her career development and family life.

Mr Eisold says: “With a narcissistic person you can always have some success because, by trying to please them, you capture their attention fleetingly. But that inconsistent responsiveness often establishes the most profound patterns because you keep thinking: ‘If I figure out more accurately what she wants, then she’ll love me.’” 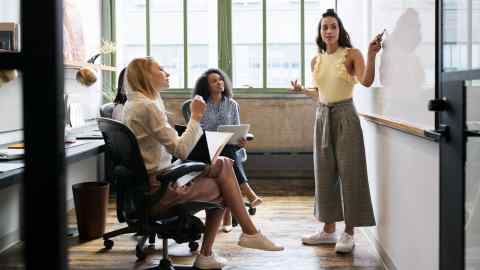 People also turn to colleagues for closeness because they find work an easier emotional terrain to navigate than relationships at home. Work offers prescribed rules and norms about how to behave, and its stream of people, meetings and tasks all limit how close people can be. The emotional intelligence you have learnt in the office, however, may fail you when having to deal with disputes at home. Ultimately work has an “end to the day”, whereas in contrast there is little respite from family life.

Another patient of mine craved emotional security because his mother was often unresponsive and rejecting. He pushed aside thoughts that his chief executive used him for his own gain. As can be the case, a needy boss may wrongly attribute the subordinate’s hard work as evidence of genuine affection.

“Unconsciously I think we had an unholy pact,” he explains. “I know [now] that the reason I wasn’t getting a promotion was that he had me where he needed me to be, and I wasn’t willing to force a difficult conversation and risk the security of knowing that I was not likely to be rejected at work.”

Facing the truth would not have allowed him to sustain the level of hard work his CEO required. Only by separating in his mind his relationship with his mother from that with his boss, as well as learning to rely more on his partner for security, did he have the strength to leave his job after many years and then build his own successful business.

While work can offer satisfaction and rewards, real love and security is best sought from family and close friends. Once you stop seeking these from work relationships, however, you may be left with the bigger challenge of examining your personal life.

The writer is a psychotherapist and business consultant