Hopes of a quick economic recovery gave global stocks a lift on Tuesday, taking them to their highest levels since the coronavirus pandemic first took hold in early March.

The easing of lockdown measures across the world gave cautious grounds for optimism that the worst may now have passed. In the US the S&P 500 moved above the 3,000 point level for the first time in nearly three months, though the index pared gains late in the session on renewed concerns about new US tariffs against China.

“The recession has likely ended,” said Exane BNP Paribas strategists in a research note. “Lockdowns are being gradually reversed across most countries. And high frequency measures of activity suggest that economic growth has bottomed.”

Investors were switching into riskier assets, with travel and leisure stocks leading the gains in response to moves by Germany and Spain to lift their travel restrictions. The UK’s FTSE 100 closed up 1.2 per cent and Germany’s Dax 30 benchmark rose 1 per cent.

On Wall Street the S&P 500 ended up 1.2 per cent, having risen more than 2 per cent during the session, while the Nasdaq Composite erased an opening jump of nearly 2 per cent to close up just 0.2 per cent. A slide from highs came after Bloomberg reported that the Trump administration was considering a range of sanctions on Chinese officials, businesses and financial institutions.

Asian markets had climbed earlier in the day, with speculation of new stimulus measures from China lifting the CSI 300 index of Shanghai- and Shenzhen-listed stocks by 1.1 per cent. Hong Kong’s Hang Seng index rebounded 1.9 per cent, having sunk last week in response to moves by Beijing to impose new national security legislation.

Investors are taking the view that reopening is almost equivalent to rebounding. Not so fast

Global markets were hit hard when coronavirus lockdowns started in late February and early March, but a wave of support from central banks and governments kindled a rally from March 23. The S&P 500 is up by 34 per cent in that time, while Europe’s Stoxx 600 index is up by 25 per cent from the seven-year low it hit in March.

Fiscal stimulus “eventually flows back to corporate profits”, Exane said. “What also supports a sharper than usual recovery in earnings is that financial conditions have never been this easy during any of the recent recessions.”

Positive market sentiment comes as the daily death rate in the US from Covid-19 hovers at its lowest level in about two months, following declines in death rates in many other countries.

Ian Tomb, an analyst at Goldman Sachs, said it was encouraging that countries that were early to lift their lockdowns such as New Zealand had not seen a resurgence in cases so far.

“With coronavirus concerns moderating, limited evidence so far that opening up has triggered fresh medical concerns, and the potential negative effects of lockdowns continuing to accrue, markets have tentatively started to take a more positive view of reopening,” he said.

Travel companies surged, with Tui up 50 per cent and airlines including easyJet and British Airways-owner IAG 20 per cent higher after Germany announced a vote this week on whether to relax travel restrictions by mid June. That followed Spain saying on Saturday it would be open for foreign holidaymakers from July.

Shares in the four largest US airlines were all up 10 per cent or more. US banks also jumped, with Citigroup, Wells Fargo and JPMorgan Chase all gaining more than 7 per cent.

“Banks are a port in the storm this time” compared with during the 2008 financial crisis, Jamie Dimon, JPMorgan chief executive, said in an investor conference presentation on Tuesday. “First of all, they’re all very well capitalised. They all have very healthy earnings streams. They all are more diversified. Some of the regulations were good for that, for liquidity and capital etc. In some ways, they’re even better capitalised than people think.”

Investors are showing a greater willingness to move away from haven asset classes and into riskier territory, denting the US dollar in the process. The dollar weakened against most of its peers on Tuesday, with the Australian dollar gaining 1.4 per cent to its strongest point since March 6.

“The [US] dollar has become such a bellwether for risk sentiment in this crisis and with even the [Hong Kong stock market] bouncing, long positions in the dollar have capitulated,” said Kit Juckes, a macro strategist at Société Générale.

However, some economists warn that lower consumption in the US and a slowing recovery in China give reason to doubt that rallies in riskier assets can be sustained.

“It seems that investors are taking the view that reopening is almost equivalent to rebounding. Not so fast,” said Max Kettner, strategist at HSBC. “That leaves us with the possibility of markets continuing to trade in a rather volatile sideways range.” 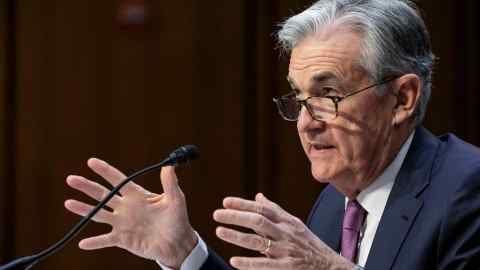 Boris Johnson, the UK prime minister, indicated on Monday that the country’s economy will open further — if the spread of the virus is contained — with all non-essential retailers able to trade on June 15.

That helped sterling strengthen against the US dollar, rising more than 1 per cent to $1.2344 — its highest level in almost two weeks.

Economic activity in the UK for the week starting May 11 returned to almost 80 per cent of normality, driven by higher retail sales both online and offline, according to analysts at Barclays.

Japan’s Topix index added 2.2 per cent after Asia’s second-largest economy lifted a nationwide state of emergency aimed at curbing the spread of Covid-19.