Wages are stagnant, but individual tax accounts could revolutionise collection and reduce evasion

Go back 30 years to the time when personal computers were only just starting to go mainstream, displacing typewriters. The way people were paid and taxed then would be familiar to someone in today’s workforce.

Payroll was already computerised in most companies in developed economies, while income taxes and social security contributions were deducted at source. In the UK, for example, the collection of these charges, without tax returns, had existed since the mid 1970s for most workers.

The big difference would have been the level of wages. After taking account of inflation, average UK wages in 2019 are 45 per cent higher than in 1989 even though they have stagnated over the past decade.

It would be wise not to extrapolate the past 30 years into the future, according to economists and experts in the tax and technology fields. Wage performance may be worse and we should expect taxes to be higher — but technology could revolutionise tax collection and how individuals interact with the state.

The hangover from the financial crisis has hit people’s pockets, with wages stagnating and prospects relatively gloomy.

Although making predictions over 30 years is fraught with danger, especially given the weakness in productivity since the financial crisis, the evidence points to lower wages, says Jonathan Cribb, a senior research economist at the Institute for Fiscal Studies.

“I can’t see lots of positive things that see us getting back to the average 2 per cent annual increase in real wages we enjoyed in most of the postwar era,” he says.

Taxes are almost bound to rise. Across advanced economies, the next 30 years will witness an unprecedented ageing of populations. The IMF says that by 2050 the ageing population will “exert pressure on public finances” with large increases in spending on pensions and healthcare. This will require “sharp cuts in other public spending” or “large tax increases that could stymie economic growth”.

David Willetts, the Conservative life peer, says the decades ahead will be different from the past 30 years. “The age of tax cuts is over. Instead politics will be about who pays more and how much they pay.”

It is not all bad news, however, because technology in taxation is improving. This will make it easier to collect taxes, reducing evasion and increasing perceived fairness.

The taxman of the future is likely to be less visible yet more sophisticated. Taxes could be individualised, not quite to the point of taxing people on their effort, as some economic theory suggests is optimal, but still radically altering the way money is deducted.

Tax collection will rely more heavily on real-time data, according to Pascal Saint-Amans, director of the Centre for Tax Policy and Administration at the OECD. “We’re talking hundreds of billions worldwide,” he adds. Being able to track information “has always been the taxman’s dream”.

In the UK, HM Revenue & Customs has embarked on a “making tax digital” programme. This is initially linked to value added tax, but is due to be rolled out to all charges, enabling adjustments in real time.

In a report published last week, the UK Office for Tax Simplification, an independent group advising government on streamlining revenue collection, said that moving towards individual tax accounts, particularly for the self-employed and landlords, “would enable information to be reported, and potentially tax to be paid, in or closer to real time”.

Other countries are far ahead of Britain. States as diverse as Russia, Israel and Portugal have introduced personal tax accounts that gather data on citizens’ income and expenditure. This allows them to personalise tax collection, verify who might be evading taxes and drive up collection rates.

Mikhail Mishustin, head of the Russian tax service, which runs a technologically advanced VAT system, told the Financial Times that he hopes technology will make people’s lives easier while automatically collecting the right taxes. “We want people not to pay attention to how they pay taxes in future.”

Those looking further ahead anticipate the changes that could take place once tax authorities have immediate access to information on people’s incomes and spending.

Individualisation of taxes may make the rise in rates more acceptable to the population at large. Social safety nets such as the UK’s universal credit system could offer automatic assistance when people fall short of income without filling in forms, while consumption taxes could be streamlined.

Rita de la Feria, a law professor at Leeds university, suggests that VAT could act in a similar way to the welfare state, paying money back to purchasers who the tax authorities know to be on a low income. This is possible with today’s technology, she says, and “provides a significant reduction in inequality”.

Any move towards tax personalisation would transform the way we work, what we earn and what taxes we pay. There has been little change over 30 years, but demographic and political pressures are likely to force a faster pace by 2050.

Explore the Special Report
READ MOREHow we will live in 2050
In 2050, will gig economy workers answer to robo-bosses? 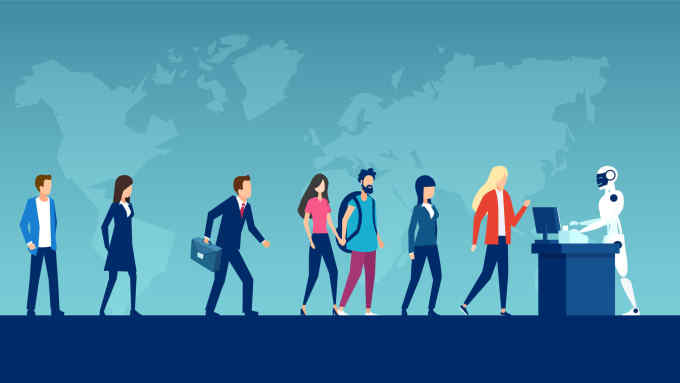