Boeing to axe 12,000 US workers even as Max assembly resumes

Boeing plans to dismiss more than 12,000 workers in the US, it said on Wednesday, even as it reactivates the assembly line for the troubled 737 Max.

The company is also reducing its workforce outside the US, with more than 630 departures announced in Australia, New Zealand and Canada so far. More cuts will follow.

The moves follow chief executive David Calhoun’s announcement in April that Boeing, which employs 160,000 worldwide, would cut its workforce by 10 per cent as the pandemic hurt demand for its aircraft.

Before Covid-19, Boeing was already reeling from the 2019 grounding of the Max following two fatal crashes. The company halted production in January at its factory in Renton, Washington, after building a stockpile of planes it was unable to deliver to customers.

Proposed changes to software on the Max and to training procedures for pilots have yet to be approved by regulators, and the company has pushed back the date at which it expects to be able to resume deliveries into the third quarter.

Our industry will come back, but it will take some years to return to what it was just two months ago

Production will resume “at a low rate”, Boeing said. The goal is for workers to manufacture 31 Max jets per month by 2021, with the ramp-up pace determined by how quickly customers take deliveries.

It said in April that it would cut production on almost its entire portfolio of jets.

“The Covid-19 pandemic’s devastating impact on the airline industry means a deep cut in the number of commercial jets and services our customers will need over the next few years, which in turn means fewer jobs on our lines and in our offices,” Mr Calhoun said on Wednesday in a memo to staff. “I wish there were some other way.”

The airliner manufacturer is not alone in slashing jobs and production. Arch-rival Airbus has cut production by a third, with more to come, decisions that will lead to job losses in the thousands.

General Electric laid off 10,000 workers in its aviation unit this month, and Rolls-Royce, the UK manufacturer of aero-engines, plans to cut 8,000 jobs.

Boeing has raised $25bn from the bond market to access the cash it needs to navigate the crisis.

S&P Global Ratings said the company’s 2020 cash outflow is expected to range between $19bn and $20bn, up from a previous forecast of $12bn.

Mr Calhoun said there were “green shoots” in the airline industry, with customers reporting more bookings than cancellations over the US holiday weekend.

Still, “these signs of eventual recovery do not mean the global health and economic crisis is over. Our industry will come back, but it will take some years to return to what it was just two months ago.” 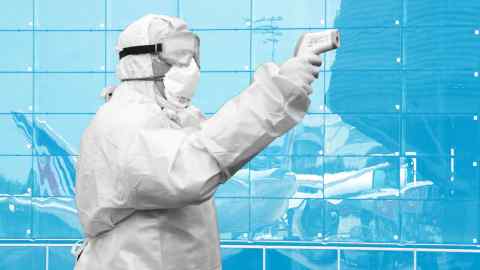 The company “will have to adjust our business plans constantly until the global pandemic stops whipsawing our markets in ways that are still hard to predict”.

Boeing began attempting to shrink its workforce in April by offering a severance package to volunteers, with one week of severance for every year of service, plus three months of continued healthcare benefits.

Most of the employees allowed to take the severance package work in the commercial aeroplane division rather than the defence business, labour union officials said.

Military aircraft and missiles have become a bigger chunk of Boeing’s total sales as the Max crisis and then Covid-19 have crippled revenue for the commercial division.

Get alerts on Boeing Co when a new story is published