How to digitally downsize your wine cellar

Simon Farr, co-founder of Bibendum, has a new business for selling off excess wine

The postwar baby boomer generation was central to the success of Simon Farr’s first fine wine business, retailer Bibendum. Thirty-five years after he co-founded it, his new venture, Cru, is helping this same generation to digitally downsize the cellars they amassed during the good years.

Bibendum’s arrival in the early 1980s revolutionised the buying of quality wine. Mr Farr recalls a “huge process of democratisation” as the City of London prospered in the wake of the Big Bang, the UK banking deregulation of 1986. The newly wealthy were reading the sunny Mediterranean cookbooks of Elizabeth David; they wanted “proper food, and proper wine to go with it”.

Yet buying good quality wine to drink at home in any quantity was difficult. Wine lovers who had not gone to the right school — as Mr Farr puts it — were intimidated by the old-fashioned vintners in St James’s, a smart area of London, which controlled the top end of the market.

Bibendum, by contrast, wanted to sell the best wines to everyone. When it threw open the doors of its distinctive Art Deco warehouse in Primrose Hill, north-west London, it sold wines to both the wholesale and retail markets, with its customers including “supermarkets, airlines, restaurants, the Dog & Duck [a proverbial pub] and Sid and Doris from Acacia Avenue”.

Cru, which Mr Farr founded in 2013 when he bought Bibendum’s private client business, is now busy helping these clients through a “deflationary period”. Customers in 40 countries can use the digital platform to buy fine wines, store them and sell them (for a fee); to manage their wine portfolio’s.

“It takes time to work through a cellar of wine, which is why a lot more [of Cru’s older customers] are net sellers,” Mr Farr says. Many people “simply bought too much” in the 1980s, 1990s and 2000s and are now downsizing, or counting the costs of paying for storage.

They can trade the stock in their wine cellar internationally — perhaps with their tablet computer in one hand and a glass of something in the other.

Mr Farr says it is no accident that Bibendum’s success coincided with the “powerful purchasing years of the boomers”. Today, as those customers enter their 70s, many are begrudgingly starting to accept that they own more wine than they can ever drink.

Competing with the established wine auctions market, Cru’s digital portfolio tools show at a glance how well one’s liquid investments are performing, with live price feeds, bid/offer spreads and multi-currency capability. Just as investors can set up share price alerts from a stockbroker, if a wine in a customer’s portfolio shoots up in price (perhaps due to rising demand in Asia) they will get an email notification.

“They might think, this wine has gone up a lot and I’m never going to drink it all — so I’ll sell half and hold the rest for free,” Mr Farr explains.

However, he says some of Cru’s most active customers are City traders “who love day-trading in wine on the side”. They can notch up bigger trading volumes than its brokerage customers.

Mr Farr describes himself as “massively under-educated”. He dropped out of school in the early 1970s and ended up in Bordeaux helping to bring in the wine harvest. He liked it so much he stayed for three years. “I got to know how to grow grapes,” he says proudly. “In those days, we didn’t do things like careers.”

Back in London, he tried to get a “proper job” — and failed. So, while working in a wine shop, he decided to start his own business. “I invented an emergency champagne delivery service for London nightclubs that the big champagne houses wouldn’t deal directly with,” he says.

Mr Farr did it all — driving the van, buying and selling the wines and doing the accounts. “I got a fantastic rate per case. Clients would pay cash and champagne houses gave me lots of credit, hence I made money on deposit as interest rates in 1976 were over 15 per cent. It was actually a finance business — although I didn’t know it at the time.”

In 1980, he agreed to have lunch with Sheldon Graner, the man behind wine retailer Majestic Vintners. “He turned up in a green convertible Rolls-Royce Corniche with gold handles and a car phone.” At Robert Carrier’s restaurant in Islington, Graner outlined his vision for creating a modern wine warehouse. “By the end of the lunch,” Mr Farr says, “I was working for Sheldon.”

The initial Majestic business ended up in receivership. During the sales process, Mr Farr got to know the eventual underbidder — Chris Collins, a City figure who had just sold a business and was looking for a new project. “I basically pitched him the idea of Bibendum,” Mr Farr says.

Majestic had been trying to take on the mass market, competing with the supermarkets. “To go more upmarket, you had to enter the stuffy old world of St James’s. It needed a shake-up. In 1982, it was not done to be a wine importer, wholesaler and retailer. I thought that was nonsense — and, fortunately, so did Chris.”

Mr Collins went on to become the chairman of Old Mutual, but Mr Farr stayed with Bibendum as deputy chairman until its sale last year to Conviviality, the UK-listed independent drinks distributor.

Western boomers are entering their twilight years, but Mr Farr admires the adventurous tastes of the next generation of UK wine drinkers. For them, wine is about the experience, and not the expense, he says, noting they are not afraid to try wines from Santorini in Greece or Georgia: “They are buying to consume now. Most people don’t have a house with a wine cellar these days. Most people don’t even own a house.”

Yet he is saddened that buying Bordeaux en primeur is now something only the wealthiest can aspire to (see related article). “Bordeaux used to be cheap for the people who bought early, because they were taking all the risk,” he says. “Nowadays, nobody is pricing in that risk spread.”

He rates older Bordeaux vintages as a “screaming bargain” for this reason. “So many people have tasted them and written about them, you know what you’re getting. Plus you haven’t had to finance 20 years of storage waiting for them to mature . . . In 20 years’ time, I’ll be 84. Will I be buying en primeur to drink in another 20 years, or an older vintage that will see me out?” 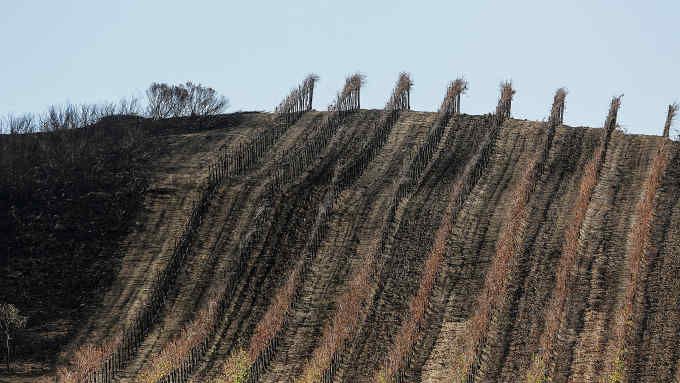 In this report, how California’s wine country is recovering after October’s fires; what Brexit means for the French wine industry; and a portfolio of female winemakers