Theresa May does ‘not agree’ with Trump’s refugee ban

Theresa May has been forced to make a hasty U-turn over Donald Trump’s ban on refugees from Muslim-majority countries, issuing a midnight statement saying she does not agree with the policy.

The British prime minister said she would appeal to the US if the ban affected British citizens. “We do not agree with this kind of approach and it is not one we will be taking,” she said.

The US president signed an executive order on Friday banning the entry of refugees and visitors from seven Muslim-majority countries. It has caused confusion and panic among travellers, with some turned back from US-bound flights.

The row over the issue threatens to overshadow what had been widely seen as a successful visit by Mrs May to Washington last week, where she sought to find common ground on foreign policy with the new US president.

On Saturday, pressed by British journalists during a press conference in Ankara, Turkey — on her way back from the US — she had refused to condemn Mr Trump’s refugee ban. Apparently reluctant to damage her relationship with Mr Trump, the prime minister declined to answer a question on the subject three times.

After being heckled by British journalists to answer the question, Mrs May said: “The United States is responsible for the United States’ policy on refugees.”

This elicited criticism from other politicians including Jeremy Corbyn, the Labour leader, who said the prime minister had demonstrated a “weak failure” by refusing to criticise the US president.

“President Trump’s executive order against refugees and Muslims should shock and appal us all,” he said. “Theresa May should have stood up for Britain and our values by condemning his actions. It should sadden our country that she chose not to.”

Mr Trump is expected to make a state visit to the UK in June, where he will meet the royal family. On Sunday an online petition calling for Mr Trump to be denied an official state visit had attracted almost 300,000 signatures and hundreds more were being added every few seconds.

Mr Corbyn said: “I’m not happy with him coming here until the ban is lifted.” Tim Farron, leader of the Liberal Democrats, said: “Any visit by President Trump to Britain should be on hold until his disgraceful ban comes to an end. Otherwise Theresa May would be placing the Queen in an impossible position of welcoming a man who is banning British citizens purely on grounds of their faith.

Nadhim Zahawi, Conservative MP for Stratford-on-Avon, said he had been told by a US immigration lawyer that he would be affected by the ban because he was born in Iraq. “A sad, sad day to feel like a second-class citizen. Sad day for the USA,” he said. 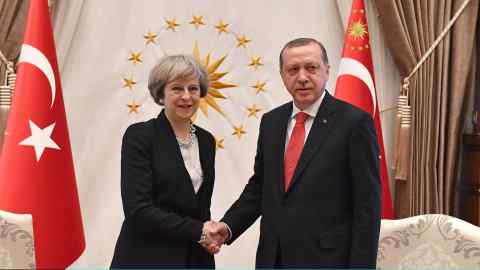 Binali Yildirim, Turkey’s prime minister, was openly critical of Mr Trump’s refugee ban, saying his own country had done the “sacred and holy” thing by opening its doors to people fleeing for their lives from Syria. “You can’t stop this issue by building walls,” he said.

There was also criticism from prominent figures outside politics. JK Rowling, one of Britain’s most successful authors, compared Mrs May to Neville Chamberlain appeasing Hitler before the second world war.

Sir Mo Farah, the athlete who was born in Somalia, said: “I am a British citizen who has lived in America for the past six years — working hard, contributing to society, paying my taxes and bringing up our four children in the place they now call home. Now, me and many others like me are being told that we may not be welcome.

“It’s deeply troubling that I will have to tell my children that Daddy might not be able to come home, to explain why the president has introduced a policy that comes from a place of ignorance and prejudice.”

The Queen, Sir Mo added, had knighted him in the New Year honours list: “President Donald Trump seems to have made me an alien.”

In a statement at 12.05am on Sunday, Mrs May’s spokesman repeated the line that immigration in the US was a matter for Washington. But he added that the government would raise the issue with Washington if there was any impact on British citizens. “We are studying this new executive order to see what it means and what the legal effects are, and in particular what the consequences are for UK nationals.”

Get alerts on Theresa May when a new story is published