Once a staple of Victorian pubs, this pottery is now prized by collectors

In her Mayfair mews gallery, Lyndsey Ingram is sitting in front of a selection of patterned mugs and jugs. The pottery pieces are all mochaware, a style of ceramics produced largely in Staffordshire from around 1780 to 1920. “And yet it looks so contemporary!” Ingram exclaims, picking up a graphic example. “That pattern! I just love the idea of somebody 200 years ago thinking, ‘Gosh, that looks pleasing.’”

The focus of Ingram’s gallery has thus far been prints and works on paper; mocha, meanwhile, is a personal passion, displayed at her London home alongside contemporary art. “I have mocha pieces on shelves, in my kitchen. I keep teaspoons in a mochaware beaker,” she says of the pieces bought mostly from Peterborough-based ceramics dealer Martyn Edgell, who also has a soft spot for this workaday tableware. “It was made for use, not decoration,” he explains, “so it doesn’t exist in the same numbers today as things that were put in cabinets.”

Those examples that have survived are now highly prized. “The abstract nature of the patterns speaks to us in a way that’s completely different to a lot of antique pottery,” says James Mackie, a former Sotheby’s specialist in impressionist and modern art, who since 2020 has worked as an interior designer and art adviser. “I’ve been collecting mocha bits and pieces for years. One looks like a giant egg cup, with an extraordinary rope-twist design in acid green and yellow. I love the colours and the natural forms.”

“Certain motifs were repeated,” adds Ingram of designs such as “looping earthworm” or “cat’s eye”. “The fan pattern is the rarest, and the most common ones are those that look like coral or trees.” After 1850, the latter were produced predominantly to be used in pubs and taverns. “The mugs usually have Queen Victoria’s initials on them, guaranteeing a pint or a half-pint,” explains Edgell, adding that the tree-like markings give mochaware its name, as they resemble the natural forms in the moss agate – known as mocha stone – found in the Yemeni city of Al-Mukhā. “It’s called a dendritic pattern in geology, and on the pottery it was painted as one line that was dispersed by the heat in the kiln. There are old wives’ tales about it being created with urine and tea, but it isn’t.”

All of the patterns were made by adding pigments to the slip – a watery clay mixture on the surface – before firing. “They were decorated a bit like icing on cakes,” says Edgell of the methods of dipping, trailing, marbling and combing the slip. “Geometrical patterns were also inlaid into the clay, creating a 3D look.” Some mochaware was also made in France, he adds, “but it’s always quite distinctive, and people don’t like it as much”. Today, the late potter Don Carpentier’s reworking of mocha techniques can be seen on YouTube, while ceramicists continue to make neo-mochaware – sold in stores including Tory Burch and Choosing Keeping.

Interest in mocha is highest in the US. East Coast auction house Bonhams Skinner regularly has examples in its decorative arts sales (including an early 19th-century “tree” pitcher and an inlaid grid-pattern mug, which sold for $875 and $1,063 respectively in November 2021). As does Freeman’s, which in May sold a collection of 45 pepper pots – amassed over 40 years by a couple in Greenville, Delaware – for $11,340 (more than double its $3,000-$5,000 estimate). “The interest in mocha in that sale was especially strong,” says decorative arts specialist Andrew Taggart. “Generally, collectors gravitate towards bolder surface patterns.”

For British interior designer Ben Pentreath, it’s the “plainer 19th- century tankards, with their graphic stripes and bizarre tree forms” he’s drawn to. “They would have been ubiquitous in every country pub,” he says of the pieces lined up in his zingy- yellow Dorset kitchen. “eBay used to be a brilliant source of £30 tankards that now cost a small fortune.” By comparison, he adds, “the wonderful striped and marbled examples – the Martyn end of the market – have never seemed more sensibly priced”.

“The American market pushes the prices up,” says Edgell, who focuses on pieces made before 1850. The best thing he’s had recently is “a double jug – it’s like two jugs joined together”. It just sold for $10,000.

HTSI
Why we’re all falling for marriage cupboards 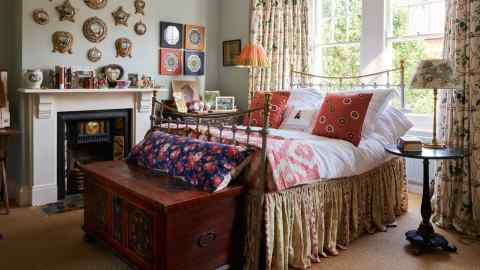 Edgell notes that most of his British buyers are designers or artists. Indeed, one famous fan was British painter Ben Nicholson, whose own mocha collection was often incorporated into his still-lifes, as explored at Chichester’s Pallant House Gallery last year. This month, Lyndsey Ingram will add to the mocha conversation with a show pairing more than 200 pottery pieces stockpiled by Edgell with an interiors scheme by James Mackie – echoing the banded patterns – and artwork by Georgie Hopton, whose practice spans collage, photography and hand-blocked wallpaper.

“I want to make the show feel visually exciting,” says Ingram. “I’m hoping that we can open it up to people who might buy a piece not because they collect Staffordshire pottery, not because they live in an 18th-century English house, but just because it’s a beautiful thing.”