Sustainable materials are a vision of fashion’s future

For thousands of years, humans have outfitted themselves in silk and wool, cotton and linen, fur and hides. You can probably find most of these, if not all, in your own wardrobe.

But a decade from now, you might well see fewer such time-tested materials hanging there. Your “silk” dress might be derived from orange-peel fibre or yeast fermented in a lab. Your “leather” shoes or handbags could be crafted primarily from pineapple waste or lab-grown mycelium, the network of root-threads growing beneath mushrooms. At the very least, your cashmere jumper or nylon windbreaker is likely to be made at least partly from recycled material.

As anxiety about climate change and the welfare of garment workers has deepened, the $2.5tn global fashion industry is under pressure from consumers — and increasingly governments — to improve its ecological and social footprint. Textile manufacturers, once concerned chiefly with performance and price, are now introducing a range of materials to cater to surging demand from brands for “ethical” fabrics. Venture capitalists are pouring hundreds of millions of dollars into start-ups to bring lab-grown leather and silk alternatives to market.

New materials “are no longer just being created with performance in mind”, says Claire Bergkamp, chief operating officer of Textile Exchange, a sustainable-fibre trade body, and the former sustainability and innovation director at Stella McCartney. “There’s a real uptick in innovation to solve environmental concerns.”

The demand for new materials is being driven by a change in consumer values. In survey after survey, people say they prefer to buy clothing from so-called sustainable brands and are even willing to pay more for it. The success of environmental champions such as Patagonia and sneaker start-up Allbirds has caught the attention of fashion executives keen to appeal to the next generation of shoppers.

Collective initiatives such as the UN’s Fashion Industry Charter for Climate Action and French president Emmanuel Macron’s Fashion Pact have galvanised brands from Burberry to Nike to Inditex — the parent company of Zara and the world’s biggest clothing retailer — to commit to substantially reducing carbon emissions within their companies and supply chains.

When the French luxury conglomerate Kering, whose brands include Gucci and Saint Laurent, pledged in 2017 to cut its environmental footprint by 40 per cent by 2025, the company was aware it couldn’t do it solely with what was available on the market.

“We knew that to reach this target, our own projects linked with raw materials — for example organic cotton, organic wool, sustainable cashmere — would only reduce our footprint by about 20 per cent,” says Marie-Claire Daveu, Kering’s chief sustainability officer. “So if we want to reduce by 40 per cent, we need to find disruptive innovations.”

In 2013 the company had established a Materials Innovation Lab, which functions as a library for certified-sustainable fabrics — there are now 2,800 of them — and extended an invitation to designers at Kering’s brands to bring in materials they liked, to see if a lower-impact alternative could be found.

The conglomerate has also partnered with the Amsterdam-based incubator Fashion for Good to help identify and grow start-ups working at the intersection of fashion and sustainability. Daveu points to Balenciaga’s October 2020 catwalk collection, comprised of 90 per cent recycled, upcycled or certified-sustainable materials, as an example of the changes brought about by these investments.

Another driver of change — particularly when it comes to fur and leather alternatives — is animal welfare. This spring, Hermès, maker of the Birkin bag, caused a stir when it announced that a new edition of its classic Victoria travel bag, launched in 1997 and typically crafted from calfskin and lined in canvas, would be reissued primarily in lab-grown mycelium. This material, developed by the California start-up MycoWorks, is made by combining agricultural waste and mycelium to form a sheet that can be tanned just like real leather; Hermès plans to do the tanning at its own facilities in France. (The bag is not Hermès’s answer to the increasing demand for vegan footwear and accessories — this new version still incorporates calfskin.)

Mycelium can be grown in weeks, not years, and Matthew Scullin, chief executive of MycoWorks, says the attraction for brands is as much about speed and scalability as environmental footprint. “Leather is a 19th-century material in a 21st-century economy,” he says. “It’s a very fixed thing that doesn’t scale easily, especially the real high-quality leathers that are primarily sold to the luxury industry.

“What brands are excited about is having greater control of their supply chain, of having a natural material [that is similar to leather] that is made to order to their specifications,” he continues. For brands, mycelium “is a paradigm shift”.

Hermès has not said how many units of the bag it plans to release, but it will be one of the first mycelium-based handbags manufactured at scale. Others are on their way. Adidas recently announced it will use Mylo, a mycelium leather alternative from Bolt Threads, for a new version of its bestselling Stan Smith sneaker. Stella McCartney has designed a black bustier top and balloon-shaped trousers from the stuff.

Not all leather alternatives are being grown in a lab: food waste is playing its part, too. Paul Smith and Hugo Boss have both released sneakers in Piñatex, a non-woven ﬁbre made from the waste leaves of pineapple plants. Last year, Taiwanese fabric manufacturer Singtex unveiled a jacket made from a combination of recycled coffee grounds and plastic bottles. Orange Fiber, a silk-like twill fabric derived from the leftovers of citrus juice production, has appeared in collections from Salvatore Ferragamo and H&M. And Tommy Hilfiger has produced sneakers made partly from Frumat, a cellulose-based material extracted from apple skin and core waste.

These products have been manufactured in relatively small quantities as part of capsule collections, and it will be some years before any of them could make serious inroads into fashion supply chains.

Despite all the attention lavished on leather alternatives, leather is not the fashion industry’s biggest problem when it comes to environmental and social impact. It is, after all, a byproduct of the meat industry, and while brands should (and often do) take partial responsibility for the huge impacts of cattle farming on the planet, the elimination of leather from fashion’s supply chain would only go so far.

The elimination of polyester and other petroleum-based fabrics could, however, make a significant difference. Fifty-five per cent of textiles produced are polyester, followed by fellow synthetics nylon (5 per cent) and acrylic (2 per cent). Cheap, easy and quick to produce — unlike cotton or leather, brands don’t have to wait for polyester to “grow” — its environmental consequences are enormous. Three hundred and thirty million barrels of oil are used each year to manufacture polyester alone, according to the Ellen MacArthur Foundation, a charity that promotes the circular economy, and it cannot yet be recycled at scale. Worst are polyester’s effects on the ocean: laundered, synthetic fabrics shed microplastic particles that get into waterways and are ingested by aquatic organisms, entering the food chain. The foundation estimates that synthetic fabrics are responsible for more than a third of the primary microplastic pollution found in the ocean.

Because it’s so inexpensive, there has been little incentive for start-ups to develop alternatives. “Polyester is particularly difficult because the price is so low — it’s cheaper than water in some localities,” says Dan Widmaier, co-founder and chief executive of Bolt Threads. “Unless there is regulatory or legislative action, that’s not going to change.”

There are hints of such action coming, albeit not in fashion: an EU-wide ban on single-use plastics such as straws and cutlery takes effect this July.

Most of the innovative materials are being brought to market by the upper echelons of the sector. With less cost pressure, luxury brands can afford to experiment with materials that have not yet achieved economies of scale. And with under-35s driving most of the sector’s growth, there is an imperative for these brands to match their customers’ rapidly shifting values.

“At the end of the day, the reason [brands] don’t use organic cotton or recycled polyester or other more sustainable options is cost,” says Textile Exchange’s Bergkamp. “I hope we get past this obsession of saving a few cents on production, because those few cents have a huge knock-on effect on many, many people and systems in the supply chain.”

These are far from the only innovations remaking the fashion world. In 2015 Google developed a flexible, conductive smart fabric called Jacquard. It has been deployed in a Levi’s denim jacket that enables wearers to respond to calls or navigate a music playlist by brushing their sleeve, and in a Samsonite backpack that offers turn-by-turn directions and notifies users when they’ve received a text message.

Fun as those applications may be, scientists are generally more interested in smart fabrics’ potential to monitor and respond to information such as body temperature, heart rate and blood sugar. They could have a variety of applications across health and sport, as well as in defence, where they could also be used to detect the presence of harmful chemicals. In August 2019, Apple filed a patent for a smartphone-connected conductive fabric that could gather health and fitness data and allow wearers to control workout apps without the aid of a touchscreen. If integrated into sportswear, it could also provide feedback on posture and form when lifting weights or holding a yoga asana.

These sorts of fabric are not sustainable, requiring synthetics such as nylon and components such as batteries and sensors that do not biodegrade easily. But maybe they hold the key to another future, an even more intriguing one: a world in which our clothes aren’t just what we wear, but an integrated part of how we live.

Explore the series
READ MOREHow to create your future home
Hot tubs, houseplants, cottagecore: how the pandemic changed our homes 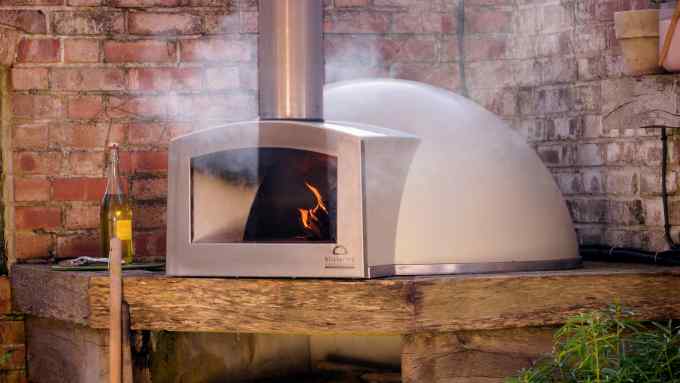