Sign up to myFT Daily Digest to be the first to know about Babson College news.

World growth is flatlining. The OECD has revised down its forecast to just 3 per cent for this year, the same as 2015. The Paris-based body believes last year’s five-year low could be repeated. Governments call forth the entrepreneurs — but they focus too much on start-ups and not enough on scale-ups.

Almost all countries now hail entrepreneurship as vital to the economy. Many give tax breaks and other incentives.

And there is much evidence they are right to do so. Large corporations tend to shed jobs: global banks are one example. EY’s Global Job Creation Survey released on Monday has found that more entrepreneurs than big businesses expect to create jobs. Some 59 per cent of entrepreneurs globally expect to increase their total workforce in the next 12 months.

Just 28 per cent of large corporations are planning to do so, according to EY’s April 2016 Capital Confidence Barometer.

And entrepreneurs are more bullish than last year, when just 47 per cent of those surveyed expected to increase their workforce.

But many young, small businesses are unproductive and never employ anyone but their founder. Very few go from “start-up” to “scale-up”. The Scale-Up Institute defines as a scale-up as a company with at least 10 workers whose employee or turnover growth is more than 20 per cent a year for three years.

Daniel Isenberg, a professor at Babson College in the US, which specialises in entrepreneurship, says policy to create environments that favour entrepreneurs has been tilted “90/10” in favour of start-ups. It now needs to favour scale-ups.

“We have got confused. We have been dazzled by the TV programmes and by the stories of companies that have valuations with lots of zeroes after them. We have lost sight of what entrepreneurship really is,” he says.

Anne-Marie Slaughter
Social entrepreneurs can give the government a lift 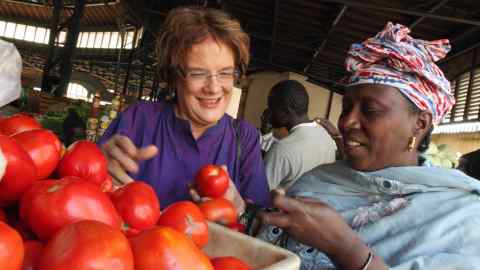 He argues that prioritising young businesses makes no sense. “Apple really took off in 2005. It was a 30-year-old company and a niche player then,” says Mr Isenberg.

Scale-ups, growing quickly with the right help and ambition, would be greatly beneficial to economies. The Scale-Up Institute suggests growing Britain’s number of scale-ups by 1 per cent could create 238,000 jobs and contribute £38bn to the country’s gross value added.

How do you scale up from start-up?

Put your questions to the experts on how to get your business to the next level.

Irene Graham, chief executive of the Scale-Up Institute in the UK, says: “Finance is not the top issue for scaling business. There is an issue of whether there is enough risk capital but it is not the top issue. It is about finding the talent, a skilled workforce, building leadership and getting access to markets.” She says a lot of young people want to work for big brand names but that there are great opportunities in fast-growing businesses.

Ms Graham says the internet had made it easier to expand a business and go global earlier. “We have lowered the barriers to entry a bit. But we need to get skills into the schools and make sure our schooling system is getting behind opportunities that exist,” she adds.

Alongside prominent businesswomen, the European Union has called for more women to start companies. The Kauffman Foundation has assessed 25 years of academic research to answer the questions: who becomes an entrepreneur? And who succeeds as an entrepreneur?

Some trends are clear: founders with previous start-up experience or managerial experience tend to be more successful than those without. Most entrepreneurs have spent time in established firms before they start out, often in a similar field.

That could discriminate against women who are less likely to reach senior positions. However, the number of women worldwide becoming entrepreneurs is growing.

The Global Entrepreneurship Monitor (GEM) report — a joint project between Babson College in the US and the London School of Business — published specialist research in 2015 that looked at women’s participation in entrepreneurial activities. It found there were 7 per cent more women entrepreneurs than in 2012 across the 61 world economies it tracked. The research also showed that although fewer women than men were running new businesses the proportion doing so was growing.

However, while the number of women entrepreneurs appears to be growing, for some that progress is not happening fast enough. Sheryl Sandberg, chief operating officer at Facebook, has put her business’s considerable weight behind efforts tackle this. In May the company launched a programme to advise women in the UK on starting a company.

“We need more women starting businesses — and more small businesses in our economies,” she wrote on Facebook.

Get alerts on Babson College when a new story is published