Red carpet report: Cannes is a triumph of style and substance

In the Olympic Games of dress up, the Cannes Film Festival is an endurance event. Where the Academy Awards or Golden Globes offer only a snapshot of red-carpet style, a quick but glorious burst of exposure in the golden glow of celebrity, the Croisette requires real sartorial stamina — a 12-day marathon during which guests must attend daytime press calls, evening premieres, public speaking events and glittery charity fundraisers, and look good at each and every one.

With so many occasions and times of day to dress for, the week really sorts the wheat from the chaff when it comes to demonstrating genuine personal style. And while there are no shortage of brand-sponsored events and ambassadors on which houses can hang their collections and baubles (to wit: the film festival’s official partner is Kering, the luxury conglomerate that hosts a “Women in Motion” programme supporting women in cinema) the stars that shine in the South of France are those who demonstrate a real authenticity in the way they dress, regardless of the labels they wear.

It’s been especially gratifying this week to see actresses wearing clothes that actually suit them and express something of their personality instead of the homogenous fairy dolls that typically habituate the modern red carpet. Compare Cannes to the curious spectacle of the Met Ball, for example. At the fundraising gala masterminded by US Vogue editor Anna Wintour this month even the most idiosyncratic of talents were dressed in uniform representations of “fashion and technology” that looked mostly to be made out of tin foil. Personality was lost in a mess of peroxide and passionless fashionability.

By contrast, Cannes finds its stars in a more reflective and slowly revealing light. It’s a place of discovery, where stars are born — Brigitte Bardot in 1953, Jane Birkin in 1968, Lea Seydoux in 2013 — and others are granted a second opportunity to shine, like Juliette Binoche in 2010. 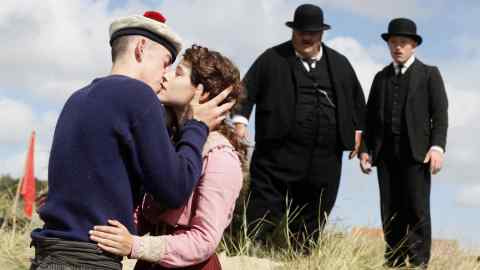 See Julia Roberts for example. The 48-year-old actress is not overtly fashionable, but she consistently dresses in a way that is recognisably her. The pinstripe pantsuit by Givenchy she wore for the press call for Money Monster, smartly recalled the grey, oversized Armani suit she wore to the Golden Globes in 1990 and drew on a look that has quietly become her signature. Later, on the red carpet, she wore Armani Privé. The gown was perfectly appropriate, full, flattering and elegant. Roberts’ killer fashion statement however was her bare feet, a tidy riposte to those gentleman still insisting that heels be worn by women on the Croisette. Style and substance on a red carpet? Only in Cannes.

Susan Sarandon is another actress who has captured much of the media attention this week, and not just in admiration of her tremendous bosom. The 69-year-old actress was lamenting the lack of women-lead scripts. Now 25 years since the release of Thelma & Louise, she suggested the 1991 road movie would most likely be done as “an animation” if it were made today. But Sarandon is no buttoned up political frau; her singularly hot-blooded feminist style in Cannes showcased tuxedos, quirky bright trainers and — ahem — her natural assets. (Sarandon, like Roberts, also has a penchant for pinstriping, one of the season’s significant trends.)

Not everyone at Cannes has been so bang on message, but most have been on brand. The Kering-owned Gucci has had an impressive showing, with everyone from Kirsten Dunst to Charlotte Casiraghi showing up in Alessandro Michele’s diaphanous embroidered gowns. Respect also to Dior, who have been working with actress Marion Cotillard since 2008. The French actress attended the premier of From the Land of the Moon in a long gold metallic gown that combined classicism and cool. More importantly, it didn’t upstage her glorious face or make her look like a pre-roasted fowl. (Both Dior and Gucci opened stores on the Croisette this week. Smart move).

But the big winner here has been Chanel. In addition to boasting the longstanding brand ambassador, 1980s popette and actress Vanessa Paradis as one of the festival jurors, the French house has been dressing the Twilight actress Kristen Stewart and Paradis’s nymphette-like daughter Lily-Rose Depp to promote their respective films. The Paradis parade, mother and daughter, has been a thing of beauty, with each combining feathery black eveningwear, exquisite couture and simple print daywear to make chic look utterly effortless.

Stewart meanwhile has embodied a similarly nonchalant style, albeit with a West Coast accent, by mixing her haute with sneakers and T shirts. Stewart has a withering disdain for media scrutiny and a surly attitude to boot. Even in the frothiest of frocks, she owned her look. And she looked awesome. But we all know the secret of real style is having the personality to match.