Private equity groups have sharply increased the number of investments in so-called buy-and-builds — the bolting together of smaller companies into business empires — as rising competition for assets leads to record-high valuations.

Buy-and-builds have become so popular for private equity groups globally that they have gone from representing 28 per cent of total deals in 2004 to nearly half of all transactions during the first half of this year, says a study from Bain & Company.

From dental businesses to veterinarian clinics, buyout groups were spotting opportunities in fragmented sectors where they can amalgamate companies, quickly cut costs and eventually sell them at a profit, the study revealed.

This comes as private equity groups are increasingly facing competition from each other in a booming market as well as deep-pocketed corporations and new rivals such as family offices and sovereign wealth funds.

By merging small companies, private equity groups can boost sales and access larger financing pools for expansion, according to industry insiders. But merging dissimilar cultures and integrating systems is often a challenge. 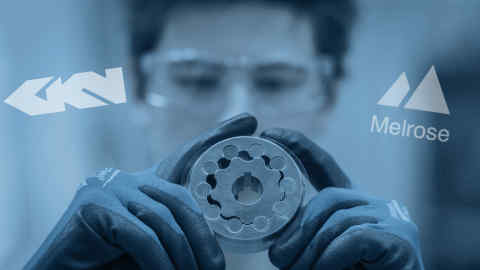 In the US, private equity-owned Advanced Dermatology and Cosmetic Surgery, for instance, has acquired more than 40 smaller businesses.

The €2bn deal delivered seven times return on investment for the buyout fund, a person with direct knowledge of the transaction said.

“One way is to buy a platform and the argument that a corporate can pay more because of synergies is gone. This way PE can compete head on with corporations.”

She added: “If I can buy a platform and add on small companies that tend to be sold at smaller multiple, I can create something bigger that tends to go for a higher multiple.”

But it is not just growing competition for assets that is encouraging private equity groups to bolt companies together. It is also the pressure to deploy cash as the industry raises a record amount — from CVC’s €16bn to Apollo’s $25bn.

“This is a strategy of the times,” added Ms Rainey.