Virgil Abloh’s debut as men’s artistic director of Louis Vuitton was a glorious fashion moment, a show with energy and ideas. It was for spring/summer 2019, but really it was about setting a template for a new era at the brand. I’ll just say it: it was one of the best fashion shows I’ve seen in some time.

Abloh did so with confidence, humour and panache. His first 17 looks were all white, which he intended as a palette cleanser. “Colour is an alluring trick to make something jazzier than it is,” Abloh said, when we met before the show . “What I wanted people to see was the craftsmanship, silhouette, choice of material, detail. I wanted to remove colour from that excitement, to let the eye adjust to see what I’m bringing to all the hype and hysteria.”

The opening look was a white double-breasted suit with two-pleat pants. The cut was roomy, in line with Abloh’s stated desire to address body image in the collection. “I have an effect on people’s whole psyche and their whole self-image, and that’s related to fit,” Abloh said. Maybe that’s were the sense of confidence came: the models were in clothes that were actually pleasurable to wear.

Abloh had concentrated on some purposefully boring looks. It always astonishes me why so few brands do this, instead spending more time designing novelties than concentrating on the basics of fit. The most fantastically boring look Abloh sent out was an oversized pale denim shirt worn with pale denim jeans that pooled over the foot. Equally boring, and equally good, was a black cotton jumpsuit, sitting loose from the body. Real clothes! Such a rarity.

Utility harnesses were acid brights. Shirts had 3D pockets attached. A print of Dorothy from the Wizard of Oz, asleep in a poppy field, was printed on a nylon anorak, a neoprene hoodie or embroidered on to the back of a zip-up jacket. On most models’ feet were sneakers that looked like they’d been made by Louis Vuitton in 1986. Bags were like soft versions of the house’s classic trunk.

The catwalk was one long rainbow outside in the Palais Royal. A band, led by Abloh’s friend Benji B, provided the music. When the designer emerged to take his bow, he was visibly emotional. As he made his way down the catwalk, the audience started to stand, and swarm behind him. He found his way to Kanye West, and they hugged.

Backstage, Abloh posed for photos. Most were with celebrity faces, but then something special happened. In 2009, Abloh and West came with three friends to attend the men’s shows in Paris. Back then, they had no professional connection to the industry, they were just superfans of fashion.

Abloh invited them all to his debut at Louis Vuitton. “It is like the best full circle,” Abloh said. They took their place in front of the cameras, and with their friends, Abloh and West softened. It was like they were kids, once again. 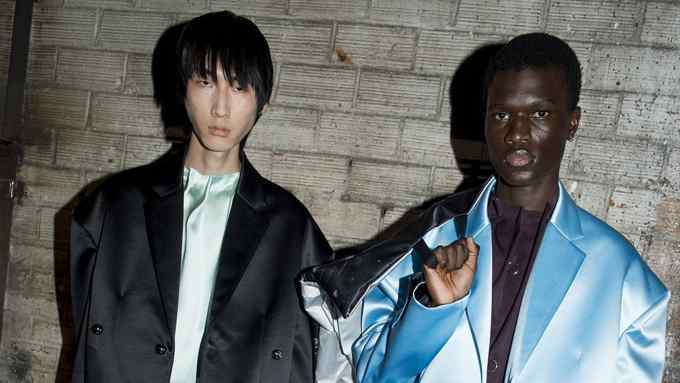