Huawei founder Ren Zhengfei in his own words

Yuan Yang in Shenzhen and Nian Liu in Beijing

Ren Zhengfei, the 74-year-old founder and president of Huawei, appeared before journalists in Shenzhen for a rare and wide-ranging discussion about the Chinese company’s future, its problems over 5G and security, and the arrest of his daughter in Canada.

Below are excerpts from the session, as Mr Ren defended Huawei from its critics.

On espionage and cyber security

“Huawei has served 3bn customers in 30 years in 170 countries, and has a good safety record. There has never been a major problem.

“Huawei is an independent business, we are committed to be on the side of our customers when it comes to cyber security and protecting privacy. We will never harm any nation or individual.

“The Ministry of Foreign Affairs has already clarified, no law in China requires any company to install backdoors. Huawei, and myself, have never received any request from any government to provide [improper] information.

“As Meng’s father, I miss her very much.

“I trust the legal systems of Canada and the United States are open, just, and fair. After all the evidence is made open, we must rely on the decision of the court, and the just verdicts that follow.

“I do not have access to the email correspondences between the US Department of Justice and the Canadian Department of Justice. In the future, if they were to make this evidence public, then I would be able to guess whether it is because Meng is my daughter that she was the first to [be detained] or not.”

“As for our father-daughter relationship, we were close yet not close. The reason we are not close is that when she was little, I joined the military. For 11 months out of a year, I couldn’t be with my kids. For the one month I was back home, they had to go to school and do their homework after dinner. So our relationship during their childhood and teenage years was not close enough.

“The second phase was my time at Huawei. I had to fight for the survival of the company. I spent 16 hours a day in the office and basically had no time for family. So for my three children, I was close to none of my three children. Especially my youngest daughter, I was even more distant from her. So all I can say is, as a father, I feel I owe them.”

Huawei Technologies
Ren Zhengfei: Huawei does not spy for China 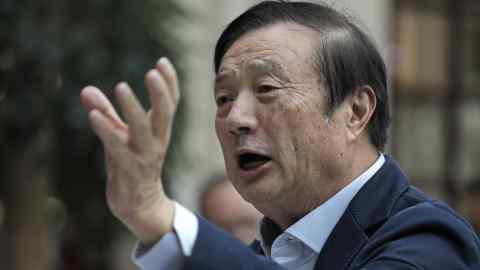 “First, there are some customers who accept Huawei and some who don’t. It’s not a new problem — it’s always been the case.

“When the people who don’t accept us are a few congressmen, or a minority, then because they do not represent the government, we will continue to actively communicate. If it becomes escalated to a government order, we’ll have to stop our sales there.

“One of the major issues surrounding this debate is 5G. If you look at 4G there’s not much debate about it. For those products where there’s no debate as such, we’ll continue to drive sales.

“If a small number of countries decide to no longer buy Huawei products, then we will [shift our focus to] better serve those countries who are fully happy to buy our equipment. We will build our networks to prove we are worth trusting. It’s a fair competition in technology, and I think this is fair.

“The proposal coming from Poland [for Nato countries to ban Huawei] does not represent Nato, because this country carries too little weight. I think it’s really France and Germany who are better positioned to represent the whole of Nato.

“But whether this [proposal] is accepted in the end, I don’t know, and it doesn’t matter so much to us. We are not a public company, we don’t need a beautiful income statement. If some countries don’t buy our products, we can scale down. So long as we can feed ourselves we’ll always have a future.”

On the US-China trade war

“Huawei is not that big. How can a small sesame seed affect a conflict between the two great powers of US and China? Huawei is just a sesame seed, it does not play a role.

“The trade war so far has not affected us in a major way. Our expected growth in 2019 is not greater than 20 per cent.

“Now as you say, the West generally thinks there is ideology printed on to Huawei equipment. That’s as stupid as smashing textile machines during the industrial revolution.

“We only provide equipment. They are run and controlled by operators, not controlled by Huawei. We should not go back to the old days of smashing textile machines.

“First of all, one must believe that we have invested so much in R&D in all those years, we have put in so much effort. We are different to ZTE. We will not have the kinds of problems that ZTE has had.