When it was revealed over the summer that genetically modified salmon was now being sold in Canada, the backlash from anti-GM environmental groups was fierce.

The source of the stink was a two-line disclosure in the quarterly earnings of AquaBounty Technologies, a US biotech company, which stated it had sold a small amount of its AquAdvantage salmon.

Engineered to grow at twice the rate of regular salmon, it is also believed to be the first example of a genetically engineered animal bred and sold for human consumption.

Despite the hostile response from some quarters, Ronald Stotish, chief executive of AquaBounty, says “you almost have to be an optimist to do what I do,” adding that although distributors “were thrilled with the product”, his company appreciates “everyone’s right to choose.” He is, however, adamant that launching the product was the right thing to do.

The main advantage of the salmon’s shorter lifespan is that the fish can be grown in tanks inland, vastly reducing the cost of transportation and the burden on the environment. “Demand for global protein is increasing,” he says. “We have to do a better job and we have to do it efficiently.”

AquaBounty has sold around five tonnes of its product, a tiny fraction of more than 2m tonnes of Atlantic salmon that are typically sold globally every year. Yet some experts believe this small first step could mark the beginning of a new era in genetically modified food production, paving the way for more animal products to come on to a market which has hitherto focused exclusively on crops.

AquaBounty’s salmon, having been examined by regulators for years before it obtained approval to be sold for consumption, has to some extent established a blueprint which others can now copy, argues William Muir, genetics professor at Purdue University in Indiana.

“It was uncharted waters. They didn’t really know how to regulate it,” he says, adding that further applications “will come at speed now AquaBounty has broken the regulatory hurdle.”

One area Professor Muir regards as promising is the creation of genetically modified goats’ milk by scientists at the University of California, Davis, which carries a protein found in human breast milk that could, for example, help protect children in the developing world from bacterial infection.

The road to market has certainly been a long one. AquaBounty won approval to sell in Canada in 2016 after a six-year wait. But obtaining the green light from regulators is only one part of the story. Many consumer and environmental groups remain outright opposed to GM salmon being sold at all. Although the AquAdvantage salmon are all sterile, a common concern is that fertile GM species could escape into the wild and hurt natural species by interbreeding or beating them in the competition for resources.

Many potential customers also remain suspicious of GM products: some 46 per cent of British adults held negative views about GM food products, according to a 2014 YouGov poll, with only 23 per cent in favour.

“This highlights the continuing public rejection of GM food,” says Honor Eldridge, policy analyst at the Soil Association, the UK’s leading organic association. “Ultimately the market — not the views of politicians, GM companies and pro-GM scientists — has always decided the fate of GM crops and food and that will continue,” she says.

Overall political opposition to GM products is also fairly high in Europe. Many countries, notably France and Germany, remain vociferously opposed. Even so, it is difficult to predict how consumers will react to a particular product. In the US, they are sold readily, and China has begun to import GM food, and is developing its own agrichemical industry at the same time as enforcing some provincial bans.

“I’m not sure what drives the acceptance and the non-acceptance,” says Jeremy Sweet, an independent environmental consultant.

Undaunted, AquaBounty is preparing a new production facility in Canada, adding to its existing unit in Panama. The company plans to begin selling to the US market next year, having obtained permission from the FDA in 2015. It has also lodged applications with regulators in Argentina and Brazil, and is eyeing the Chilean and Chinese markets as future regions for expansion.

“There is no human health risk to the product,” says Professor Muir. “I don’t see, scientifically, why it should be held back.” 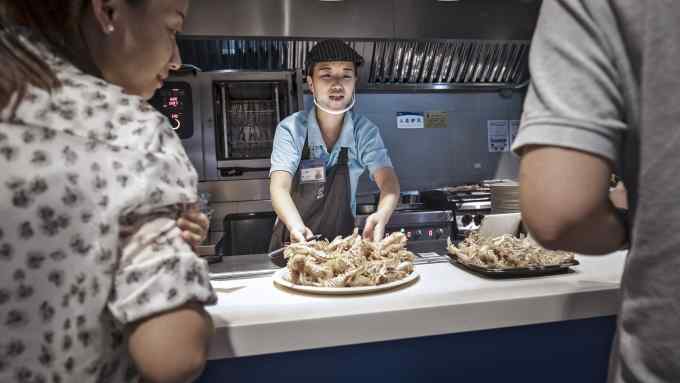