At home with the Santa Claus of time

A colossus of independent watchmaking, Kari Voutilainen has travelled a long way from Lapland to Switzerland

Kari Voutilainen is one of the unarguable greats of contemporary horology, one of the most lauded of the immortals known collectively as “the independents”. His name is uttered in the same breath as Philippe Dufour, Roger Smith and Rexhep Rexhepi: he is a watchmaker whose output of about 70 timepieces a year, no two exactly alike, is in inverse proportion to its cultural significance.

So predictable are his victories at the Grand Prix d’Horlogerie de Genève (GPHG) that I once suggested they might as well just name one of the awards the “Voutilainen Prize” and present it to him every year. So far, eight GPHG trophies and sundry other awards line the walls of his workshop perched on a rocky crag high above Môtiers in Switzerland, a short ride from where he lives in a sprawling, slightly spooky art nouveau villa.

Although he is softly spoken and his personal demeanour is understated, there is a concealed extravagance about Voutilainen. His watches are something of a metaphor for the man, their careful, traditional handmade quality allied to an effervescent creativity that pursues beauty through the combination of unusual techniques. His house, too, is at once historic and unusual, a sort of bourgeois Helvetian Taj Mahal in whose romantic past he revels.

“The original owner’s father ran the watch brand Revue Thommen, and when his son was a young man he sent him here to Môtiers to the best mechanical workshop in Switzerland to learn about mechanics,” he explains. “This young gentleman fell in love with the daughter of a local sparkling-wine producer. They got married and built a house near his father’s watch factory in the Swiss- German part of the country. But his wife did not want to live there, so they moved back here and he used to make the 150km journey to his father’s factory over the rough mountain roads in what were some of the first cars in Switzerland. There is a building in the grounds of the house that was called ‘Hangar Automobile’ on the plans, so they already had cars in 1907 when they built this house. He lived here until 1945 when he passed away.”

Voutilainen acquired it from its third owner and enjoys the flamboyance of the architecture and the unmolested history of the building. “We still have lots of original stuff here, like the furniture, like the carpets and in the living room we even have the original curtains… from 1907!” Pulled back, these curtains frame the view of the park in which the house is set, with its now mature trees shading the gracious sweeping drive.

The joy he takes in the property is heightened by the understanding that it came to him through watchmaking. It belonged to a surgeon for whom his wife worked. “He knew about my watchmaking and what it brought to the village, and when he was going to retire he offered it to us rather than putting it on the open market.” This house is a constant reminder of what the few hundred watches he has made over a long career have brought him.

He spent four years working on a single timepiece

To understand Voutilainen’s rise it is necessary to travel into the frozen north to just 4km south of the Arctic Circle, in Lapland, where Voutilainen was born in 1962. Famous sons of the town of Rovaniemi (population 64,194) are a small but diverse bunch: there is Mr Lordi, he of monster-mask-wearing Eurovision-winning fame; Santa Claus – given that Rovaniemi is his hometown, the Santa Claus Village is open for business every day of the year; and then there is Kari Voutilainen.

Although Voutilainen’s impish smile and the merry twinkle in his eye might have swung him a job as one of Santa’s senior elves, in the event both Finnish heavy rock and festive-gift distribution lost out to watchmaking. “When my parents asked what I would like to do when I was grown up, I said, ‘I don’t know, but I want to work with my hands and to be independent.’”

Revelation came when the family moved to the town of Kemi. “My father had a friend who was a watchmaker, and his watch shop was just across the road. I saw his workshop with these clocks, movements, components and tools, and I was just fascinated. I disassembled an alarm clock – I pulled it apart completely. Of course, I couldn’t put it back together… but I was certainly interested,” he recalls with a melodic sing-song voice. Once school and military service were out of the way, he secured a coveted place at the Finnish watchmaking school in Tapiola, near Helsinki: “Then I went to work in a retail shop in a small town in Lapland.” Unsurprisingly, repairing clocks and pocket watches in rural Finland did not detain him for long. “It’s nice work,” he says respectfully, “but it’s not for me. I wanted to learn something more.”

And it was this quest for knowledge that, in 1988, finally took him to watchmaking school in Switzerland, after which he was snapped up by Michel Parmigiani, then largely known for restoration. There he found himself working with a septuagenarian watchmaker called Charles Henri Meylan who saw the young man’s talent and encouraged him to make a watch of his own.

He made one, then another, and gradually became known for his minute repeaters. Patience is one of the key attributes of a watchmaker, a quality with which Kari is blessed in abundance – between 1996 and 2000, he spent four years working on a single timepiece, a board chronometer with tourbillon constant force escapement. Voutilainen is not a man to be accused of chasing easy money when there is a more recondite route to be taken.

In 1999, he left Parmigiani, but he knew that he could not build a business on minute repeaters alone: “By 2004 or 2005 I realised that I had to make my own movements one day.” In 2011 he presented his own calibre, the Vingt-8, and, orders were taken – even to this day, the majority of Voutilainen watches are sold directly from the factory with Kari himself often hand-delivering the finished piece. As he celebrated his 50th birthday, he could congratulate himself that, at long last, he had realised his childhood ambition to work with his hands and be completely independent.

Or so it seemed.

A few years later, disaster struck. Since the launch of his prize-winning 2007 Observatoire series, for which he transformed a batch of competition-grade Peseux “Observatory” calibres, Voutilainen’s watches had been distinguished by exquisite engine-turned dials that he created himself with a hand guilloche lathe from around 1900. But one of the few processes not carried out under his own roof was the colouring and plating of dials, which he outsourced to another factory. When that suddenly changed ownership and the craftsman with whom Voutilainen had worked there quit, he found himself facing a problem.

Fearing that his hard-won independence would be snatched from him, he found a dial factory that was going bankrupt. “On the first of July 2014, I became owner of a dial factory,” he says. And with that, what had seemed like an existential crisis became a huge turning point for the brand.

He took a conscious decision not to increase production. But what seems commercially counterintuitive makes perfect sense to him: “If I increase production beyond certain limits, I will only become a director and no longer be a real watchmaker working behind the bench, where I am most at home.” A note of steely determination tinges the lilting voice as he adds, “I have taken the decision that I will not give up any quality of life just to pursue bigger profits. I couldn’t survive if I ever lost contact with the roots of my passion.”

This single-mindedness is not to be confused with egotism. Even as one of the greats, he is happy to put his talents at the disposal of others. This year he was part of a three-way collaboration creating a limited edition for Zenith and Phillips’ watch department from 1950s Observatory calibres (on 5 November, the unique niobium-cased watch from this edition sold at auction for £277,484, which will be donated to the Susan G Komen breast cancer foundation), and last year he agreed to become chief executive of Urban Jürgensen, a historic brand founded in Denmark in 1773 that moved to Switzerland in the 1800s, where his daughter Venla works as a watchmaker.

Like her father, she is fiercely independent and says that it was not her family, but school career advice in her early teens that brought her to watchmaking. “It was her decision and her decision alone,” says Voutilainen. Indeed, by the sound of it she found her father’s famous and distinctive name a distraction. “She says that some people treated her differently, but she doesn’t let it bother her,” he says, and it is with considerable pride that he recounts her impressive CV. “She recently turned 23, but she made a watch for the biannual charity auction Only Watch when she was 20. She did an apprenticeship of four years with Vaucher Manufacture Fleurier [a leading maker of movements for prestige brands], and worked for two years at the specialist watch retailer The Hour Glass in Singapore, before coming back to Switzerland last November to join Urban Jürgensen.”

“My son is also interested but he is taking a different path. He’s 27 and he’s studying in Lausanne at the EPFL [École Polytechnique Fédérale de Lausanne]. He’s studying materials. This autumn he’s taking courses on mechanics – he’s interested in watches, but not as a watchmaker. It’s too early to say whether he will enter the industry.”

Kari had just one piece of career’s advice for them. “I have taught both kids that they have to have a profession where Monday morning is the best morning of the week. Friday evening, that’s a plus. But the best moment has to be Monday morning.”

HTSI
This man can find your dream watch 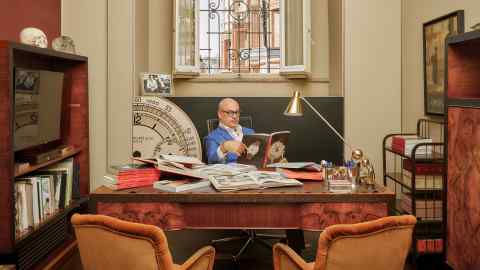 But like many a homegrown philosopher, there are times when he finds it hard to live by his own teachings and often he can’t wait until Monday. It is not unusual to spot him poking around the weekend flea market in the Vallée de Joux, where his patience was recently rewarded with the discovery of another old Observatory competition calibre. I ask if he got it at a good price. “No, the man selling it knew what he had” – and he probably knew who was buying it too.

Nevertheless, Kari is pleased with his latest discovery, seeing beauty and potential beneath the patina of horological history. If there is a man to give new life to these treasures of Switzerland’s watchmaking past, it is Kari Voutilainen. Who knows, he may just have found the incipience of one of his future GPHG winners.