When two battleground US states, Pennsylvania and North Carolina, went to the polls for the 2018 midterm elections, neither state had flipped more than one seat in the House of Representatives in the previous two elections.

After the election, House seats in North Carolina remained 77 per cent Republican, despite a nearly 50 per cent split in the popular vote. None of the state’s 13 seats changed party.

But in Pennsylvania, Democrats won four additional seats to take nine of 18 seats in the House, despite just a few point increase in their share of the popular vote from the previous election, to 55 per cent.

What split the state’s fates before the election? Lawyers in North Carolina attempted to fix the state’s partisan gerrymandering in federal court, citing the US constitution, a case that is still continuing but which experts say they are likely to lose. In Pennsylvania, however, the gerrymandering challenge was filed in state court, citing the state constitution. It was a new strategy, and it won.

In January 2018, the Pennsylvania Supreme Court held that the state’s gerrymandered congressional map violated the state constitution and ordered it redrawn, the first successful legal challenge to partisan gerrymandering that resulted in a new map.

“Pennsylvania voters had already endured three elections where elections were determined before anyone had even voted,” says Mimi McKenzie, legal director of the Public Interest Law Center, a not-for-profit organisation that worked with law firm Arnold & Porter on the Pennsylvania case. “You saw the same 13-to-five hold that Republicans had on US house seats repeated itself in each election, no matter how the votes swung,” she says.

The Pennsylvania constitution provides quite robust protections for voting rights, in many ways broader than those in the US constitution

Gerrymandering is the practice by which partisan lawmakers manipulate the boundaries of voting districts. It is done by consolidating likely opposition party voters into tightly packed districts to make their votes less valuable, or by scattering those voters so thoroughly across districts that their votes are easily outnumbered. This diminishes voter capacity to elect leaders of their choice.

Congressional and state legislative maps are drawn every 10 years, after the US census. They were drawn after the 2010 census, and will be redrawn after 2020. The resulting 2011 Pennsylvania and North Carolina maps were considered two of the most extreme examples of partisan gerrymanders in US history.

Previously, the numerous lawsuits to fix partisan gerrymandering — many continuing — have been high profile, and argued in federal court. But none has resulted in a changed voting map.

“For decades people have been challenging redistricting plans in federal court,” says R Stanton Jones, partner at Arnold & Porter. “They make a huge amount of noise, and are covered extensively by national and international press, but they all lose at the Supreme Court if not before that.”

Rather than pose another US constitutional challenge in federal court, Mr Jones and the lawyers at Arnold & Porter decided to try something new. They looked to Pennsylvania state courts.

State constitutions and courts are increasingly attractive to lawyers looking to make challenges that have been unable to gain traction in federal courts.

“The Pennsylvania constitution provides quite robust protections for voting rights, in many ways broader than those in the US constitution,” explains Mr Jones. The challenge cited the state’s “free and equal elections” clause, among other protections, arguing that gerrymandering was a violation of the state’s constitution. The firm expedited a case, League of Women Voters v Commonwealth of Pennsylvania, to push for a decision in time for the midterm elections. Lawyers provided experts who explained that the map Pennsylvania used for elections would be statistically impossible to draw unless you took into account voters’ political leanings.

Ms McKenzie of the PILC says that the results from the 2018 election show that state-level approaches are viable, and could be replicable by the numerous states with voter protections in their state constitutions, including 12 with charters identical to Pennsylvania’s. “I would really encourage other states around the country to look at their state constitutions and state supreme courts,” she says.

In mid-November 2018, Arnold & Porter filed a new gerrymandering lawsuit in North Carolina, this time challenging the voting map for the State Legislature, the body which will be responsible for drawing the state’s voting maps after the 2020 census.

“In light of the continuing uncertainty about when, if ever, the Supreme Court will identify federal standards for judging the constitutionality of partisan gerrymanders, it is particularly important for voting rights advocates to look to state courts and constitutions in mounting such challenges,” wrote retired Supreme Court Justice John Paul Stevens in a recent review in the New York Review of Books of 51 Imperfect Solutions: States and the making of American constitutional law on state courts by Judge Jeffrey Sutton.

FT Magazine
Battle lines: the fight for a fair vote in America 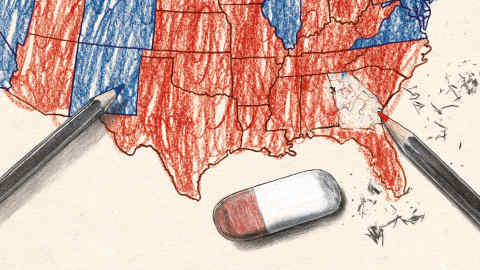 Lawyers at Paul, Weiss joined forces with 33 law firms across the US to challenge the policy of family separation at the border with Mexico, and have remained in the fight to reunite children, some of them infants who cannot yet speak, with their parents.

Elsewhere, a challenge by lawyers at Dechert and the ACLU to a proof of citizenship law in Kansas revealed that a claim that undocumented immigrants voted illegally was unfounded. It also restored voting rights to thousands. Lawyers at Shearman & Sterling and the Center for Justice and Accountability have brought a civil lawsuit against the Assad regime in Syria for the targeted killing of US journalist Marie Colvin.

Brad Karp, chairman of Paul, Weiss, says: “Whenever you see an authority disregard the rule of law, lawyers need to step forward to protect it. If we fail to do so we have failed in our most fundamental role as lawyers.”