Accept & continue
Manage cookies
How To Spend It Style

For more than 50 years, Howell has reigned as the queen of understated fashion. Five leading creatives explain why she’s the perfect fit for all occasions

Sign up to myFT Daily Digest to be the first to know about Style news.

Buying a new piece of clothing can be a fraught experience: the urge to justify even a necessary purchase, the disappointment of poor quality or a bad cut, guilt from the indulgence. Buying a piece of Margaret Howell clothing, however, is notably free of these anguishes. She has become known as a designer you can trust. Her designs do not depreciate in style, value (resale prices are consistently high) or condition. “You don’t wear them out,” Margot Henderson, co-founder of Rochelle Canteen, told me of Howell’s clothes. “You wear them in.”

When Howell founded the brand in 1970, she started with menswear. Following a degree in fine art at Goldsmiths in New Cross, London, and some success making papier-mâché jewellery, Howell turned her hand to making clothes, specifically shirts. “In fact,” she says by email, “my first shirts were for women made from men’s pinstripe shirting, but at that time they were hard to sell. So I made shirts for men with the quality of a bespoke Jermyn Street shirt, but with a soft construction and casual fit.” Later, she developed an unlined linen jacket, a pair of cotton chinos and an oversized raincoat, “gradually building a man’s wardrobe”.

Her first standalone shop opened, with the help of designer and retailer Joseph Ettedgui, in 1977. Serendipitously, the launch coincided with the release of Woody Allen’s Annie Hall. Women flocked to the shop in search of the chinos and waistcoats that Diane Keaton had made so desirable in the film. It was only then that Howell expanded the label to include clothes for women. “Without realising it at the time,” she says, “I was connecting with a set of aesthetic and practical values that would become my style.”

By the end of the 1970s, Howell was stocked in stores around the world, and her fame was growing. When Jack Nicholson bought a corduroy windcheater jacket from LA menswear shop Maxfield Bleu, it led to a request from Stanley Kubrick’s production company for a dozen replica jackets for the filming of The Shining – Nicholson so loved the design that he wanted to wear it to play the starring role of the unhinged caretaker, Jack Torrance. In 2012, Howell released an updated version of the now-iconic jacket, which is still available in shades of black and brown (£575).

The label has since grown to include spaces in Ireland, Paris, Florence and 120 retail outlets in Japan, where her designs are beloved for their British fabrics and simple aesthetic. Michael Hamilton, co-owner of Belfast mens-wear store The Bureau, remembers encountering the brand for the first time at a trade fair in Paris in the early 1990s. What drew him to her clothes? “The unstructured collars, the high stitch count on the shirting, and all married with ‘Made in England’ manufacturing,” he says. “Back in the early ’90s these were very unusual qualities to find in the UK. Thirty years later, they are even more rare – or possibly unique to Margaret Howell.”

It’s this prizing of heritage fabrics, well-executed designs and timeless style that have made her the go-to for creatives around the world.

“We love Margaret Howell!” says Margot Henderson, sitting with her husband Fergus on a video call from their sunny kitchen in south London. It’s perhaps unsurprising that the chefs and founders of pioneering London restaurants Rochelle Canteen (Margot) and St John (Fergus) are fans of Howell’s pared-back, utilitarian aesthetic, given that their own restaurants adhere to similar principles: both are mostly free from artwork, music and flowers, allowing the plates of refined British fare – St John’s iconic dish is roast bone marrow and parsley salad – to be the sole focus.

Fergus recalls buying his first piece of Margaret Howell at the age of 20 when he left London to work for the designer Massimo Vignelli in New York. “I felt that I should have some smart clothes,” he says. “So I went to Margaret Howell and got a fantastic blue cotton suit, and a big raincoat and some other bits and pieces.” The suit ended up causing some tension – Fergus’s father, who was accompanying him, wanted him to wear another more formal suit that he had packed. He never wore it. “I wore the Margaret Howell one every day,” he recalls.

Margot is dressed in head-to-toe Howell as we speak. The blue men’s shirt is a hand-me-down from her mother-in-law. “Margaret’s clothes are so wearable,” she says. “They’re timeless and have a sense of permanence.” She notes that she bought two of the same Howell dresses because she knew she would wear them so much. “It’s like a uniform. You can wear it in the garden, cooking, going to the shops. It’s very practical.”

The admiration apparently goes both ways. Margaret eats at St John and Rochelle Canteen, and has used Margot and Melanie Arnold’s catering company, Arnold & Henderson, for events at her stores. Margot recalls the menu as “just a big bowl of brandade – salt cod pâté – with toast. It was all so simple and perfect. You didn’t need to do lots of fancy, crazy stuff, just something that spoke to her simplicity.”

For Matt Gibberd, the strength of the brand is in the simplicity of the clothes. “It’s always a really lovely material treated with respect, and it doesn’t need to be more complicated than that,” he says. “I’m a bit of a classicist in the way I dress and I love a simple workwear jacket or a T-shirt with the right cut. That’s actually quite difficult to achieve.”

It’s always a really lovely material treated with respect, and it doesn’t need to be more complicated than that

He got to know Howell’s designs in 2007, when she held an exhibition on the modernist architect John Penn in her Wigmore Street shop. “We [Matt and his business partner, Albert Hill] thought it was amazing that a fashion designer had chosen to run this exhibition about a pretty obscure British modernist architect. So we went along and it was incredibly chic,” he recalls. “The food was just this enormous pâté with some cornichons on the side and you could just dig in. That summarises, for me, her approach generally: choosing the best ingredients and treating them with respect. To my mind it is that great modernist principle: the truth is in the materials.”

Today, he enjoys browsing through Howell’s Wigmore Street shop for clothing and for her curation of homewares and books. “I might buy a workwear jacket or a jumper, or it might as easily be some obscure architecture book or an Ercol chair.”

As a self-professed soul boy living in 1980s London, John Akomfrah first came across Howell’s clothes at Browns, on South Molton Street – at that time a haven for up-and-coming musicians and artists. He was drawn to her straightforward, artisanal aesthetic. “I loved its lack of bombast, its reformulated Englishness, its disavowal of ostentation,” he says. “The way in which it’s rooted in what feels seemingly practical and yet at the same time is very stylish.”

The launch of her everyday, lower-priced MHL line in 2003 cemented Akomfrah’s interest. “Suddenly the ethical, aesthetic and political project of Margaret Howell all seemed to come together. Her interest in workwear was thrown to the front but it was married with – relatively speaking – questions of affordability and pricing.”

Over the years Akomfrah has collected Howell trousers and shirts, recalling one shirt in particular with an asymmetrical collar. Coming from the generation after Howell, he feels drawn to her designs partly because he recognises her references. “A number of her journeyings into the past are vaguely familiar to me,” he says. “You almost need an encyclopedia of postwar popular-sartorial history in front of you. Once you’ve got that, you can see her forays: the moves she makes and, more importantly, the departures. There’s this faint recognition of an elsewhere that the works allude to, but which never detracts from their presentness. It’s that joy of improvisation and conservation which characterises her work that I love enormously, because I have affinities with that way of making things.”

At Home with the FT
Margaret Howell, the British clothes designer who is big in Japan 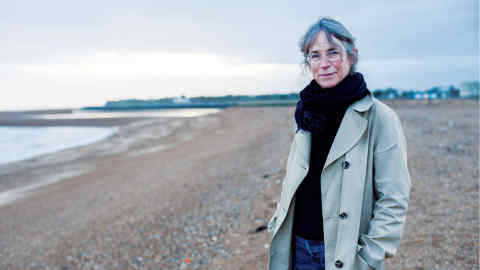 He recalls taking a friend to one of her shops, who then commented that the clothes felt old-fashioned. “I said no –that’s a mistake. That’s what she’s playing with: nothing ever looked like that in the past. They may have affinities, or sympathies, but they are definitely not bound to the past. Because you can see where they’ve come from, you can see how far they’ve travelled to be in your present, and therefore there’s always something utopian, always forward-looking about her work. I find that remarkable.”

The creative director of tech activism agency A Vibe Called Tech, Lewis Dalton Gilbert remembers seeing Howell’s clothes for the first time when he worked in north-London fashion boutique Diverse, which still stocks her collections. “One of my colleagues was so obsessed with Margaret Howell that we would affectionately call him Mags,” he laughs. “When I first went into the shop, it wasn’t the brand I thought I would buy into. I was 18, I was at art school, so I was like, ‘Raf Simons!’ But as time goes on, you need staples, you need contemporary classics.” The first thing he bought from the brand was a plain white shirt. “I’ve had this shirt for over 10 years and I still wear it all the time.”

Now he wears Howell to meetings with clients. “I meet so many different people with what I do. And I always feel comfortable around all age demographics [in Margaret Howell],” he says. “You feel like your best self. You feel comfortable, you feel like you’ve made an effort.” He attributes part of this comfort to the fabrics. “When you work in a creative industry, people take note of that. People notice quality first, as opposed to what brand it is. I think people really value how well-made things are. Margaret ticks all of those boxes.”