Carlos Ghosn blames charges on ‘plot and treason’ by Nissan

Kana Inagaki in Tokyo and Edward White in Taipei

Carlos Ghosn said the charges of financial misconduct against him were a result of “plot and treason” by Nissan executives who were trying to block his plan for deeper integration with France’s Renault.

In his first interview since his November 19 arrest in Tokyo, the ousted chairman of Nissan told Nikkei Asian Review that “there was a plan to integrate” the alliance partners including Mitsubishi Motors under a holding company structure.

The plan was also shared with Hiroto Saikawa, the chief executive of Nissan, in September, according to Mr Ghosn.

Mr Saikawa has strongly denied speculation that Mr Ghosn’s downfall was a result of a corporate coup d’état that stemmed from Nissan’s fears of a full merger with its French partner, which owns a 43 per cent voting stake in the Japanese company. Nissan holds a 15 per cent stake in the French group with no voting rights.

On Thursday, Mr Saikawa is expected to hold his first face-to-face meeting with Renault’s new chairman Jean-Dominique Senard on the sidelines of a regular alliance meeting in Amsterdam as the carmakers seek to rebuild ties following the ousting of Mr Ghosn.

Nissan and Renault have also hired the French auditor Mazars to look into potential misconduct within the alliance, according to people close to the companies, as they launch a joint probe led by their auditing teams.

Mr Ghosn has denied charges made by Tokyo prosecutors that he falsified his pay in Nissan’s financial documents and made payments through a Nissan subsidiary to a Saudi businessman who helped to address his trading losses in the wake of the financial crisis in 2008.

Last week, he resigned as chairman and chief executive of Renault after the Tokyo court repeatedly rejected his request for bail.

“I won’t flee, I will defend [myself],” Mr Ghosn said in the 20-minute interview, which was conducted at the Tokyo Detention House where he has been held for more than two months.

“All the evidence is with Nissan, and Nissan forbids all employees to talk to me.”

In a statement on Wednesday, Nissan reiterated that its own internal investigation uncovered “substantial and convincing evidence of misconduct” that led to Mr Ghosn’s ousting. The company declined to comment on Mr Ghosn’s plans for integration with Renault.

In response to criticism that his 20-year reign at Nissan was a “dictatorship”, Mr Ghosn pointed to his efforts to revive the Japanese group from the brink of bankruptcy in 1999.

“People translated strong leadership to dictator to distort reality” for the “purpose of getting rid of me”, he said. 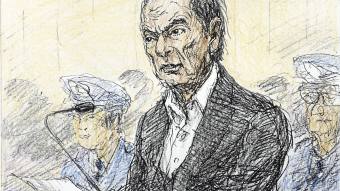