The indomitable matriarch of luxury fashion has sold the family business. But don’t you dare call it Korsace

Inside 12 Via Gesù, the ornate Renaissance palazzo that houses the operations of the Versace fashion dynasty, preparations are under way for the label’s Autumn/Winter 2019 men’s show. Clothes are being edited into “looks” of acidic colours and rich patterns.

Well she might be. This Versace catwalk show is the first since the label was acquired by Capri Holdings, formerly Michael Kors Holdings Limited, on December 31 2018. The price was €1.83bn, approximately £1.66bn on the date of announcement, and the deal followed months — years even — of speculation about the sale of this gaudy jewel of Italian fashion. The house was steeled for an initial public offering in the autumn of 1997, but when the founder, Gianni Versace, was murdered in July of that year plans were shelved indefinitely as Versace — family and business — figured a way to cope with their loss. Donatella Versace has led the house creatively since then, through various twists and turns of fate, favour and finances. It has now hit pay dirt.

“Honestly, I didn’t have any intention to sell the company,” she states, gesturing. Her hand trails a pink diamond the size of a quail’s egg: incidentally, the Versace family owned 80 per cent of the house at the time of this sale. She continues, “Because the company was going finally up, up, up.”

Indeed — the brand returned to profit in 2017, posting earnings of €15m against revenues of about €680m. In the wake of a “Tribute” collection mining the house’s archives, shown in September 2017, Versace womenswear sales have doubled according to sources close to the brand. John Idol of Capri Holdings confirms that Versace has performed “very strongly”, with double-digit growth in 2018.

“At one point I said, why would we sell now?” Versace posits, hypothetically. “You know, I have no patience in general — but everybody, as well, said, why wait? I mean this is the moment. This occasion comes once in life. I mean it was not only [Capri Holdings] — other people, all together, came to me . . . ” Versace leans in, conspiratorially. “For years, nobody looks at me — then the biggest groups, the biggest fashion groups, they all came here offering to buy the company! It was gratifying, in a way. But the person who really struck me — the way he thinks, the intelligence — was John Idol.”

How does she feel about the “Korsace” epithet bandied about in the wake of the acquisition announcement? On social media, many have questioned if Versace has sold its soul. “I was so upset to read some comments about it,” Versace demurs. “I don’t know why people thought Versace is becoming like Michael Kors? A medium, lower line. I mean with all due respect to Michael Kors . . . ” she pauses. “The thing that is very important for us to underline is that Versace will always be a luxury brand. We don’t produce one item outside of Italy. I’m very proud to say that. This is a strategy. Our sneakers are amazing — our Chain Reaction sneakers are amazing. I don’t wear sneakers,” Donatella laughs, “but, they are done in Italy. They’re not done in China, or anywhere else. At the moment they’re very successful: if I made those sneakers in another country we could do 15,000 more. I don’t care.”

Footwear — and accessories generally — is a category that has been sketched out for growth in Versace’s stratagem. Ready-to-wear makes up about 54 per cent of the house’s sales, according to the brand’s chief executive Jonathan Akeroyd — a fact Donatella Versace is also proud of. The split in sales between mens and women’s fashion is near-equal. Akeroyd says: “Generally speaking, the expectation would be for men’s to be weighted around some 20 per cent [of sales]. Actually, it’s 50 per cent. It’s a position of strength.”

The menswear she has created for AW19 (being shown this weekend) is strong in look: a forceful statement, strident in colour, wide in shoulder, set to a soundtrack of operatic arias by Maria Callas, and the music of the American drag queen RuPaul. “It’s a collection for the guy who doesn’t look at his abs,” Versace says — meaning a shift away from the hulked-up Himbo that was, for a while, synonymous with the label.

The Versace look has always been specific, distinct. It sells plenty of slick suiting to businessmen — but it’s for businessmen who want a more emphatic shape, a defined waist.

We don’t produce one item outside of Italy. I’m very proud to say that. This is a strategy

Who is the Versace client? For Donatella, he doesn’t exist. “I know there is not a loyal client,” she states. “There isn’t, at all. Fashion doesn’t have a loyal client. There is somebody who will buy a pair of Gucci or a pair of Balenciaga shoes, and mix with Versace jeans or a Versace leather jacket. I like that. Because it makes you more creative. To work on the archive but make it contemporary. It’s not the suit, it’s not the beautiful evening dress only, it’s about that beautiful evening dress you are well known for becoming a T-shirt.” Incidentally, this collection features just that, a T-shirt riffing on “That Dress”, the Liz Hurley safety-pin number that distracted everyone from just about everything else at the Four Weddings and a Funeral premiere in 1994.

But enough about the past: Donatella Versace is ebullient about the future. After stepping on to the pre-collection carousel with a show last December staged in New York’s stock exchange (Versace loves a bit of symbolism), the house plans to continue to participate in the “Around the World in 80 Looks” ethos of globe-trotting pre-collection fashion shows.

Next up is China. “Because it’s a huge market for us,” she states. Akeroyd says that Asia accounts for 46 per cent of Versace’s overall business: Gianni Versace opened his first store in China in 1983, well ahead of the influx of western luxury brands. “But if we go to China, I want to go to the Forbidden City,” Donatella says. “That, or nothing. I know it’s commercial, but no one has gone there before. Never a fashion show.”

Versace is currently working on gowns for the Academy Awards — but she remains tight-lipped, relatively, about the specifics of what will be worn by who. “We don’t pay them, by the way,” she states. “Ten years ago nobody cared about the red carpet and we were doing that. We were all over the red carpet . . . Now everybody is on top of the actress and giving money to the stylist. This is ridiculous.” Versace’s red carpet dressing, famously, triggered Google to create its “image search” option, promoted by the frantic googling of the actress Jennifer Lopez in a Versace gown. “That’s a Versace image, the power of that image,” Donatella Versace says, with pride. That power evidently pays.

Explore the series
READ MORE
London menswear AW19 has begun. But does it still matter? 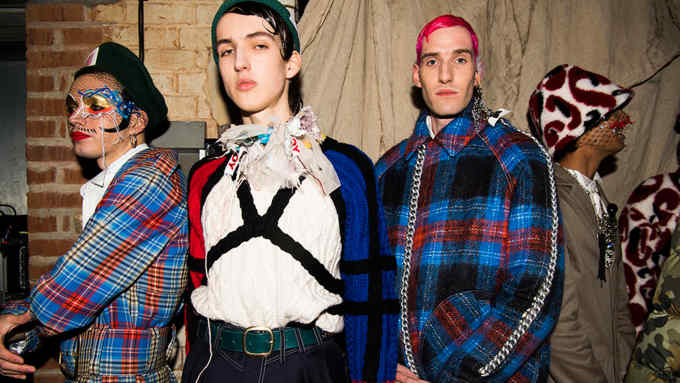