Plus: 100 women influential in the UK’s engineering sector

You have to get the mothers onside, says Nick Baveystock, if more women are to become engineers. Studies show the main influence on a child’s choice of career is their primary caregiver, says the Institution of Civil Engineers director-general.

“Almost always it’s mum. Engineers can go into schools to win children over but if mothers are not convinced, it won’t work.”

This was not a problem for April Shackley, whose mother had been a civil engineer and encouraged her to study the subject at university. Good at maths and physics, and wondering what career to pursue, she saw this as a sensible idea.

At university she switched to architectural engineering and then worked as a structural engineer, before joining Whitby Wood as a senior engineer.

“The great thing about our job is seeing your work in reality and realising you’re contributing to society,” says Ms Shackley, who leads a team of three and designs the structural elements on building projects.

You don’t spend your entire life in a pair of wellington boots watching concrete being poured in the rain. This is about making the world a better place

She chooses materials, calculates sizing, and works with architects to construct a building. This dynamic can be testing but she enjoys it. “There’s a thing between architects and engineers — both think the other one is always wrong. I was interested in architecture so I like working with them,” she says.

Engineering remains a male-dominated field, particularly in the UK. It has the lowest percentage of female engineers in Europe, with women occupying 12 per cent of engineering jobs.

Search “engineer” images online and you will see pictures of people in yellow jackets and hard hats on construction sites. However, says Mr Baveystock: “You don’t spend your entire life in a pair of wellington boots watching concrete being poured in the rain. The reality is most people are sitting in offices or travelling the world solving problems.

“This is about making the world a better place,” he says, pointing to the increasing focus on sustainability.

Ms Shackley visits schools to talk about engineering and has worked with a charity, Scale Rule, which aims to involve more children from low-income backgrounds. “Most children know what an architect is but they don’t know what an engineer is,” she says.

Percentage of engineering jobs held by women in the UK. The country has the lowest percentage of female engineers in Europe

Mr Baveystock says companies should work with teachers to create lesson plans that focus on problem-solving. Showing children how they can apply learning to real jobs is important, he adds.

Hilary Leevers, chief executive of EngineeringUK, a lobby group, says the introduction of mandatory gender pay gap reporting for big employers spurred companies to review their efforts to attract and retain women. “All of a sudden we stopped having to make the case — all that energy can now be put into making a difference.”

Perhaps frustratingly for a profession that prizes problem-solving, there is not a single, easy solution.

“We don’t really know how to crack it. There has been good local success but nothing that looks scalable,” says Ms Leevers, who is studying how other countries have redressed gender imbalances, including in the Middle East, where some countries report a steady increase in the proportion of female engineering students.

Chloé Clair, chief technical officer at Vinci Construction and the first woman to join the company’s executive committee, was encouraged into engineering as a student in her native France.

“I was lucky that I was good at maths and the French system pushes you into engineering,” says Ms Clair. Now she loves it: “I learn every day, I have freedom and the scope is so large.”

Ms Clair has held several operational roles internationally, including in San Francisco, Miami, Cyprus and Thailand. There were cultural differences to adapt to — the US, for example, being “always super-professional, just a little too much, a bit cold”.

While she sometimes felt too young, she never felt being a woman was a problem, aside from one time negotiating prices in the Caribbean.

The problems for women come later, says Ms Clair. “In my company the number of women managers is the same as 10 years ago. It has not changed. It’s inclusive but the right actions are not taken.”

In their own words: advice to young women in engineering

Chloé Clair
“Never stay in process roles, even if you like it. You have to be on the field. If not you will stay in functional roles”

Hilary Leevers
“You will be in a minority, most likely. Some thrive in this environment but if you don’t, build a network around you, either outside or inside the organisation. Don’t underestimate how powerful that can be”

April Shackley
“Don’t be worried about not knowing everything and ask for help when you need it. It took me a long time to enjoy my job. I had no confidence, and I now see younger girls who are exactly the same”

Companies should appoint more women as leaders, she says, because they then influence decisions that affect female colleagues throughout the organisation.

Women returning from maternity leave, she suggests, should be given a bonus that is more than only pro rata. It is already hard enough for returning mothers, she argues — offering a significant raise demonstrates how happy the company is to have them back.

“If you don’t have women at the top then they just don’t have a clue — they think maternity leave is a form of holiday, that when we come back everything is open, red carpet, no problem.”

Changing the perceptions of male colleagues is important, but she also points to lack of confidence as a barrier.

Ms Shackley admits to sometimes feeling her opinion is not always valued and warns that less-confident engineers can be pressed into agreeing to something they think is wrong.

Contractors might be fixing reinforcements with concrete, for example, and on-site engineers must step in if something looks incorrect. “The concrete’s there, they want to pour it, and they don’t want to lose money.” 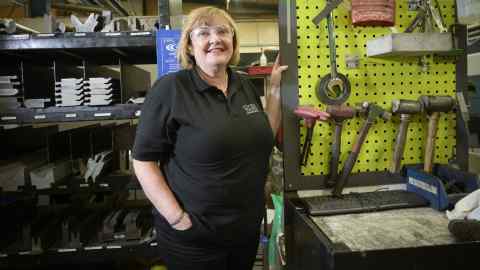 Women aspiring to leadership jobs should prioritise operational roles, says Ms Clair. “I can be confident and assertive because I’ve been on site and I know the problems.”

Retaining women also needs to be a priority for the sector, she says.

“Companies are bending over backwards to recruit women,” agrees Mr Baveystock, but they need to do more to ensure returning women have an easier route back into the workplace.

He says best practice from other industries can be transferred to engineering, such as flexible working, and a more family-friendly approach to business meetings. “Don’t say that in order to be successful you have to be floating around between 7 and 9 o’clock at night because it isn’t true.”

Ms Shackley says she has seen too many women have children and then “give up on their careers.” One of these was her own mother, who after having three children did not return to her job as a civil engineer and became a teacher instead.

It was a decision that Ms Shackley says is tinged with regret. Her mother had been the only woman on her course at university and one of a very few in the office.

“When I passed my chartership this year she said she was really proud. She wished she hadn’t given it all up.”

The policies, practices and strategies of the engineering sector affect every area of daily life and those of families, friends and colleagues.

Yet women are strangely absent from the sector — whether in the boardroom or on site. As businesses and organisations try to redress this, we publish a list that highlights the ways in which women are influencing the present and future roles of female engineering colleagues.

The list is presented in alphabetical order, except for the top 10, who were selected and then ranked by a judging panel. The criteria for inclusion and ranking included influence within an organisation or team, respect within the field and leadership. The list was compiled by research partner Inclusive Boards, an executive search group that helps organisations diversify their workforces.