Negative rates add to list of pressures on German bankers

Each autumn, the German newspaper Handelsblatt hosts a conference attended by the great and good of German finance, entitled “Banking in Upheaval”. Almost every year, the participants joke that the title has never been so apt.

This year, the title really was fitting. Germany’s two biggest banks, Deutsche Bank and Commerzbank, are in the throes of painful restructurings. Two of its regional banks with big maritime loan books are struggling with the fallout from the crisis in the shipping industry. The normally stable world of Germany’s savings and co-operative banks — which account for the bulk of German retail banking — has been upended by the European Central Bank’s ultra-loose monetary policy. Meanwhile, everyone is battling to get to grips with the chances and problems posed by digitalisation and the ever tightening pressures of the post-crisis wave of regulation.

By far the longest shadow is cast by the woes of Deutsche. The bank has long been a crucial cog in global capital markets and was one of the main pillars of the postwar German economy. After posting a €6.8bn loss for 2015, however, it has had a tumultuous 2016. Concerns over its comparatively weak capital position have been compounded by fears of potentially expensive settlements for past misdemeanours.

In February, Deutsche’s shares were at the centre of a wild sell-off in financial stocks prompted by fears that it might not be able to pay coupons on some of its hybrid capital. In September, the bank was plunged into deeper turmoil by news that the US justice department had demanded $14bn to resolve an investigation into alleged mis-selling of residential mortgage-backed securities in the run-up to the financial crisis.

Deutsche has repeatedly insisted that it has no intention of settling for anywhere close to this figure. Markets, however, were sufficiently unnerved that, at the height of the panic, the German finance ministry was forced to deny that Berlin was working on a rescue plan.

The turbulence surrounding Deutsche has made its efforts to restructure itself far harder and many observers expect that the bank’s high command, led by chief executive John Cryan, will have to rethink its plan once more.

The problems facing Germany’s savings banks — whose business model has been upended by the ECB’s decision to slash interest rates to historic lows and into negative territory — are less dramatic. Yet the consequences could well be profound. Germany’s savings banks are highly dependent on net interest income — the difference between the amount they pay customers for deposits and what borrowers pay them for loans — for the bulk of their earnings. As the ECB has pushed rates ever lower, this income stream has been squeezed, compounding the competitive pressures that the whole German banking system already suffers as a result of being the most fragmented in the eurozone.

“It’s as if you woke up tomorrow and found that water had started flowing uphill. On the first day it would still be funny but our systems are not set up to cope with it. Sluice-gates wouldn’t work. Reservoirs would overflow,” says Georg Fahrenschon, head of the German savings banks association. “And that’s how we experience [negative rates]. When the interest effect is removed, or even becomes a punishment, then many systems do not work and we are sending a dangerous signal.”

World
Germany’s coffers are overflowing but optimism is wearing thin 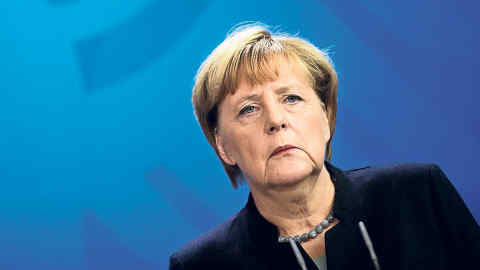 In response to the pressures — which weigh on the likes of Deutsche and Commerzbank, and Germany’s regional banks — some lenders have started to pass negative interest rates on to big corporate customers, as well as institutional clients such as pension funds. Two tiny co-operative banks have said that they will charge negative rates to private clients with large balances. Mr Fahrenschon has acknowledged that although they are doing everything they can to avoid it, if rates do not rise, Germany’s savings banks may have to take similar steps — a drastic move in a country where saving is prized as a virtue.

Most banks are doing all that they can to avoid this course of action. Those that can have increased lending volumes. Others have started to charge fees for services that they previously provided free of charge. Some branch networks are being scaled back.

Many observers, nonetheless, think more radical steps will be needed. Hans-Walter Peters, a partner at Berenberg, and head of the association of Germany’s private commercial banks, said this year that the country’s “three pillar” banking system — composed of savings and regional banks, co-operative banks and bigger commercial lenders — might need structural change.

Martin Hellmich, professor at the Frankfurt School of Finance & Management, agrees. “Branches will have to be closed. But there will also have to be further consolidation. Not just on a regional level, but also across borders.”