The Treasury is in talks with the UK’s largest banks about an industry-wide plan to help tackle the tens of billions of pounds of bad debts expected under the government’s light-touch coronavirus “bounce back” loans scheme.

More than 1m of the UK’s smallest companies have borrowed £33bn in just two months under the bounce back loan scheme (BBLS), which offers state-guaranteed, six-year facilities of up to £50,000 with only minimal checks on the borrower’s ability to repay.

The scheme was designed by the Treasury to allow banks to lend quickly to businesses struggling to survive lockdown, but bankers and officials predict many loans will never be repaid.

The Office for Budget Responsibility said this month that up to 40 per cent of these loans could default, with £53bn assumed to be lent in the six months the scheme will run. Based on loss per defaulted loan assumptions, this would cost the taxpayer £16bn.

One option being discussed by officials and bankers is whether problematic loans could be extended for as long as a decade to give struggling borrowers more time to repay. But banks are pushing back strongly against long extensions, wary of the greater work and risk.

Part of the talks are around a common code of conduct to deal with bounce back borrowers, according to three people close to the discussions, which could give terms of reference on how to treat those struggling to repay. This could include guidance on when and how to extend terms automatically, they added.

Bankers are also in discussions over a standardised, automated approach to dealing with defaults, with measures to help borrowers rolled out across all lenders to ensure consistency and efficiency. Such a system would insulate bankers from a “PR disaster” if they have to pursue thousands of small businesses struggling to repay.

Bankers argue that due to the influx of new borrowers and the unprecedented type of debt on offer, this would be impossible without hiring hundreds of restructuring and collection specialists, something they cannot afford with earnings squeezed by ultra-low interest rates and tens of billions in loan-loss provisions piling up.

Chancellor Rishi Sunak has already categorically ruled out the idea of state bailouts, saying converting defaulted debt into equity stakes in bankrupt companies is not something the government should get into the “habit” of doing.

To introduce an automated system for BBLS, Financial Conduct Authority rules would have to be temporarily or selectively relaxed. Executives also worry about future accusations that they mis-sold loans to companies they knew were unlikely to repay.

ExplainerUK business & economy
How will the UK’s ‘bounce back’ loans work? 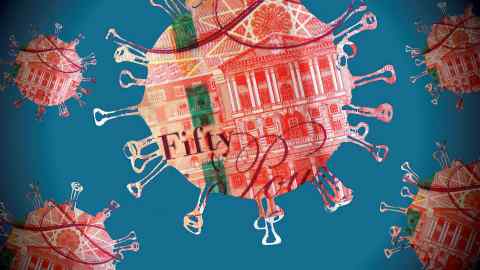 Treasury officials also want to avoid the sort of banking scandal that resulted from the last financial crash, said one person close to the talks, who said that a government-sanctioned approach could help.

Another issue being debated is the fact that banks need to first attempt to get money back from defaulted lenders before they can trigger the government guarantee.

The Treasury is keen to keep the banks as the primary relationship with the borrower, said one person familiar with the talks, rather than take a more centralised approach such as a government-led “bad bank” to take ownership of the problem debt.

Bounce back loans will continue being issued until November 4 — although the Treasury could extend the scheme — and there is no interest to pay on the loans for a year. The problem, however, is building up as the volume of loans increases.

Mr Sunak is concerned that if he gives any hint that the government will propose more generous repayment terms for the loans — or consider writing them off as grants — it is likely to lead to even more loans being opportunistically taken out, according to people close to the chancellor.

The government has told bankers as a result it does not want to take a public position on the issue, they said.

But one senior UK banker said: “We have told the government that they have to automate and set rules. We need them to come out and say very very soon how they are going to behave on their guarantee.”

“If I get a default all I want to do is put it to the government and not chase the client myself,” the person added. “It is their money after all, they told us to lend it without doing the normal checks.”