Start a 4-week trial
Your Questions  Next Act

Will I have to go back to work after my divorce?

I am in the process of getting divorced. I gave up a successful career when my first child was born and so have now not worked for 15 years. I am nervous about returning to the workplace after such a long gap. Is this taken into account in divorce settlements?

Jo Edwards, a partner and head of family at London firm Forsters, says it is common in the happy years of a marriage for decisions to be made that may financially disadvantage one person in the couple if the marriage breaks down. Giving up work to raise children is the most obvious example.

There are differing approaches to maintenance within the UK. In Scotland there is a stronger presumption of financial independence, and it is unlikely you would receive any more than three years’ spousal maintenance. In England and Wales, however, the court will consider needs as its starting point. If you are unable to support yourself financially after divorce, you will probably be entitled to spousal maintenance. The questions are — how much and for how long?

The amount of spousal maintenance is determined by your needs — not just basic everyday costs of living, but your needs interpreted generously, reflective of the marital standard of living. However, once needs have been met, that tends to be the end of it. Although some individuals have been successful in persuading the court to “compensate” them for loss of a successful career, that is no longer the approach. Furthermore, the court rejected a recent attempt by a wife to argue that a husband’s very high income built up during the marriage was a matrimonial asset which should be shared.

When deciding the level of maintenance, your earning capacity will be taken into account. However, the court will take a realistic view of how long it may take to rebuild some level of earning capacity, and the likely limits to it after years out of the workplace. The court has said that once a child is seven years old, there is an expectation that a stay-at-home parent will work at least part-time and make a contribution towards their outgoings.

Regarding the duration of spousal maintenance, so-called “meal tickets for life” are largely a feature of the past. The trend is for spouses to receive maintenance for a term, the length of which will depend on factors including the spouses’ ages, the age of any children, the level of needs and how quickly and at what level an earning capacity can be built up.

Thought will need to be given as to how the recipient of maintenance can achieve financial independence at the end of the term — whether through the building up of their earning capacity, the provision of surplus capital from which to derive an income or a pension sharing order.

Q&AYour Questions
Why is London the ‘divorce capital of the world’? 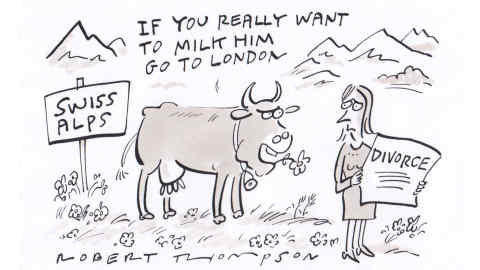 Where there are young children, it would be usual to have a safety valve of leaving spousal maintenance claims open until the youngest has finished university. If the recipient of maintenance remarries, the maintenance will stop; ditto if the payer dies (thought will need to be given to “security” for that eventuality).

In every case, the court has a duty to dismiss financial obligations between spouses as soon as possible — known as a clean break — and to fix a date for this at the time of the divorce settlement.

Sarah Keily, senior associate at Thomson Snell & Passmore, says when a couple gets divorced, there are a number of financial claims they can make against their spouse. One of those claims is for periodical payments, also known as spousal maintenance. This is a claim by one spouse for the other to make regular payments to them to supplement their income so that they can meet their outgoings.

When deciding whether to award spousal maintenance and if so, how much, the court takes into account a number of factors. These include the age of both parties, the standard of living enjoyed during the marriage, the length of the marriage, the needs of both parties and the income and earning capacity of each spouse. The court will therefore take into account the inevitable reduction in your earning capacity as a result of your time out of the workplace.

A court will also look at your reasonable income needs, including those of your children. The deficit in your earning capacity against your outgoings would be the starting point for the amount that you claim in spousal maintenance.

In brief, therefore, your career break to raise your children will be taken into account, but there are also other factors which the court will consider.

The opinions in this column are intended for general information purposes only and should not be used as a substitute for professional advice. The Financial Times Ltd and the authors are not responsible for any direct or indirect result arising from any reliance placed on replies, including any loss, and exclude liability to the full extent.

Do you have a financial dilemma that you’d like FT Money’s team of professional experts to look into? Email your problem in confidence to money@ft.com

A few years back I did some work for a US company. I held the correct visa and was paid in dollars. At the end of that year, after returning to the UK, I completed a US tax return, paid my taxes there, and then included these figures within my British return. I have not filed a US return since, as I have not done further work there.

I will be returning to the US later this year for another job. When I come to file my taxes there am I likely to be asked about the intervening years? Will they have expected me to file even while not working in the US? I haven’t yet found the old social security number I was issued — would it be better not to look too hard and instead apply for a new one?