In Paris, designers indulged their private passions — to great effect

The Chloé AW19 show began and ended with the sound of galloping hooves. “It was a ride,” said designer Natacha Ramsay-Levi of this equestrian adventure that opened with “grounded outerwear” in heritage tweeds, Prince of Wales checks and twills, before progressing towards the silky dresses and sparkly blouses — designed to look “like reflections on the water” — with which she closed the show. The collection was dedicated to love, rage, commitment and nature — a print motif showed a couple holding hands, although their relationship is a fiction: the pair in question are colleagues in the Chloé studio.

If Ramsay-Levi had taken inspiration from Karl Lagerfeld, the late designer who worked at Chloé for more than 20 years, it was in the sense of “personality” she places in design. Lagerfeld was mindful of the story — and Ramsay-Levi is the same. “I started by putting my woman in a landscape,” she said of her collection, which mixed ethereal silk dresses with tons of outerwear. “She is grounded, committed — to her emotions, to politics and engagement. I wanted her to be able to go into nature and face any kind of challenge.”

Ramsay-Levi has faced a few challenges of her own since arriving at Chloé. Her vision has been powerful, feminine and seductive, but her silhouettes and fits have been too directional for some (buyers will tell you anecdotally that it’s been a tricky sell). This collection, with its highly wearable tailoring, easy knitwear, work-appropriate trousers, shearling coats and bounty of flouffy dresses (which have always been so core to Chloé’s business) looked like a conciliatory effort to do more commercial pieces — and there were some thoroughbreds in here. Of the accessories, the bags and jewellery were grabby, while the boots — a kind of hybrid hiking sock and Seventies loafer — were among the best I’ve seen so far.

Ramsay-Levi’s Chloé is a confident one. And justifiably so: I love her aesthetic. But she needs a winning run. The horses were galloping, but this was more reined in.

Jacquemus is trotting along nicely. The brand’s founder, Simon Porte Jacquemus, is only 29, but his namesake brand celebrates its 10th anniversary this year. For a long while his show has been a pleasant enough diversion on the schedule: it takes place early in the week before the tent-pole events have really begun. And while it is best known for its social-media friendly accessories, its presence is really beginning to grow.

“After the summer collection [shown last September] the sales went crazy,” the designer said shortly before his Murano-inspired sun-splashed, pastel-coloured AW19 show. He was standing in front of a washing line filled with sunflower-coloured T-shirts, and before a façade painted cornflower blue; it was all part of his fiction about the street Place Jacquemus.

The brand is fast expanding. Wholesale orders nearly doubled last year, and he now has about 250 stockists worldwide. And yet, with her beachy, breezy nature, and her rustic country charm, Jacquemus’s woman has come in for criticism in the past for being a bit too blithe. His AW19 collection therefore was a reboot. “This collection is a new beginning for me, to reset the woman,” he continued. “I don’t want to be summarised as ‘sensualist’ and ‘South of France’ when I have so many things to say.”

His AW19 show had a new sophistication that made one sit up straight. There was less whimsy about it. The skirts, with drop pockets and patched in asymmetric panels, looked fresh and feminine. The tailored jackets and coats had a polished professionalism. And while the palette of hot pinks, clementine and sky blue made you wish for warmer climates, it didn’t look too summer frou.

Bags were vivid nylons, pannier-style and fastened round the waist; huge and slouchy or miniature and structured, and too small to fit a phone. Jacquemus, who says he spends his day “looking at furniture”, has a flair for accessories. Presumably contemplating Corbusier chairs helps? “Yes, I use a lot of direct references,” he answered. “But if I’m good at it, it’s because I have more fun.”

Dries Van Noten had also indulged a private passion to create his AW19 show: the collection starred the roses in his garden. “It sounds a bit simple,” he apologised of his “easy” decision to use the flowers, in their perfect imperfect­ion, as the genesis of the prints throughout the show. The greater challenge had then been technical: how to transfer them on to a multitude of fabrications, from pinstripes to a shimmery sheer silk organza on which nothing could be seen but the print.

Sometimes, however, easy will do nicely. And the rose here represented many things — perfection, imperfect­ion, the allure of womanhood and the passing of time. Van Noten’s gentle contrasts made for a calmly charming show — fragile femininity mixed with grey masculinity, soft down quilts and sober suits, all spiked, as one might expect from fashion’s master colourist, with gorgeous, saturated hues.

There were roses at Paco Rabanne also. Julien Dossena’s AW19 was an extravagant number in which his “elevated” womenswear sparkled with a dozen glamorous references, from Hollywood-era Marlene Dietrich to Bryan Ferry Eighties shine.

With its crystal-strewn link dresses, military frogging and tiger-sequin skirts, it all looked very evening. But Dossena was insistent that the opposite was true. “It was very mix’n’match,” he said backstage of his “refined” melange. And broken down, this collection was less party-themed than perhaps it first appeared — the pretty House of Windsor-style cardigans with embroidered florals, the long velvet tea dresses with sweeping skirts and Forties shoulders, the animal-print blazers made an impressive statement, but were all designed for day.

Personally, I didn’t find it quite as satisfying as Dossena’s recent shows. The layering of different garments felt too laboured and the styling was intense. But there were some extremely gorgeous pieces for the wannabe princess. 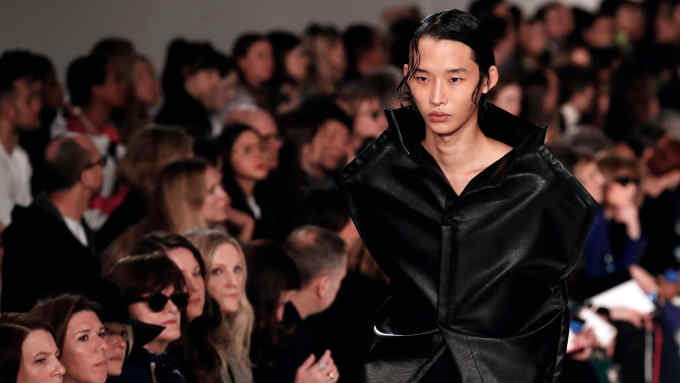