A series of technology glitches at stock exchange group Euronext is feeding concerns that its efforts to build a central role in the region’s capital markets could intensify risks around a single point of failure.

On Monday, trading in warrants across Euronext’s network halted for an hour, just two weeks after a chaotic day disrupted trading across equities, exchange traded funds, derivatives and other markets.

The group already runs the main exchanges in Paris, Amsterdam, Brussels, Dublin and Lisbon. It plans to add Oslo Bors in the next few weeks, and to plug in Borsa Italiana if it succeeds in buying it from the London Stock Exchange Group. Adding the Milan market would mean around a quarter of all equities in Europe trading on one platform.

That €4.3bn Italian deal could make Euronext “the backbone of the Capital Markets Union in Europe”, said its chief executive, Stéphane Boujnah, referring to the project to unify the EU’s asset markets.

But Monday’s outage was a sharp reminder of the perils of this approach.

“Once again investors have found themselves unable to trade because of a technical disruption,” said April Day, head of equities at Afme, a lobby group that represents banks and investors. “The increasing consolidation of exchange operators puts the market at unnecessary risk as it increases exposure to a single technology failure.”

The glitches last month prevented trading across Euronext’s stock exchanges for three hours and ended with the abandonment of the crucial end-of-day auction. Only Oslo, which runs on a different technology system, escaped the mess.

Watchdogs in France, Portugal and the Netherlands told the Financial Times they have contacted Euronext about the failures. The Portuguese regulator said it had also contacted the pan-European markets regulator, Esma. The Irish regulator, the central bank, declined to comment.

The failure of Euronext’s systems to flip from standard daytime trading into the closing auction, a 10-minute wind-down after the market officially closes, was particularly damaging.

Investors increasingly rely on this period to shift large blocks of shares without disturbing prices on the open market. This also ensures the price they receive is very close to the final price of the day, which is used to value portfolios and calculate indices.

Last year French regulator AMF found that 41 per cent of all daily trading volumes of CAC 40 stocks happened during the closing auction on Euronext Paris.

When Euronext’s markets failed to switch over, some big orders were dumped into the open market. Algorithms reacted, sending prices in stocks like LVMH, KPN, Royal Dutch Shell and Euronext itself, in wildly different directions, at a time when the market should have been closed.

“It felt like I was watching fireworks with all the flashing,” said an equities trader at one investment bank, as the screens turned from red to green, and vice versa.

Some stocks swung more than 10 per cent, triggering trading halts. Traders reported some deals going through an hour after the market closed. Euronext was forced to cancel all trades that occurred after 5.30pm, reprice the closing level of its indices, send out a record of the final prices and work through issues with its clearing houses. Bank traders and executives were angry at being left in the dark for hours on the fate of their positions.

Two days later, the exchange said it had mislabelled some of the buy and sell orders sent to the clearing houses, which were intended to clear up the mess.

Euronext apologised and blamed third-party software. “It was a technical issue . . . and was not related to a cyber attack or a problem in [our] proprietary code,” it said.

The exchange added it had invested significantly in its technology, particularly since 2018. “The risk of outages and technical failures is always present at any large exchange group, but we have taken actions to ensure that a similar issue does not happen at Euronext going forward,” the company said.

The problems reflect a dilemma for financial markets: are the cost efficiencies of relying on one set of core technology worth it? Or does that leave large chunks of the market too vulnerable to shocks? 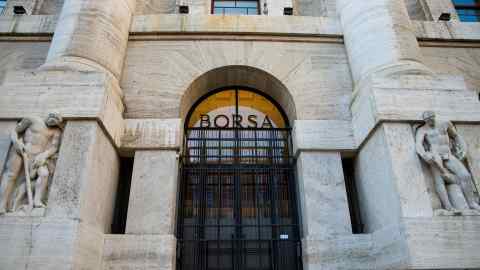 “Running on a single platform means that members and traders have to connect to fewer systems and interfaces,” Euronext said. Moving Borsa Italiana on to its Optiq system will save Euronext €60m a year after the third year of ownership, Euronext has forecast.

Running exchanges on separate platforms may prevent widespread disruption “but you double up on costs, which defeats the point of consolidation”, notes Steve Grob, former head of strategy at Fidessa, a trading technology group.

Ms Day called for a common market practice by which trading can move to alternative venues when outages occur.

For now, that is not working. Venues such as Cboe Europe, Turquoise or Aquis Exchange did not pick up the slack when Euronext faltered.

“In Europe, when the traditional primary market closes, all other trading seemingly stops as well,” said Richard Worrell, head of Emea equity trading at Janus Henderson. “We need to address this failure,” he said.