Whatever happened to the wild strawberry?

Nemi is a small town in the Castelli Romani region about 20km south-east of Rome that is famous for its wild strawberries. Every June the town throws a festival to celebrate its harvest. The streets come alive with music and dance and local girls in traditional costume – a cross between Morris dancers and Snow White – hand out strawberries to thousands of visitors. Strawberries also turn up in a few speciality dishes such as strawberry pizza and strawberry risotto, the latter a bruised-pink concoction dotted with berries and blanketed with parmesan. “If you tried this risotto enough, you’d probably love it,” says Jacob Kenedy with as much tact as he can muster. The chef owner of Italian restaurant Bocca di Lupo in London has brought me to Italy to share in his passion for wild strawberries. At strawberry risotto, however, he draws the line.

Regular strawberries have all but replaced wild strawberries in commercial production. Large and sweet (at least in theory), the versions we find in supermarkets are often disappointingly soggy and flavourless. By contrast, wild strawberries (Fragaria vesca) are typically the size of raspberries and headily aromatic. Nemi strawberries, which grow in the woods around the town but are also farmed, are among the finest, with a fuller, richer taste from the volcanic soil.

Regular strawberries you can eat. Wild ones you can only delect

Every year Kenedy comes through Rome on his way to a family home in Sperlonga and his love for wild strawberries is reignited. “What led me to open Bocca di Lupo,” he says, “was that I was fascinated with foods that transported me to Italy. Wild strawberries do that. They’re part of the culinary furniture like carbonara. The taste is so intense, it feels unreal.” He likens the flavour to bubblegum: “A caricature of strawberries but also completely natural. Eating wild strawberries you understand what people were thinking when they made strawberry flavouring.”

During the season (which can last until August), Kenedy serves wild strawberries at Bocca in dishes such as rum baba, maritozzi (creamed buns) and mascarpone gelato. But thus far he’s never made wild strawberry gelato using fresh strawberries (though regular strawberry has featured at Gelupo, his gelateria across the street). So before leaving Nemi we pick up a case to make some at one of the best ice cream shops in Rome. Gelateria del Teatro on Via dei Coronari is run by former pastry chef Stefano Marcotulli and his partner Silvia. Its flavours include Amalfi lemon, Sicilian pistachio, liquorice from Calabria and pairings such as raspberry and sage and dark chocolate with nero d’avola (Sicilian red wine).

HTSI
A new taste of Honey & Co in Bloomsbury 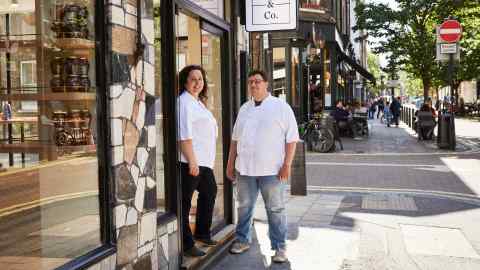 The couple have never attempted wild strawberry gelato either. Wild strawberries cost €20 a kilo here (and four times that in the UK). Regular strawberries are closer to €4 a kilo. So mushing up Nemi berries into gelato is “like blending a Rolex”, observes Kenedy. But everyone is intrigued to see how this turns out. Silvia tips the strawberries into a bowl; adds water, sugar, natural stabilisers, dextrose and lemon juice; then blends and pours the mixture into the ice cream machine. Ten minutes later, it’s done. Baby-pink and speckled with dark seeds, the gelato is velvety, perfumed and astonishingly good. The couple are so impressed they slide the tub of gelato directly into the counter display.

“That gelato had the same effect on me,” Kenedy says later, now convinced to add his own version at Bocca. In London, Kenedy sources wild strawberries from Spain or France because supply chains from Italy are not as viable. All Greens sells in store or by pre-order (it also home delivers), though you can easily grow your own too. Kenedy prefers his strawberries with nothing more than a sprinkling of sugar and some lemon to amplify the flavour. “Regular strawberries you can eat properly,” he says. “Wild strawberries you can only delect as they’re tiny.” He tells a story of his two-year-old son Dylan, who was already a strawberry junkie when he tried wild strawberries for the first time. “He couldn’t believe what he was tasting,” he recalls. “His eyes popped out of his head. He wolfed down the whole bowl.” For a two-year-old, endorsements don’t get any bigger.