A man and a woman in profile, painted in blood-red ink on yellow paper, stick out their tongues at each other. The man’s protrusion is long, thin and flaccid. The woman’s shorter and more rigid, unmistakably erect. Entitled “The Conversation” (2007), this morsel of demonic mischief is a perfect metaphor for Anatomies of Desire, a new show devoted to Picasso and Louise Bourgeois at the Zurich gallery of Hauser & Wirth.

By the time Bourgeois painted her tongues, the Spaniard had been dead for over 30 years. Nevertheless his colossal shadow still loomed over every contemporary artist, just as it had for most of his 70-year career.

Bourgeois, by contrast, found success late in life. Born in 1911 in Paris, she had her first solo show in New York in 1945 but little recognition followed. Only after a retrospective at MoMA in 1982, when she was already 71, did her name gain international heft.

Such facts matter because although the Zurich show — which brims over with tongues, breasts, vaginas and penises in the work of both artists — seems to be about sex, it is really about power. Who gets to see and who gets to be seen. To show and be shown. To abuse and be abused.

Although the show is full of riveting encounters, it’s best to overlook in the first gallery the inclusion of several of Picasso’s most demure female portraits — one entitled “Femme en Blanc” (1922) has just been the subject of a multi-million-dollar law suit — for they add little to this particular journey. Instead, focus on two large stuffed corduroy sculptures by Louise Bourgeois, “Couple III” and “Couple IV” (both 1997).

Comprising headless figures with prosthetic limbs, the pair suggest that something is amputated when two people conjoin. Bourgeois’s quote on the gallery wall underlines the point: “I am exasperated by the vision of the copulating couple, and it makes me so furious . . . that I chop their heads.”

Picasso, on the other hand, thrived on fusion. His 1969 painting “Le Baiser” shows his male and female protagonist cross-eyed from lust, their lips melting into inseparable labial folds. His wall quote starts tenderly — “In the end, there is only love” — then takes a darker turn as he suggests gouging “out the eyes of the painters, as they do goldfinches, for them to sing better”.

That switchback between sweetness and sadism made Picasso an electrifying artist and a dangerous man. His biographer John Richardson, who knew Picasso well, testifies to the artist’s “sadistic side”: he expected his lovers to read the Marquis de Sade. Even his mother told one of his companions to steer clear as her son was “only available to himself”.

Many critics like to dismiss Picasso’s cruel streak, evinced in his myriad works of chopped, reconfigured women, as a purely formalist exercise. In truth, he was a painterly Frankenstein whose visual dismemberments were motivated by a mongrel wellspring of emotional and artistic desire. Here in Zurich, his most chilling work is a small early drawing from 1902 of a man performing cunnilingus on a woman who lies back like a pinned butterfly, hands covering her eyes. Drawn in simple lines, with a sea-blue wash staining the surface behind her pillow, its dispassionate clarity — no fractured limbs here — feels close to pornographic.

Such coldness comes from being in control. Little wonder that Bourgeois, who once said she was “afraid of power” and identified “with the victim”, took a different approach. In the same vitrine as Picasso’s queasy-making drawing, her images of sexuality — “Couple”, the 2009 watercolour of male and female torsos, her swollen belly sloshed in blood-red stains, his erection a pulsating black-blue; a red condom, “Untitled” (1990), sewn to the paper like coagulated dribble of blood — force us to acknowledge that bodily fluids stain and spill, mortal flesh splits and scars.

Bourgeois said her trauma was rooted in her domineering, unfaithful father: he had an affair with her nanny and teased her for lacking a penis. In Zurich, her works often feel like silent screams against their neighbouring disfigurements by a male artist cut from similarly flawed cloth.

Among various piercing encounters is that of Bourgeois’ “Stake Woman” (1970), a small chunk of wood — part tear, part vagina — impaled with rusty nails, alongside Picasso’s “Weeping Woman” (1937), a profile of Dora Maar, his mistress at the time. With what look like knitting needles for tears, Maar’s misshapen fingers attempt to damn a cascade gushing not from her eyes (which Picasso has transplanted on to the side of her forehead) but from the top of her nose. Maar, Picasso once explained, typified the “weeping woman . . . because women are suffering machines”.

In truth, Bourgeois was no vulnerable herbivore and there was far more to Picasso than boorish flesh-eater. From 1971, when the Spaniard’s powers were on the wane, comes the painting “Nude Man and Woman”. Here, the man is a pale, nervy creature, his golden-yellow face, sparse beard and alarmed expression that of an exhausted old lion terrified of usurpation, while the woman stares over his shoulder, an oracle predicting his eclipse.

As for Bourgeois, she got her revenge. Most famously with her 1974 installation “The Destruction of the Father” (not on show), which depicts children murdering and eating their abusive dad. But her entire shimmering oeuvre can be read as a resounding victory over a world bent on banning women from studio, gallery and museum. Let the last word go to her diminutive bronze torso whose voluptuous breasts find equilibrium thanks to the erect neck-cum-penis that juts above them. Drily entitled “Fragile Goddess”, this tough little hybrid proves that Picasso was not the only Frankenstein in town. 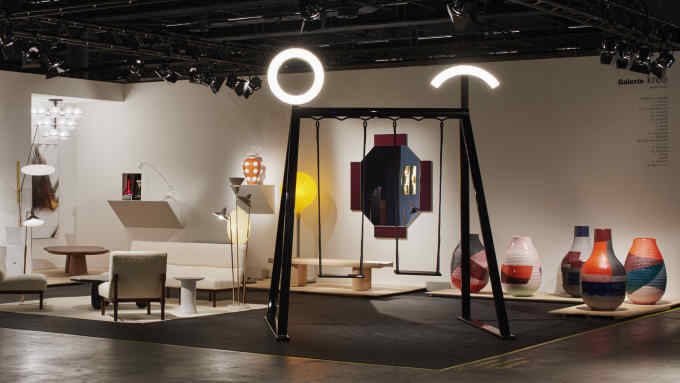