Diamond of the season: a date with Bridgerton’s Phoebe Dynevor

She captivated audiences in 19th-century period romp Bridgerton. Now the British actress is letting her own personality shine

How bittersweet to become a sudden star during lockdown. Phoebe Dynevor, who plays ingénue Daphne in the sexy Georgian TV series Bridgerton, became overnight famous during the most claustrophobic time in recent history. Her delicate features are now globally familiar and her Instagram following shot to more than 2.5m. But the 26-year-old hasn’t been able to try on her fame in a public way; instead, like the rest of us, she has had to stay home.

Now she is emerging out of that cocoon into the spotlight of public recognition. “It is really surreal,” Dynevor says. “I feel like I’m having a double whammy. Even being with my friends last weekend, I thought it was weird to get back into the real world anyway and then there’s also [the new fame]. I still feel like no one knows who I am, but then I’m recognised.” And she doesn’t mind, she hastens to add. “People are always so lovely and sweet. I think because the show brought a lot of joy in lockdown, they’re always good interactions.”

In a way, it’s surprising she is recognised, given that people have only really seen her wearing 19th-century-Empire-waist gowns, long satin gloves and tiaras. “Yes, I think when people see me out they are somewhat surprised that I don’t dress like Daphne,” she says. “Like, ‘Is she really wearing Nike Air Force 1s?’”

Today, on a rare day off during filming of the second series of Bridgerton, Dynevor is sans sneakers and instead adorned with Louis Vuitton’s new high-jewellery launch, Bravery. It’s a collection worthy of the grandeur of Daphne (some of the pieces cost in the millions), yet is modern enough to look comfortable on the young actress. Behind the camera, Dynevor radiates with the same sweet, sculpted beauty and swan-like neck seen on screen. “Jewellery on her just sings,” says Francesca Amfitheatrof, Louis Vuitton’s artistic director of jewellery and watches. “You need to be enough of a person to carry it. I think that jewellery is the one accessory or object that we wear that has a way of rubbing off on you something that’s mythical, something that goes above and beyond.”

Bravery is a homage to the man Vuitton, in the 200th-anniversary year of his birth, and comprises 90 pieces. The lead attraction, the Le Mythe necklace, is an engineering masterpiece that, by removing its various parts, can be worn in 12 ways. It also boasts an LV monogram flower (an impressive trio of sugar-loaf sapphires and an emerald) and six Louis Vuitton star-cut diamonds, which the house has been working on for three years. “It’s like the holy grail of jewellery to have a diamond cut that is recognisable from afar,” says Amfitheatrof. “How do you brand a diamond? How do you make a diamond recognisable from 10 tables away?”

Likewise, Bridgerton is a brand with a distinctive and all-consuming world around it, a world in which all the sex and gossip and drama are iced in bright, fondant colours in an over-the-top millennial prettiness, setting it apart from other period costume shows. To watch it during the dull grey days of lockdown was to feel both stimulated by and nostalgic for a time we never knew. “I was excited to wear everything,” says Dynevor of the costumes. “Every dress was beautiful, but I really loved the day dresses in particular. There’s one in episode six when Daphne is in the garden picking lavender and there are little purple flowers on her dress. That attention to detail was incredible. There were some dresses I think I wore only to walk down a corridor and then I’d be in something completely different – so fabulous,” she laughs.

Although she says she “lucked out” by only having to wear a half-corset (unlike some of the other actors), the costumes were a significant part of her transformation into the role of “diamond of the season”, as she is dubbed in the show. Working out how to hold herself and wear the wardrobe was all part of the six weeks of preparation, including choreography, 19th-century etiquette and horse riding that she undertook alongside co-star Regé-Jean Page, who plays Simon Basset, and who has, to the disappointment of millions, decided not to return for an encore. “The wardrobe completely changes the way you carry yourself, and it really does do 80 per cent of the work for you. In real life – and my director said this to me the other day – I sort of stomp into rooms. I’m always wearing boots or trainers, but as soon as I got into costume for Daphne – the little tiny-heeled pumps and the way the dresses flow at the back – it makes you stand up straight and sort of flow. It makes you want to lift your head up.”

All the better for showing off the costume jewellery, made in the on-set workshops by a team of jewellers. “Daphne’s never without a pair of beautiful earrings or a necklace. There was a real obsession with necklines and collar bones at the time,” says Dynevor. “They wanted to draw the eye to the neck, so I’d always have beautiful matching earrings and a necklace. In episode four, when Prince Friedrich gives Daphne a highly valuable necklace that she then tears off – that was the most spectacular one. It’s so funny, people talking about my neck acting really makes me laugh.” (There are YouTube montages dedicated to Dynevor’s active neck and throat.) “I don’t think I’m a neck actor in other things,” she says wryly. “But in Bridgerton, particularly with the way the corset sits and the attention on the neck, it makes you hold your shoulders a certain way.”

It’s a quality that didn’t escape the notice of Louis Vuitton, with which she has since become a “friend”. “Regal sounds manufactured as a word, but you have to have something in you that means you can carry high jewellery and Phoebe really does,” says Amfitheatrof of Dynevor’s affinity with her statement pieces. “It’s important that it’s on the right person and important for our clients to know how a piece of jewellery will affect them and give them a certain strength and power.”

Dynevor, who grew up in Manchester and now lives in a flat near Hampstead Heath, has acting in her blood. Her mother is the veteran Coronation Street actress, Sally Dynevor; her father, Tim Dynevor, is a TV scriptwriter. She started acting in 2009, when she was 14 and won a role in the fifth series of the long-running BBC show Waterloo Road. She has starred in period pieces before – The Musketeers, The Village and Dickensian – and says it’s the joy of her job to experience the dress of different eras: “It’s what I love most about it.” But it does impact her real-life wardrobe. “Every time I finish a job I seem to want to dress in totally the opposite way to the character. Before Bridgerton I was a little bit of a flowy-dress girl, but I’ve now definitely steered away, without really consciously doing it, from the feminine stuff.” To assert her own personality? “Yes, because you do lose yourself. Especially with something like Bridgerton, when it was five months of shooting every day. You show up in tracksuit bottoms because you’re not leaving till 8pm and you’re wearing a wig. So I’d wash my hair on Friday night and have one day of being myself before the wig went on again and suddenly you’re thinking, ‘Wait, who am I? What do I wear in real life?’ It’s bizarre.”

Before she went back to the series, she shot a film, The Colour Room, about the English ceramic artist Clarice Cliff. “That was great because it was so different to Bridgerton, a different time – the 1920s – and such a different character. Clarice was so outward-facing, such a creative. The way I played her is that she didn’t have any awareness of her appearance, didn’t even think about it, and I loved that. During the pandemic, none of us looked in the mirror really, so it was fun to be able to channel that into the role and not feel any pressure to look a certain way. Daphne is the complete opposite. She’s aware of herself in every way, but it has been nice stepping back into her shoes and being able to prance around and look good.”

Style
Bridgerton and the art of power dressing 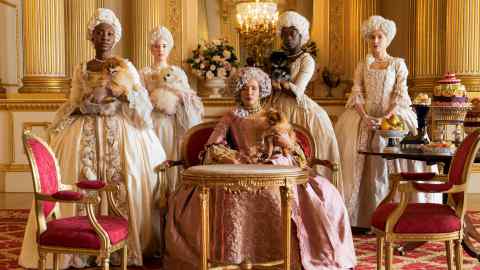 With an actress as a mother, I imagine, there must have been a certain glamour in the house when she was growing up, but Dynevor dismisses the idea. “In real life my mum was always a dungaree wearer, which probably rubbed off on me a lot. Work for her was the dressy time, not home, and I always thought that was kind of cool.” Her paternal grandmother, Shirley, who also worked in television, was the fashion influence. “She always looked divine and still does. It was always one piece of really beautiful jewellery, a pearl necklace or pretty earrings. Always a flash of something – gold on her eyelids and a pop of colour.”

Dynevor’s own personal style is something she’s still working to define. “When I was growing up, the look was all quite flamboyant — big make-up, the little dresses and the heels. I did love the glamour of going out and had a couple of years when there was a lot of make-up and false eyelashes. But I think you have to go to the extremes to know what you like and then pull it back. Even today I’m still figuring it out,” she says. “Especially now, being in the public eye, seeing photographs of my outfits and thinking, ‘Oh... next time I… should not wear that,’” she laughs. “I’m definitely having a big learning experience.”