What will Apple do without Jony Ive?

When Jony Ive became leader of Apple’s design studio in 1996, the company was in a precarious state. It was slashing thousands of jobs to cut costs and many on Wall Street thought the “insanely great” company had simply gone insane — and might soon go out of business.

Within just two years, the turnround had begun. With co-founder Steve Jobs back in charge, 1998’s release of the candy-coloured iMac, designed by Sir Jonathan, kick-started a prolific and profitable two decades unlike any other in Silicon Valley history.

From the revolutionary iPod and iPhone, through the death of Jobs and onwards to its new frontier in wearable devices such as Apple Watch and AirPods, the British designer has sat serenely at the centre.

That era, however, is now drawing to a close as Sir Jonathan prepares to move on from Apple to launch his own new venture, LoveFrom, after more than two decades at the Silicon Valley giant. 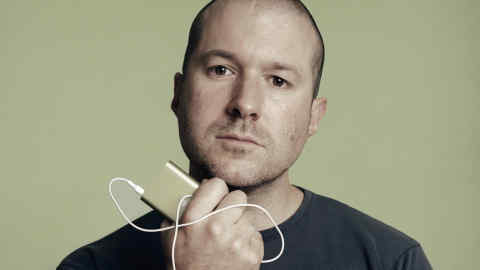 “Jony is one of a kind,” Tim Cook, Apple’s chief executive, told the FT in an interview this week. “The work on the original iMac was sort of the point at which people began to pay attention to Apple again on something other than how badly economically the company was doing.”

As a company worth nearly $1tn, Apple today is financially secure. But Sir Jonathan's looming departure will once again raise questions about its future.

This is not the first time that Sir Jonathan’s role has evolved. In recent years, his design expertise has extended beyond crafting Apple’s pocketable devices. He helped retail chief Angela Ahrendts overhaul its stores, from fixtures such as its tree-lined “Genius Groves”, down to simplifying product packaging.

More significantly, he oversaw the company’s long-planned move to its new headquarters, Apple Park, which was first conceived with Jobs back in 2004 and designed in partnership with British architects Foster + Partners.

In 2015, Sir Jonathan handed off managerial responsibilities for the design team to focus on Apple Park. At the time, the move prompted some speculation that he was preparing for his exit, but in 2017 he took back those duties again. Speaking at a Wired magazine event last year, he appeared to suggest that he was back for the long haul, saying: “There’s an awful lot to do and an awful lot of opportunity.”

The move to Apple Park, he had said then, was a big part of that “energy and vitality”.

Last month, Apple held a garden party for its staff to mark the completion of the move to its new spaceship-like headquarters; Lady Gaga performed a private concert. Sir Jonathan was due to give a short speech at the event but at the last minute had to fly back to the UK to visit his father, who had just suffered a stroke.

Though Sir Jonathan was absent and most of the employees attending were unaware, the event inaugurating the new HQ would prove to be a watershed moment for the head of Apple’s design team.

“[Apple Park] was a really significant project that was unlike many of our others, because it was for us,” Sir Jonathan said. It also brought Apple’s entire design team together for the first time into one purpose-built studio, with industrial designers sitting side by side with font and interface designers.

“With the completion of Apple Park, that also meant in a way that the vision for this quite extraordinary team was finally enabled,” he said. “Part of the timing for LoveFrom is in some ways connected to having that very clear sense about the health and vitality of the design team.”

Mr Cook agreed: “Perhaps the most important legacy that he leaves . . . is the team.”

The power of the design lab

Jobs was a frequent visitor to Apple’s design lab, according to his biographer Walter Isaacson, and ate lunch with Sir Jonathan most days.

Asked how often he visits the design studio, Mr Cook said: “I have a lot of pressures on my time, as we all do, but as often as possible — and certainly in the key moments.”

By Apple’s outsized standards, the tight-knit group of people who work on product design is small. It runs to just a few dozen people out of an organisation that employs some 132,000 staff.

1989: Graduates with a first in industrial design from Newcastle Polytechnic

1992: Joins Apple as a full-time employee in its industrial design group

1998: Release of the iMac, the first major success of his tenure as head of the Apple’s design team

Yet the team wields a disproportionate influence inside the Cupertino-based company. With an extensive array of tooling and fabrication equipment that is rarely found outside a manufacturing plant, the studio explores new product categories and the materials that might build them, from unique blends of aluminium to ceramics.

They define not only a product’s appearance but how its software looks and feels, how it responds to gestures, even how an iPhone or Watch gently vibrates to give a user “haptic feedback”.

“No group within Apple has more power than the industrial designers,” said Neil Cybart, an independent Apple analyst with Above Avalon, in a research report on the company’s leadership structure in November. “Jony’s contributions are found in literally every product Apple has shipped during the past 20 years. He oversees the vision guiding the largest design company in history.”

What can match the iPhone?

Sir Jonathan has thousands of patents to his name, encompassing the original iPod and iPhone to more obscure innovations, including the iPad’s magnetic cover, the Apple Store’s wooden tables and a lanyard used to attach an iPod to a wrist.

The names that sit alongside Sir Jonathan’s on those design patents have become familiar to close Apple watchers. For decades after it was created in the late 1980s, Apple’s core industrial design team saw hardly any departures.

But there has been a noticeable uptick in turnover within the “ID” ranks.

Recent losses included Daniele De Iuliis, who had worked at Apple for almost 30 years, and Rico Zorkendorfer, the Wall Street Journal reported in April, while veterans Christopher Stringer and Danny Coster both left in 2016.

Sir Jonathan’s departure is likely to reopen a debate that has been simmering for several years — namely how will Apple come up with a new hit product that can match the unprecedented success of the iPhone, whose record-breaking profits propelled Apple to become the first trillion-dollar company last year.

He dismissed such concerns. “Numbers have never been the measure that I turn to, to affirm or describe the success of a product,” he said. “There’s no motivation that I derive from being different. I’m interested in trying to make things better . . . in trying to develop and craft products and experiences that are characterised by their care and not of carelessness.”

In any case, it may be that no single product ever will top the iPhone — for any tech company, not just Apple. It is a question that hangs over Silicon Valley as the industry casts around for a new platform, be it virtual reality or smart speakers, that might become as ubiquitous and essential as the smartphone.

The shift to services

Despite a slow start for the Watch in 2015, Apple has begun to find real success with its accessories, including its wireless AirPods, while it is also putting greater attention on an expanding portfolio of online services, including games, news and video. “We are operating at a breadth and depth level that we’ve never operated at before,” Mr Cook said.

Mr Cook and Sir Jonathan have both pointed to healthcare as a potential new market for Apple, building on the Watch’s new capabilities for detecting heart irregularities. Mr Cook told CNBC earlier this year that health could become Apple’s “greatest contribution to mankind”.

When he rushed to his father’s hospital bedside, Sir Jonathan said, “yet again I got a glimpse into an environment and set of products that I think could be so much better and clearly there are so many problems to be solved.”

But the structure of the healthcare industry presents even more daunting barriers to transformation than the music or mobile phone businesses that Apple has upended under Sir Jonathan’s guidance.

Healthcare is just one example of how the battleground has changed for Apple in recent years. Despite pioneering virtual assistants with Siri, Apple found itself outflanked by Amazon’s Alexa and Google Assistant in both sales of smart speakers and artificial intelligence capabilities. As Silicon Valley looks to smart glasses and autonomous cars as new frontiers, it is unclear whether its continued reliance on the iPhone for two-thirds of its revenues will prove an asset or a distracting liability.

Some analysts believe that new blood could invigorate Apple’s response to these challenges. Alongside the high-profile departures of Ms Ahrendts and Sir Jonathan, Apple poached John Giannandrea from Google to become its head of machine learning and AI strategy, as well as Hollywood veterans Jamie Erlicht and Zack Van Amberg from Sony Pictures Television to run its push into original video.

“The apparent acceleration in the pace of change within Apple at the executive level reflects the paradigm shift the company is undergoing from a hardware-driven story to ‘Apple as a service’,” said Gene Munster, a former Wall Street analyst turned tech investor with Loup Ventures, in a note earlier this year. “To successfully capitalise on new opportunities, Apple needs a very different set of skills.”

Just this week, Apple continued to scoop up talent in new areas with the acquisition of Drive.ai, a self-driving car start-up. Sir Jonathan may have served several times as a member of the jury at the Goodwood Festival of Speed, an annual vintage car rally in the English countryside, but rethinking the “human-computer interaction” between a robot driver and its passengers is completely new territory for just about everyone in Silicon Valley.

‘No one person’ decides on products

Perhaps the most significant concern for investors will be that Sir Jonathan’s move will take away another arbiter of focus and product direction that Apple had already lost with the death of Jobs.

In their separate interviews with the FT this week, Mr Cook and Sir Jonathan insisted that no single person at Apple decides which innovations graduate from its R&D labs and which are sent back to the drawing board. “The company runs very much horizontally,” said Mr Cook. “The reason it’s probably not so clear about who [sets product strategy] is that the most important decisions, there are several people involved in it, by the nature of how we operate.”

Meanwhile, Sir Jonathan’s focus is already starting to look beyond the steel and glass borders of Apple Park, saying he wants to “solve some complicated problems”.

LoveFrom itself defies traditional categorisation. “I have no interest in creating yet another design agency,” he said firmly. “What’s important is the values and what motivates that collection of people …Small groups of people, I think as Apple has demonstrated over the years, can do some extraordinary things.”