In Milan, Dolce looks backwards while Versace raves on

A Dolce & Gabbana show can be a discombobulating experience, so often is it entirely separate from the rest of the fashion conversation. Domenico Dolce and Stefano Gabbana’s seasonal fashion shows are not listed on the official calendars of the Camera Nazionale Della Moda Italiana, the organising body of Italian fashion. There is simply a gap on the schedule, every Saturday of Milan menswear, where fashion stops, and then later carries on.

Dolce & Gabbana have built a sizeable business from their singular approach to design — eschewing trends, and ceaselessly mining Domenico’s birthplace of Sicily as inspiration, their privately owned business turns over an estimated €1.3bn annually. And that size allows Dolce & Gabbana to do whatever they like — “We makes the rules and laws,” went the lyrics to the song Jambo, by Italian producer Takagi and Ketra, which played the soundtrack to their latest show in that Saturday gap. “We can do no wrong.”

The designers have, of course, done wrong recently. In November, they were at the eye of a storm of criticism for a culturally insensitive video coinciding with a show planned in China, which was ultimately cancelled. A number of retailers also dropped their line in China — which accounts for around 30 per cent of their turnover. The designers issued a public apology. A rare occurrence: in the past, they emblazoned T-shirts with the phrase #BoycottDolceGabbana, mocking social-media criticism of their decision to dress Melania Trump.

All of that has been well-documented — because, despite the belief of many, including people in the industry itself, fashion is now paradoxically operating on a global stage and under a microscope. And what happens in fashion registers outside, especially when it is seen as offensive, or belittling, or to be appropriating other cultures. Just last week, the Mexican minister of culture Alejandra Frausto decried the American fashion brand Carolina Herrera for allegedly using embroideries of Mexican indigenous communities in their latest collection. So if fashion is about capturing the mood of the moment, the geist of the zeit, the one we are living in is extraordinarily sensitive, heightened, tense.

Dolce & Gabbana’s response for Spring/Summer 2020? A somewhat perverse and tone-deaf one, honestly, with models emerging dressed in crisp khakis, like a chisel-jawed recasting of It Ain’t Half Hot Mum, from a backdrop of lush jungle foliage. The catwalk was leopard-print, which also printed the clothes, alongside patterns of coconuts, watermelon slices or and bananas. It felt like it came from another, simpler, time, when other cultures were easily cherry-picked for visual motifs: perhaps the 50s, when men were men and women were women and cars were big and shiny and bore printing across a pair of teeny-tiny swim shorts (ironically, the sort referred to colloquially as a ‘banana hammock’). The 50s theme was reiterated in higher-waisted trousers, wider shouldered tailoring, and Aloha shirts cut sure in the body. They also came in the form of supine pin-up girls sprawled across shirts, with slogans like “Choose Me” scrawled across them. In an era of #metoo, “Choose Me” feels like the wrong message, no question.

There were, however, several questions that preoccupied your mind during this show. First, given Messrs Dolce & Gabbana’s track record — generally reticent to apologise for any offence taken — was this collection deliberately baiting the PC-brigade, as the lyrics of that soundtrack implied? Or was it entirely innocent, accidental, ignorant of the interpretations these themes can have in this day and age?

And secondly: which of those is worse? “My philosophy is, when there is a mistake, life teaches you which way to go. It’s a lesson,” Domenico Dolce told British Vogue this week, ahead of that Saturday show. The lesson perhaps needs to be hammered home harder. Because, even if Dolce & Gabbana’s customer will buy these garments, for our times, this felt all wrong.

Donatella Versace, by direct contrast, is acutely aware of the moment. She sees it as part of her job to shift with the times — with varying degrees of success, and to varying distances away from the established Versace formula of glitz and sexiness and vibrant colour.

“The question I ask myself today is always the same: what does it mean to be a man today?” Versace said before her show on Saturday evening. Every season, she comes back with a different answer — her man this season is slicker, slimmer than the stereotypical Versace himbo immortalised in Gianni Versace’s book Men Without Ties (read: men without many clothes either). There were lots of ties in the Spring Versace collection, and also lots of incongruous black leather, which is shaping up as a weirdly ubiquitous fabric for next season (one probably confined to the catwalk, for all the talk of fashion’s impact on the wider world).

The collection was inspired, in part, by Keith Flint of the Prodigy, who Versace knew and who died this March. Models had hair brightly dyed, and (intentionally) badly cut; a car in the centre, created in collaboration with Canadian artist Andy Dixon and laden with flowers, felt oddly funereal.

But the collection itself ricocheted off reference points resonant to a younger generation — slightly dodgy mid-nineties shapes; colour bold enough to set your teeth on edge; mixed-up, chopped up denims; pumped-up trainers. There were also lots of bags — the latter two are categories Versace is seeking to expand exponentially, shifting their combined impact from 35 per cent of turnover to 60 per cent to power its $900m turnover to a $2bn aim detailed in fiscal results released by its new(ish) owners, Capri Holdings, earlier this year. Business, Donatella Versace says, doesn’t influence her creative process, “More the breadth of the products we offer.” More means more — a phrase that seems very Versace, and evidently makes sense, and hopefully money.

The interesting thing with Versace is that despite its absolute singularity of voice and vision, it does manage to be part of the fashion conversation of any given moment. That is largely due to Donatella Versace herself: granted, a 64-year-old Italian billionaire is an unlikely cultural barometer, but she listens — to advisers, to her teams, stylists, designers — and then acts. That was also her role when her brother Gianni was alive also, to plug him, and the company he founded, into what was happening in any particular time. Donatella, incidentally, first pushed Versace to use supermodels, and hence make history.

She’s still pushing today, trying to be new, trying to stay relevant. And now, trying to make those new sales figures. Something tells me all three will happen — not least because the Versace name and signature are strong enough — have been strong enough — to stand the test of time. 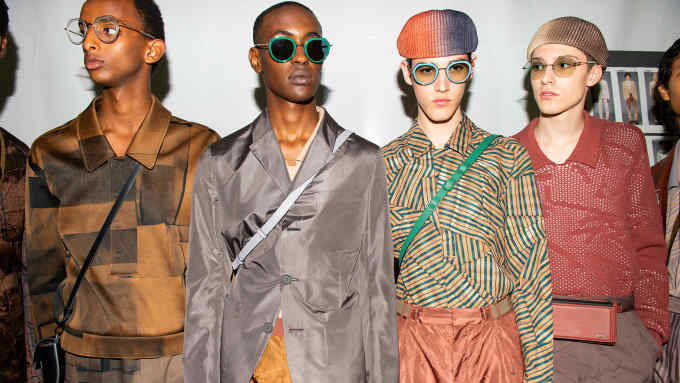