More than a year into the Covid-19 crisis, the FT’s Global Boardroom gathered leaders from around the world to plot how government, business, society and finance can build a sustainable recovery.

The FT’s flagship digital gathering, staged over three days last week, debated everything from the progress of Covid-19 vaccination programmes and the new US administration to the ways in which the pandemic has transformed the way we live, work and communicate.

Thousands of participants from San Francisco to Singapore tuned in to free-to-view debates on how economies are rebuilding, the steps that must be taken to assure growth and competitiveness and what the post-pandemic world might look like.

Video of all the sessions is available to view on demand here. Below are some of the conclusions from the Global Boardroom’s third edition. You can already sign up for the fourth edition scheduled for December 7-9.

Melinda French Gates urged wealthy nations to stop “hoarding” vaccines and expressed disappointment about how little was being done to stop the pandemic from spreading in the developing world. A panel of vaccine specialists including the co-founder of BioNTech, Ugur Sahin, called for more jab manufacturing facilities in poorer countries to ensure the world was better prepared for the next pandemic.

“We all understand that the virus will stay with us and that most likely some sort of revaccination will be needed,” said Sahin.

Kate Bingham, the first head of the UK’s vaccine task force, said that without more global manufacturing sites there would always be “tension” between supplying domestic populations and those elsewhere.

“This pandemic has shone a spotlight on the inadequacies in a lot of supply chains,” she said. “We need to avoid nationalism, as that doesn’t help anybody.”

“India’s giant second wave has been a tsunami . . . causing a humanitarian crisis,” said Mallika Srinivasan, chair and managing director of Tractors and Farm Equipment. While rural India was largely unaffected by the first wave of coronavirus, she said “this time there is no such difference — in the cities we had hotspots and safe zones, all of that has disappeared”.

Tokyo governor Yuriko Koike said the coronavirus was under control in the capital but that Japan needed to accelerate vaccinations nationally. She said she was determined to hold the Olympic Games safely as a “symbol of human unity”.

In an interview with the FT’s Nordic and Baltic bureau chief, Norwegian prime minister Erna Solberg said the pandemic had prompted a rethink on how to tackle future crises, including in her own country, which she conceded had been able to spend more money on shoring up its economy than most.

In a session on global economic prospects, OECD chief economist Laurence Boone said “the outlook is brightening”, but warned of the impact of uneven vaccination deployment amid a “difficult transition” towards recovery.

“What matters is using every single penny of public debt for public use — that is not what was always done in the aftermath of the financial crisis,” she said.

Olivier Blanchard, senior fellow at the Peterson Institute for International Economics, argued that Europe, including his native France, was “not doing enough” and suffered from what he called “Biden envy”, referring to the new US president’s big spending plans.

David Malpass, president of the World Bank, said that in the world’s poorest countries debt suspension had not gone as far as he had hoped it would. “We are trying to implement a framework that will help countries move to a more sustainable debt payment framework,” he said.

Panellists on an Africa-focused session agreed that while the impact of Covid-19 on the continent had been relatively mild, the pandemic had created an economic crisis that demanded collective action.

This meant “coming together as one continent, beginning urgently with the free movement of people,” said Dimieari Von Kemedi, co-founder and chief executive of Alluvial and Angalafintech.

Speakers discussing the Middle East were optimistic about economic recovery in the region, encouraged by the gradual opening of travel corridors and tourism.

“Some countries, such as Saudi Arabia and the UAE, are reforming their laws and economies relatively quickly,” said Sara Akbar, chair and chief executive of oil services company Oilserv, noting that others, including Kuwait, were lagging behind.

Reflecting on how Latin American countries had been hit hard by the pandemic, Mauricio Claver-Carone, president of the Inter-American Development Bank, said the priority was to ensure enough support was in place to put the region on a path to sustainable growth. “We cannot afford another lost decade,” he said.

The tourism industry is banking on pent-up consumer demand

Expecting tourism picking up in the summer, Kyriakos Mitsotakis, prime minister of Greece, said mass testing and vaccination passports would be key for his country:

“The idea behind the European Green Passport was to streamline these procedures rather than have bilateral arrangements,” he said. “I think most countries, at least the big tourist destinations, will follow a similar strategy.”

EasyJet chief executive Johan Lundgren criticised what he called the UK government’s “overabundance of caution” in reopening international travel, adding that it would “not be following its own advice” if it opened up travel to only a handful of countries.

In China, things are looking more promising, said Jane Sun, chief executive of Trip.com, the Chinese online booking site “We have seen a very strong rebound . . . which we are very excited about.”

Video: How the tourism industry can recover post pandemic

Tensions between the US and China remain high under Biden

In an interview with FT editor Roula Khalaf, US secretary of state Antony Blinken rejected claims of a ‘cold war’ between the US and China, saying countries should not have to pick sides as President Biden takes a tough stance on Beijing.

“This is all about doing our part to make sure that democracy is strong, resilient, and meeting the needs of its people,” he said, referring to the work western governments needed to do at home.

US trade representative Katherine Tai said she expected to meet her Chinese counterpart soon, in the first sign that the Biden administration was preparing to talk to Beijing about trade tensions.

“The most effective steps that we can take in order to have a durable, sustained, effective China policy on which there’s no question about American decline is if we are effective at home,” she said.

However, Elizabeth Economy, senior fellow at Stanford University’s Hoover Institution, noted that there had been no change in the “threat perception” of China in the US under Biden. “Substantively, they haven’t seen any relaxation on the most sensitive issues around Xinjiang, Taiwan or the tariffs,” she said.

Minxin Pei, professor of government at Claremont McKenna College, called for greater diplomacy in China-US relations: “If you stare down the path towards confrontation we are looking at a very dark future — neither country would win.”

Companies must build back better

“You cannot today be a strategic-minded leader of a corporation or a prudent allocator of capital if you don’t recognise that climate change is the mother of all financial impacting factors,” she said.

In a session addressing the prospects for a new investment cycle in commodities, Kathleen Quirk, president and chief financial officer of Freeport-McMoRan, said “the world is serious about the transition to clean energy, and that is going to create a level of demand that the industry is really not prepared for”.

Ivan Glasenberg, chief executive of Glencore, said the price of copper needed to rise 50 per cent to encourage enough new supply to meet projected demand from the global green revolution.

Panellists called for more collective action to improve gender balance after the crisis, which has had a disproportionate effect on women. “This has taken us back to 2017 levels in terms of women’s economic empowerment,” said Julia Gillard, chair of the Global Institute for Women’s Leadership at King’s College London.

“If a business doesn’t get policies right around how it assesses merit, so that workers from home and workers from the office are treated in a fair fashion, we could be baking gender inequality into the new world of work,” she said.

Speakers urged more openness and action on mental health amid concerns of the long-term psychological impact of the pandemic.

“When leaders are perceived to genuinely care about employees, business outcomes improve. That’s around attraction and retention, safety performance, ethical performance,” said Richard Heron, chief medical officer at BP. “That’s obvious to me as a health professional, but sometimes you have to demonstrate it.”

Margrethe Vestager, executive vice-president of the European Commission responsible for digital and competition policy, insisted that proposed regulations in Europe were to ensure a level playing field for business, not to prevent foreign investment: “The goal is simple and that is fair competition, full stop, no buts.”

Sir Nick Clegg, Facebook’s head of global affairs, commented on the decision by the company’s oversight board to uphold the ban on former US president Donald Trump from the social network. He said the lack of agreed regulation of social media platforms meant that Facebook had no option but to fill the void.

“We are trying to hold the decisions that Facebook takes as a private company to hold it to the fullest possible account and to make it transparent.”

Remote working has forced a change in employee expectations

Federico González, the chief executive of the Radisson hotel chain, said the pandemic had led to a “step change” in the need for flexibility in employment, which will have long-term consequences.

Jennifer Christie, chief human resources officer at Twitter, warned that companies must not ignore employees’ demands for a better work-life balance, more flexibility and the ability to live where they want to.

“They’re going to lose out on talent,” if they do, she said. “The people that they have will not stay and they will not be able to tap into a growing workforce.”

“There’s a group of people who want a return to control, but I think they are on borrowed time,” said Bill Schaninger, senior partner at McKinsey & Company. 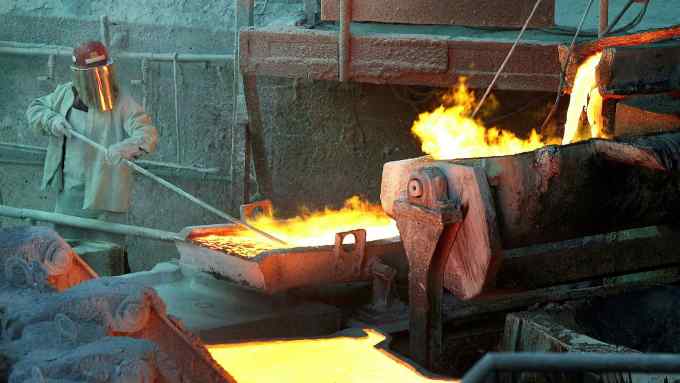