Get the newsletter now
French politics

French President Emmanuel Macron has won a decisive majority in parliamentary elections, giving him considerable power as he embarks on reforms to reinvigorate the economy and restore French influence in Europe.

Mr Macron’s party La République en Marche and its centrist ally Modem secured 350 of the 577 seats in the National Assembly, according to official results from the interior ministry.

The Socialists, the outgoing government, and its allies were crushed, holding on to only 44 of their 284 seats. The centre-right Republicans and allies will form the main opposition but with a disappointing 137 seats, down from 199.

The party of hard-left firebrand Jean-Luc Mélenchon, who performed strongly in the presidential election, will have 17 MPs, while the Communist party secured 10.

Turnout was just 43 per cent, a record low. The result is short of the crushing landslide some pollsters had predicted.

Still, the solid majority reinforces the legitimacy of the 39-year-old president, who only set up his up his cross-party movement 14 months ago. It clears the way for the contentious reforms he has outlined during his presidential campaign, including a bill this summer intended to make the jobs market more flexible. 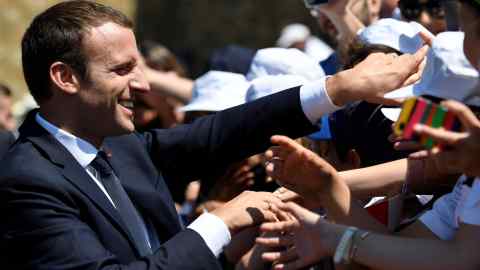 Sunday’s second-round parliamentary election is the latest of several recent seismic events that has transformed France’s political landscape. Six months ago Mr Macron, who had never held elected office, was deemed a rank outsider to become France’s head of state. Now, facing weak and divided opponents in parliament, he has vast authority.

The last round of a tumultuous election season will also complete the renewal of French politics. Hundreds of first-time MPs will sit in France’s lower house and as many as 40 per cent of the lawmakers will be women, up from a quarter.

The parliamentary polls have hastened the meltdown of the established parties that have governed France for the past four decades. Two months after the candidates for the centre-left and centre-right parties were defeated in the first round of the presidential election, their traditional voters failed to mobilise, with many deciding to give the new president a chance to prove himself following an impressive debut on the international stage and as the economy picks up.

“High abstention doesn’t mean hostility. There is a benevolent wait-and-see attitude towards Emmanuel Macron in the wake of his election,” said Jean-Daniel Levy, head of political surveys at Harris Interactive.

Mr Macron’s party may not have won the 400 or more seats some analysts predicted, but the margin of victory is more than comfortable. He will not even have to depend on his Modem allies for a majority. Furthermore, his opponents all fared badly. The Republicans’ score was their worst in decades.

The Socialists suffered a humiliating defeat and the party’s existence is now under threat. Jean-Christophe Cambadélis said he would stand down as party leader.

“The triumph of En Marche is unquestionable,” Mr Cambadélis said. “The defeat of the left is unavoidable. The collapse of the Socialist party is definitive.”

The far-right leader Ms Le Pen struck a note of defiance in her acceptance speech. “We are the only force of resistance against a bloc that represents the oligarchy,” she said.

But her victory in the north is small consolation for the party’s drop in support following her presidential defeat. It now faces a period of infighting over its direction and strategy, particularly whether its strongly anti-euro stance limited its appeal. The architect of that anti-euro approach, Ms Le Pen’s deputy Florian Philippot, failed to win a seat.