How Panasonic turned around its compliance culture

When Laurence Bates joined Panasonic as its general counsel in 2018, the Japanese conglomerate was struggling with a radical makeover of its century-old brand.

A multiyear transition under chief executive Kazuhiro Tsuga had shifted the group away from televisions and mobile phones to less visible but higher-margin businesses supplying batteries to electric carmaker Tesla and in-flight entertainment systems to airlines.

The goal was to create a nimbler global organisation but new business models also presented compliance risks, which in 2018 materialised as a corruption scandal at Panasonic’s avionics unit in the US.

Within a month after Mr Bates came on board, the Japanese group agreed to pay $280m to US regulators to settle anti-bribery allegations against its subsidiary. For the 62-year-old American lawyer, it was not the first time he had been approached by a company in the middle of a corporate scandal. The crisis also created an “opportunity” to take an active part in broader changes at a traditional Japanese icon, Mr Bates says of his decision to join Panasonic.

For a long time, [General Electric] had really set the standards and I have 22 years of that in my DNA

His appointment as Panasonic’s first non-Japanese director was also part of Mr Tsuga’s diversity drive to bring in outside talent to accelerate its transformation.

Diversity and inclusion has been a personal challenge for Mr Bates, who is gay and married with two children in a country where LGBT people often suffer discrimination and opt to hide their sexuality.

“That’s been my biggest personal challenge throughout my career in terms of keeping my family together in a society which, unfortunately, legally speaking doesn’t recognise it,” he says.

It was only in the past decade that Mr Bates publicly came out as gay, a decision he says was important in becoming an effective leader and role model for the younger generation: “If you can’t come across as being genuine because you’re hiding who you are in the workplace or wherever, I think ultimately you will be less effective and less confident.”

His career as an in-house lawyer began at General Electric in the early 1990s when the US industrial conglomerate was wrestling with a bribery scandal in Japan involving its medical equipment subsidiary.

Fluent in both Japanese and Mandarin, he spent more than two decades at GE in various legal roles in Asia, working with Ben Heineman, his mentor and former general counsel who revolutionised the role of in-house lawyer.

“Especially from a compliance infrastructure perspective, for a long time, they had really set the standards and I have 22 years of that in my DNA,” Mr Bates says.

If you can’t come across as being genuine because you’re hiding who you are in the workplace or wherever, I think ultimately you will be less effective and less confident

He then took his experience at GE to Lixil, where he spent four years as chief legal officer, helping the Japanese building materials group address accounting irregularities at its Chinese subsidiary.

At Panasonic, what he found was a challenge commonly faced by other Japanese companies with global operations. Having traditionally relied on a robust home market, businesses have often enjoyed a boost in overseas sales of their products without being heavily exposed to litigation and “without necessarily having to globalise along the way”, says Mr Bates.

But as Japanese businesses expand their global footprint through acquisitions and new businesses, they increasingly find themselves caught in legal and geopolitical disputes, forcing chief executives to put global compliance high on their agenda.

“The problem often arises where the infrastructure, policies and programmes are not in place to sufficiently make people aware of the risk that their new business model or new business activities may be taking them into,” he says.

In his first two years at Panasonic, Mr Bates concentrated on building a centralised legal and compliance function, cutting across company operations that had become siloed in the process of turning global. To create a more transparent culture, he consolidated more than 100 of its hotlines into one, so that employee complaints would directly reach its Osaka headquarters.

“It was kind of a culture of not necessarily escalating issues to the top because I think people were considered to be relatively autonomous in their business activities,” Mr Bates says.

It was also no longer sufficient to look at the financial results delivered by a subsidiary, as underlined by the corruption scandal at its in-flight entertainment unit. Previously, “as long as the business performance was looked at as being successful, there were not many processes in place from the headquarters level to question that in any meaningful way”, he adds.

Beyond compliance, Mr Bates has tried to enhance gender diversity by recruiting and internally promoting more women, particularly significant when for many Japanese companies progress in addressing gender imbalances has been slow. Now, seven out of 19 of his direct reporting team are female.

His mission to instil a transparent culture took on even greater urgency when the coronavirus crisis struck. In his dual role as chief risk officer, Mr Bates made sure the company responded properly to a set of new legal and compliance problems created by the outbreak, including the treatment of suppliers, dealings with governments and the handling of personal data involving sensitive health information.

The main challenge was to ensure that the compliance mindset he had helped to strengthen was not eroded as Panasonic focused on the pandemic’s economic impact.

Planting an early compliance awareness becomes even more critical as businesses navigate a tense geopolitical environment and nationalistic tendencies created by the outbreak.

“Even more so now than before, we have to be vigilant,” Mr Bates says. 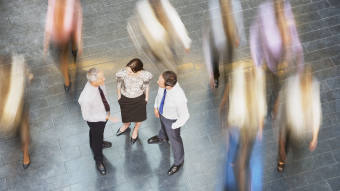