Jim Pickard in London, Chris Tighe in Newcastle and Andy Bounds in Southport

Boris Johnson has vowed to “do devolution properly” by giving the north of England greater control over its railways, an increase in powers for some elected mayors and a new body to strengthen the area’s economy.

The prime minister’s promise of increased powers over rail chimes with repeated demands from northern leaders.

Andy Burnham, Labour mayor of Greater Manchester, told the FT: “This gives us what we need to create GM Rail and . . . an integrated London-style transport system.”

However, he and other northern leaders said the powers would need to come with a London level of funding, which is far higher than those for the regions.

Mr Johnson told the Convention of the North in Rotherham: “On local lines in metropolitan areas, we will give greater control over fares, service patterns, rolling stock and stations.

“And outside the combined authority areas, I want communities to take control too.

“That might be through county councils taking on similar roles, in their areas, for stations or branch lines. Or it might be by transferring local branch line and rural services to community rail partnerships, owned by local people.”

The model is provided by London Overground, Tyne and Wear Metro and Merseyrail in Liverpool, Britain’s most punctual railway. The local authorities there set fares and timetables, and grant long concessions to a single operator.

Final details will be published after the government-ordered review of Britain’s railways by Keith Williams, former British Airways chief executive, in the coming weeks. Mr Williams has already said the current franchise system has “had its day” and greater priority must be given to passenger needs.

Last month political leaders in the north of England demanded a “Northern Budget”, including £7bn of transport infrastructure. They are also lobbying for £39bn to build the full Northern Powerhouse Rail east-west network by 2040.

Tees Valley, the North of Tyne, which includes Newcastle, and the Sheffield City region are the other areas of the north with elected mayors and Mr Johnson said he would “level up” their powers to those of Greater Manchester. He also said he hoped to conclude a deal with Yorkshire and other areas soon, creating more elected mayors.

But reaction was cautious because the prime minister, while pledging his commitment to devolution, had not consulted northern leaders before the announcement. 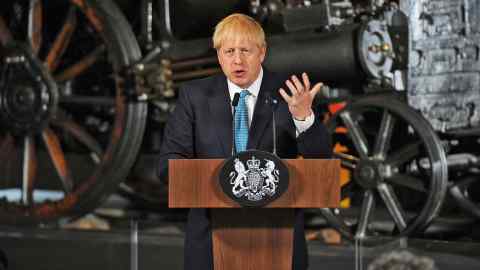 An indication the move had been rushed was evident when the prime minister, announcing to northern leaders that this “genuine partnership” would be led by a northerner “chosen in close consultation with you”, then indicated that the process for doing this had yet to be worked out.

It is not clear how this will sit with existing organisations, such as Transport for the North and NP11 — which represents the North’s 11 local enterprise partnerships. TfN warned the “devil is in the detail” on the proposed changes.

Roger Marsh, the NP11 chair, welcomed the creation of the growth body but said it should be “truly of the north and for the north”.

He told BBC Radio: “If the prime minister is going to talk about it, he has to be serious. This is more important for Britain’s economic future then whatever happens for Brexit, as important as Brexit is.”

Get alerts on Northern Powerhouse when a new story is published